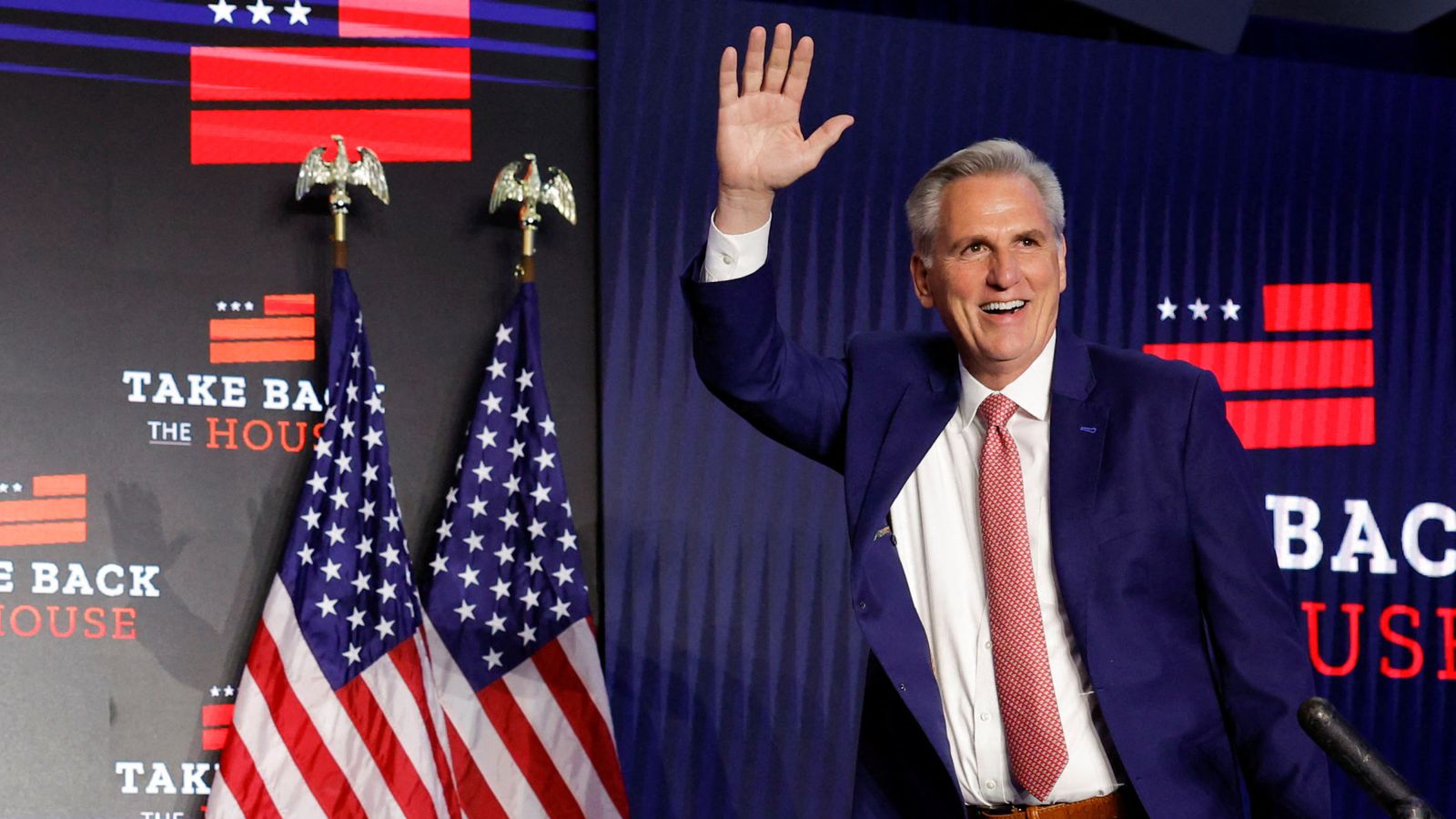 The Republicans have won back control of the US House of Representatives.

After two years of Democratic control of both the House and the Senate, the power dynamic in Washington will now shift.

It means President Joe Biden‘s administration could struggle to enact parts of its legislative agenda.

The Democrats did manage to keep control of the Senate after a key victory in the state of Nevada.

But the Republicans picked up enough seats to reach the 218 majority needed to win the House, NBC projections show.

However, the Democrats’ fear of a “red wave” of victory was averted.

The expected surge of support towards the Republican Party, many of whose candidates were endorsed by Donald Trump, failed to materialise, and it leaves them with a razor-thin majority.

Read more:
The midterms were a referendum on the extreme politics of the ‘Make America Great Again’ candidates

Republicans will now take control of key committees, giving them the ability to shape legislation and launch probes of Mr Biden, his family and his administration.

There is particular interest in investigating the overseas business dealings of the president’s son, Hunter Biden. Some of the most conservative lawmakers have raised the prospect of impeaching Mr Biden, though that will be much harder for the party to accomplish with a tight majority.

Any legislation that emerges from the House could face steep odds in the Senate, where Democrats won the barest of majorities.

Both parties are looking to a 6 December Senate run-off in Georgia as a last chance to pad their ranks.

Mr Biden congratulated House Republican leader Kevin McCarthy on the party’s win and said he was ready to work with them “to deliver results for working families”.

He added: “In this election, voters spoke clearly about their concerns: the need to lower costs, protect the right to choose, and preserve our democracy.

“As I said last week, the future is too promising to be trapped in political warfare.

“The American people want us to get things done for them. They want us to focus on the issues that matter to them and on making their lives better. And I will work with anyone – Republican or Democrat – willing to work with me to deliver results for them.”

Mr McCarthy tweeted that Republicans had “flipped the People’s House”.

The full scope of the party’s majority may not be clear for several more days – or weeks – as votes in competitive races are still being counted.

But they are on track to cobble together what could be the party’s narrowest majority of the 21st century, rivalling 2001, when Republicans had just a nine-seat majority, 221-212 with two independents.

Historically, the party in power almost always suffers losses in a president’s first midterms, and soaring inflation and concerns about the economy have been big factors in Mr Biden’s low approval ratings.

The House result comes a day after former president Donald Trump announced his intention to run for presidential election again.

The new Congress will be convened on 3 January 2023.