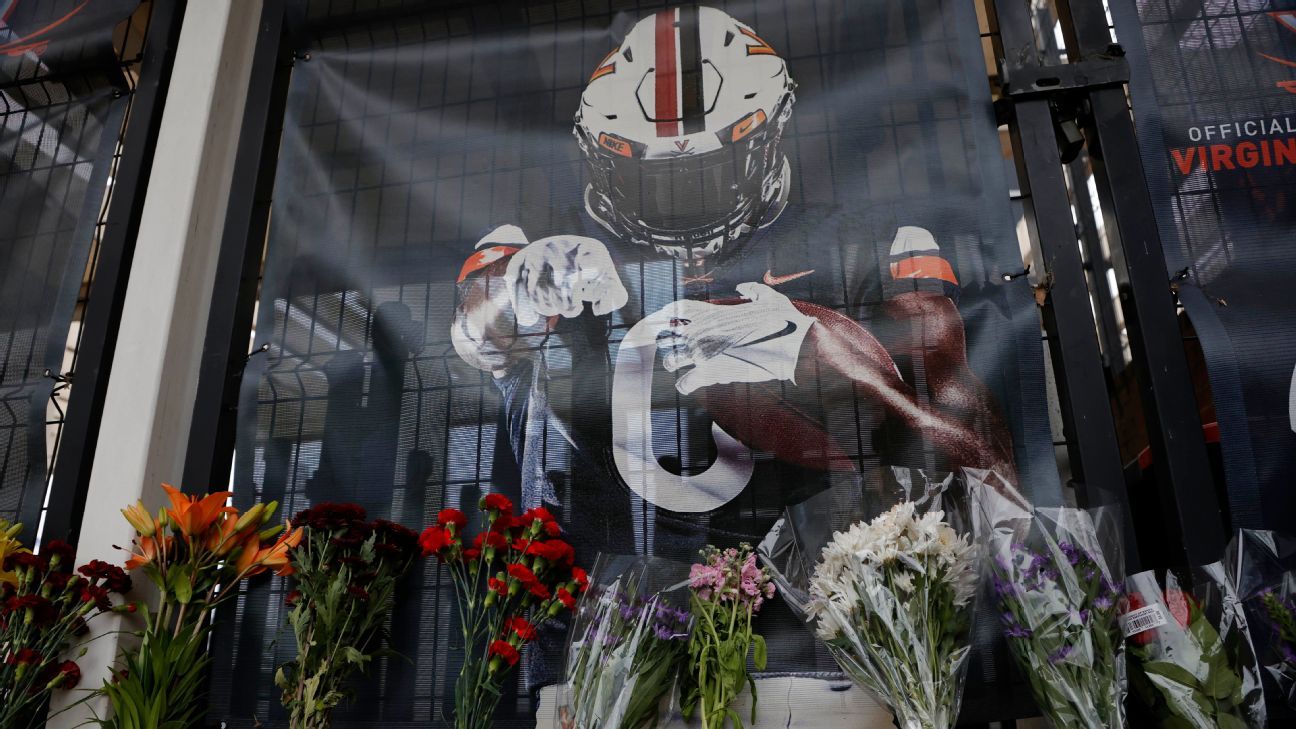 “The first meeting was really, really … ,” Elliott said, before fighting back his emotions. “Really tough.”

Elliott said his focus has been on helping his players deal with the shocking loss of three teammates. He has worked to ensure that the victims’ families have everything they need. He visited Hollins in the hospital on Tuesday.

“The best coping mechanism for me is the young men,” Elliott said. “To see their pain, to see their hurt, it inspires me to keep pushing forward.”

Athletic director Carla Williams said the Cavaliers haven’t yet decided whether they will play Saturday’s home game against Coastal Carolina. She said a decision would be made soon.

“We’ll make it together,” Williams said. “It will be a discussion with Coach [Elliott] and the team. Obviously, they’re going through a lot, and we want to make sure they’re involved as well. We’ll use our best judgment, but it will be soon. We’ll make a decision soon.”

Jones, 22, was transferred to the Albemarle-Charlottesville Regional Jail on Tuesday from a facility in Henrico County, Virginia, where he had been arrested without incident the day before. He was being held without bail on three felony charges of second-degree murder and firearm use in the commission of a felony. Additionally, Jones faces two counts of malicious wounding and additional gun-related charges, Albemarle Commonwealth’s Attorney James Hingeley told The Associated Press.

Jones is scheduled for a bond hearing at 9 a.m. ET on Wednesday, via video conference

Hollins’ family has said that he is one of the hospitalized victims.

“You prepare for this job [but] there is no chapter on something like this. So I am just trying to figure out how to be strong for these young men.”

Gordon McKernan, a spokesman for the Hollins family, told ESPN that Hollins had emergency surgery on Sunday night to remove a bullet from his stomach. Doctors performed a second surgery to check for internal injuries and were encouraged by what they found, according to McKernan.

McKernan said doctors removed Hollins from a ventilator after the second surgery.

A University of Virginia official confirmed to ESPN on Tuesday that the other student who survived was a female and a non-athlete who is considered to be in good condition.

Jones was a walk-on member of the Virginia football team in the fall of 2018. He had a pre-existing lower-body injury when he arrived on campus, according to former Cavaliers coach Bronco Mendenhall, and was unable to practice or play in a game. Jones left the team the next semester, according to Mendenhall.

Mendenhall, who coached the Cavaliers from 2016 to 2021, didn’t recall Jones having any disciplinary issues in his short time with the team.

“It doesn’t make sense to me,” Mendenhall said. “I know he remained a UVA student. But I don’t have any other understanding of it. He was a classmate of these guys and there were other players in the same class, so I just don’t understand it. I wish I could provide more insight but his time with the program was so short and so long ago. There was never anything that came across my desk with any discipline or behavior issues. And with being hurt the whole time, he wasn’t really integrated into the program in that one semester.”

Classes are expected to resume Wednesday, but undergrads will not be required to complete any graded assignments or take exams before Thanksgiving break.

ESPN’s David Hale and The Associated Press contributed to this report.