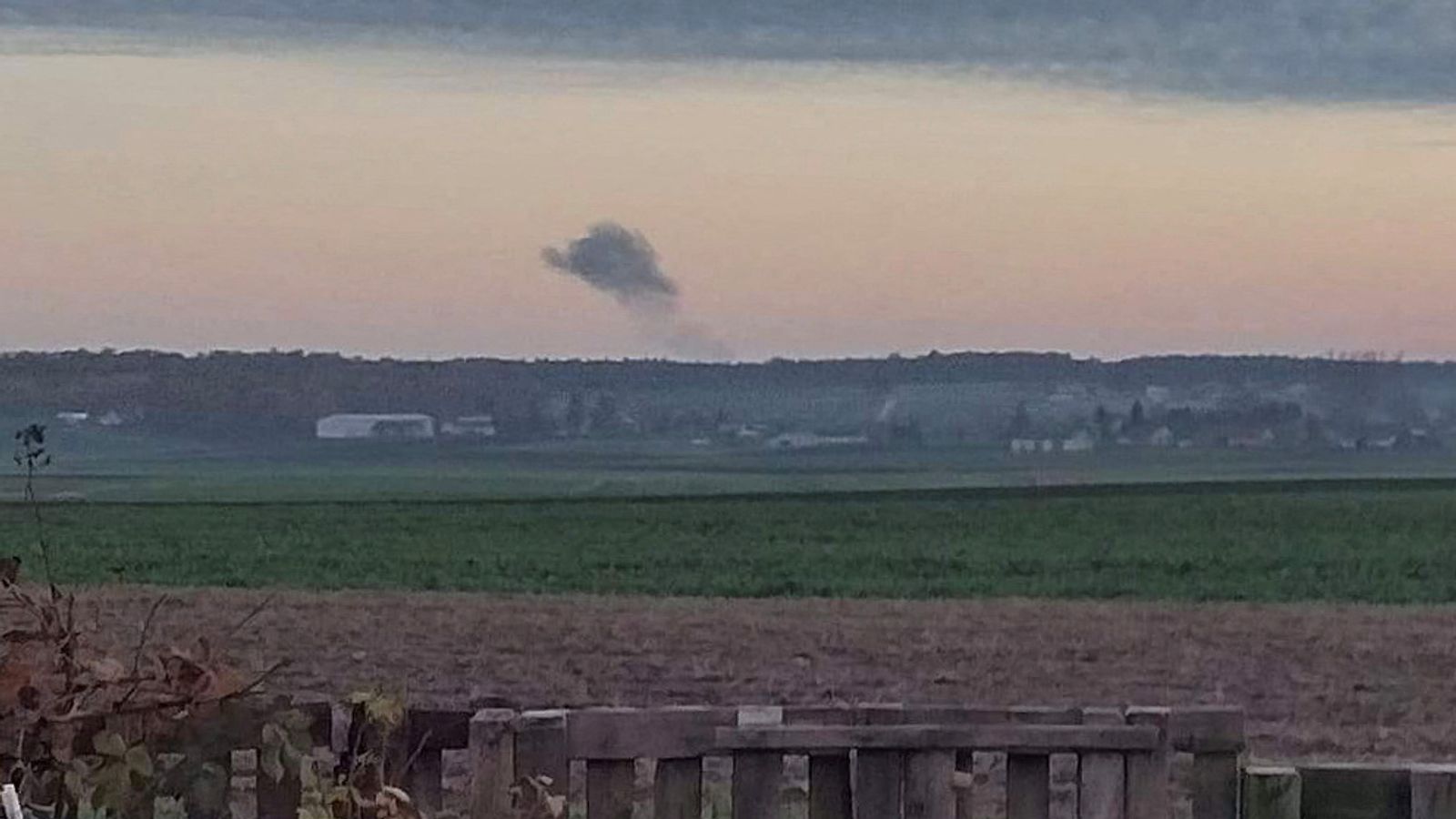 Two people are reported to have been killed in Poland near the Ukrainian border by a Russian missile.

It didn’t take long for talk of Article 5 to surface – the part of the North Atlantic Treaty that binds all NATO members to protect the country that has been attacked.

But going straight for Article 5 skips a number of important steps that must be taken.

What is the next step?

General Sir Richard Barrons, former commander of UK Joint Forces Command, told Sky News: “All eyes will now be on the site of the explosion, and experts in the technology will be looking for the missile debris and other debris to identify what it was that killed these two poor souls.

“And then when they’ve identified what it was, they can start to investigate how it got there and what was behind it.

“And really only when that is clearer – and clear, in my view – should the North Atlantic Council and NATO members take a definitive position on this.

“Because, to do so beforehand would imply they were prepared to decide on something really significant in the absence of actually knowing the facts.”

General Sir Richard said many of these facts will probably be established in daylight – it was late when the explosion happened – and he added that bits of the missile can be found and radar tracks through the sky can also be examined.

Lord Richard Dannatt, former chief of the general staff, explained to Sky News the importance of this stage, saying: “If we take – or anybody takes – decisions on poor information then we’re bound to make poor decisions.”

So what happens while the investigation is under way?

Lord Dannatt said that one of the most important things at this stage is that the countries involved keep talking, saying: “The open channels and back channels should be being worked vigorously at the present moment to find out not just what happened but why it happened.”

At the same time, the other vital thing is what Lord Dannatt and General Sir Richard described as “cool heads and facts”.

Lord Dannatt said: “Establishing what has happened is really important and then cool heads are needed to analyse what our response should be.

“At this stage, we should be very, very cautious.”

General Sir Richard added: “We need to know what happened, what the intent was behind it and then people should take a view on it.

“I think an international junior school football match whirring up the rhetoric around this is deeply unhelpful.”

Read more:
‘Russian missile’ kills two in Poland
Missile strike on Poland may be an attempt to test NATO

What is likely to have happened?

Lord Dannatt said there are two possibilities – a Russian error or the Russians testing NATO’s response.

He said: “Modern technology is pretty accurate, so it’s quite difficult to explain a way that this might have been an accident.

“If it wasn’t an accident and it was a test of the West’s response, that’s something that has got to be thought through very, very carefully.

“Cool heads are required to make sure this appalling war does not get escalated as a result of miscalculation.”

General Sir Richard said: “We should recognise it’s probably unlikely Russia would choose to target a random grain silo in a village with a population of just 400 to start a war with NATO.

“But if Russia has decided to do that, then this world of ours is taking a turn that no one could have imagined even a month ago.

“It’s far more likely that a missile has gone rogue – it has malfunctioned or been deflected – and ended up in Poland with tragic consequences.”

What is Article 5 and why are we even talking about it?

Article 5 is perhaps the best-known part of the North Atlantic Treaty – the collective defence principle that means an attack against one member is considered an attack on all.

It was not invoked when Russia invaded Ukraine, because Ukraine is not a NATO member. But Poland is a NATO member, so anything that is found to have been an attack on Poland could possibly reach the stage of Article 5.

So does that mean the UK and other NATO countries have to go to war now?

Hold your horses and breathe. We’ve already talked about the need for an investigation. But even then, before Article 5 comes Article 4.

Article 4 says: “The parties will consult together whenever, in the opinion of any of them, the territorial integrity, political independence or security of any of the parties is threatened.”

Late on Tuesday night, NATO spokesperson Oana Lungescu told Sky News that the alliance’s secretary-general, Jens Stoltenberg, will chair an emergency meeting of the 30 member states in Brussels on Wednesday.

Reuters news agency reported that this meeting is at the request of Poland on the basis of Article 4.

The report cited two European diplomats, one of whom said the alliance would act cautiously and needed time to verify exactly what had happened.

It’s not clear what form this stage will take or how long it might last.

Any country can invoke Article 4 and NATO’s own website says that all decisions are made by consensus.

Article 4 does not always have to lead to NATO entering a conflict.

Has Article 4 been invoked before?

Since NATO was created in 1949, Article 4 has been invoked seven times and you’ll see below that all-out war is not the default response:
• On 24 February 2022, Bulgaria, Czechia, Estonia, Latvia, Lithuania, Poland, Romania and Slovakia requested to hold consultations under Article 4 following the Russian invasion of Ukraine
• On 26 July 2015, Turkey made the same request following terror attacks and to inform allies of the measures it was taking
• On 3 March 2014, Poland invoked it as tensions increased in Ukraine as a result of Russia’s aggressive actions
• In 2012, Turkey invoked it twice – once in June after one of its fighter jets was shot down by Syrian air defence and in October when five Turkish civilians were killed by Syrian shelling. In November, NATO agreed to Turkey’s request for the deployment of Patriot missiles as a defensive measure
• On 10 February 2002, Turkey invoked the article as a result of the armed conflict in neighbouring Iraq. NATO agreed a package of defensive measures and conducted Operation Display Deterrence