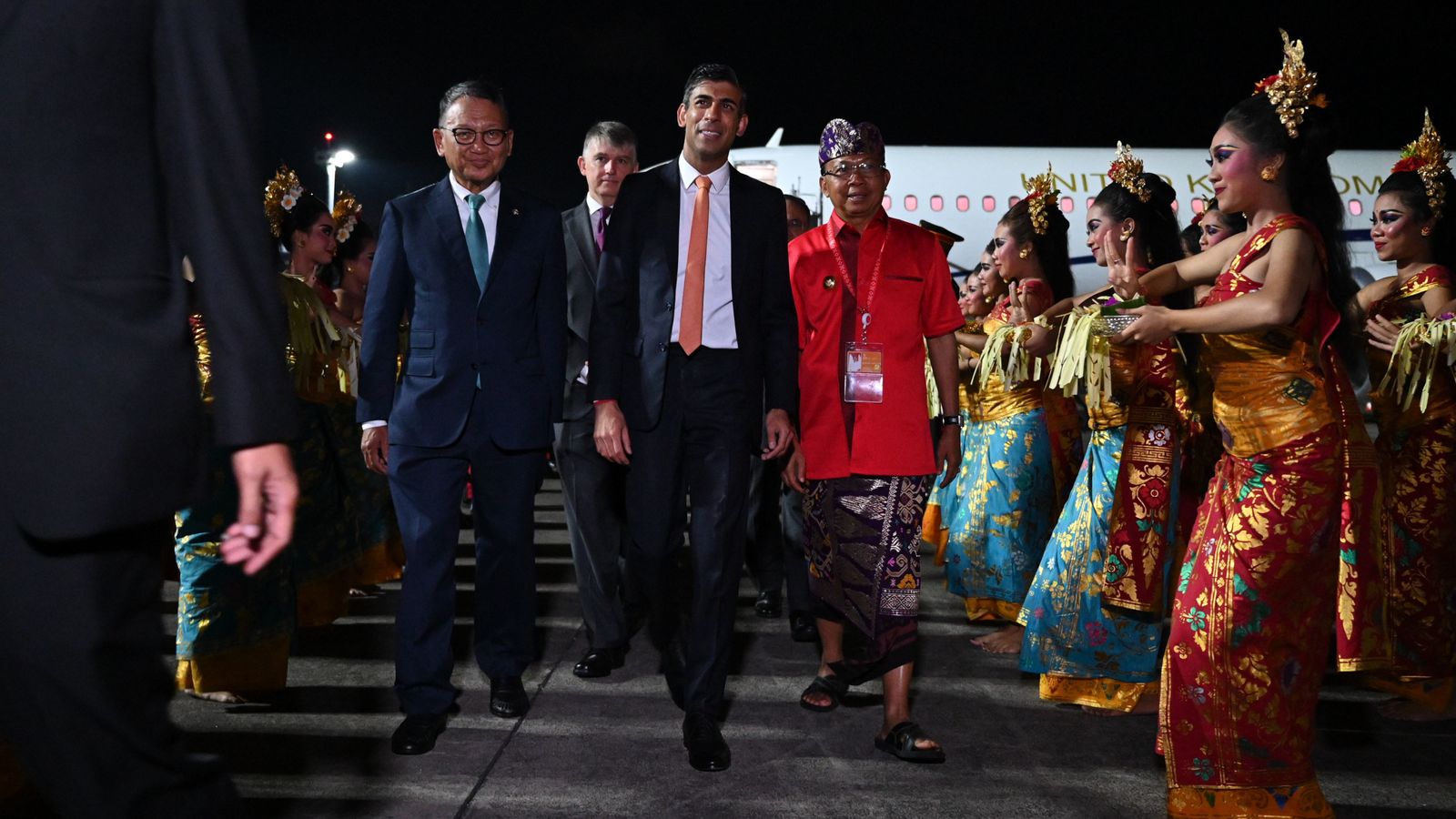 Vladimir Putin’s regime “will hear the chorus of global opposition to its actions”, Rishi Sunak has warned as he prepares for the first day of the G20 summit.

The UK prime minister will sit down with leaders of the world’s 19 biggest economies in Bali – the first meeting in the group’s 15-year history to be held in the shadow of a major European war instigated by one of its members.

Russia invaded Ukraine almost nine months ago, leaving the rest of the world struggling to deal with the fall-out, which has included rising food and energy prices.

But many countries have stood firm, supporting Ukraine with weapons and aid, while imposing various sanctions on Russia.

Mr Sunak will use the summit to push the world’s most powerful economies to do more to reduce their dependence on Russian exports, while supporting others to do the same.

He said: “There can be no normalisation of Putin’s behaviour, which has no place in the international community.

“Russia’s actions put all of us at risk.

“As we give the Ukrainian people the support they need, we are also harnessing the breadth and depth of UK expertise to protect ourselves and our allies.

“This includes building the next generation of British warships.

“Putin and his proxies will never have a legitimate seat at the table until they end their illegal war in Ukraine.

“At the G20, the Putin regime – which has stifled domestic dissent and fabricated a veneer of validity only through violence – will hear the chorus of global opposition to its actions.”

During the first day of the G20 summit, Mr Sunak is expected to speak at a session on food and energy security, before a session on health, and a meeting with the representative from Saudi Arabia.

Last week the UK introduced legislation to stop countries using its maritime services to transport Russian oil unless it is purchased below a price cap – something No 10 described as a “hugely influential measure, given the UK provides around 60% of global maritime insurance”.

Mr Sunak will also reiterate the UK’s financial support for Ukraine, saying he committed £4.1bn in aid when he was chancellor.

This included £2.3bn in military aid and Mr Sunak will promise to match this level of spending next year.

Meanwhile, to strengthen the UK’s defence, Mr Sunak has announced the next phase in the Type 26 frigate programme, with a £4.2bn contract awarded to BAE Systems to build five more ships for the Royal Navy, in addition to the three already under construction.

No 10 said the project will support 1,700 jobs at the BAE Systems sites in Govan and Scotstoun in Glasgow over the next decade, with 2,300 jobs supported in the supply chain across the UK, although it was not specified how many of these jobs would be new.

Ukraine war: Hope and hardship inside the maternity ward in newly liberated Kherson
World population to hit eight billion – as projections reveal where is growing the fastest