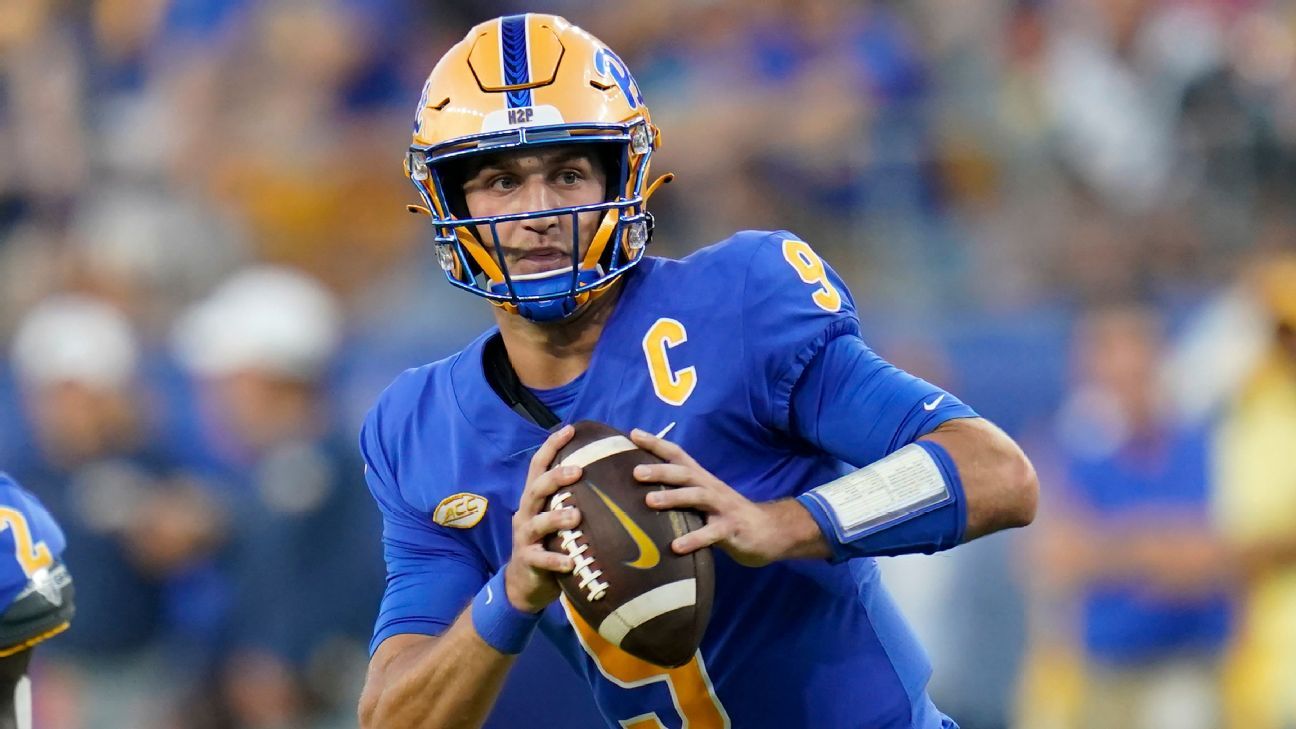 Slovis is last in the conference in touchdown passes (six) and ranks in the bottom half of the ACC in yards passing (seventh), pass efficiency (10th) and completion percentage (10th).

Not exactly what Slovis had in mind when he committed to Pitt last December. While he allowed he is dealing with some level of frustration, he added “that (frustration) is there probably in every season I played.”

An injury suffered late in the second quarter of what became an overtime loss to Tennessee on Sept. 10 blunted any early momentum. He sat out a victory over Western Michigan before returning against Rhode Island. By then the offense’s identity had already begun shifting from the pass-happy approach of 2021 with Pickett and former offensive coordinator Mark Whipple to the more run-heavy attack led by breakout star Israel Abanikanda.

Slovis anticipated the learning curve to be steep while trying to find common ground with first-year offensive coordinator Frank Cignetti. It turned out to be even more difficult than he imagined.

“It’s a big process for everyone,” Slovis said. “And for me, obviously, I haven’t played an offense like this.”

There were signs of improvement in a victory over Virginia last week. Slovis threw a 31-yard touchdown pass to Bub Means, then managed the game after the Panthers took a 28-point, first-quarter lead. Slovis pointed to the uptick in shots downfield as proof of his increased comfort with Cignetti’s game plan.

Still, Slovis will not participate in the team’s Senior Day festivities, though he was careful to point out the decision was based more on logistics — only select members of his family were available to make the trip — than any sort of definitive hint that he will return.

Pitt head coach Pat Narduzzi has repeatedly supported Slovis and publicly endorsed Slovis’ potential return in 2023. While the NFL likely isn’t an option at this point, Slovis could transfer and would likely be cleared to play immediately.

His best option is to run it back with the Panthers, though he said knowing who will or won’t be around will play a “big part” in whatever decision he makes. Narduzzi need not look far for evidence of how a transfer quarterback can thrive in year two with a program.

Nate Peterman’s numbers were so-so when he took over as the starter in 2015, Narduzzi’s first year with the Panthers. The following season Peterman threw for 27 touchdowns against seven interceptions before getting drafted by Buffalo.

Slovis said Peterman’s journey didn’t come up in his initial talks with Narduzzi and reiterated he is going to take his time before making anything official.

“We’ve got two more games, we’re focused on that,” Slovis said. “But really (Narduzzi and I are) just organizing the types of things I need to know or the information I need to get to make a decision.”