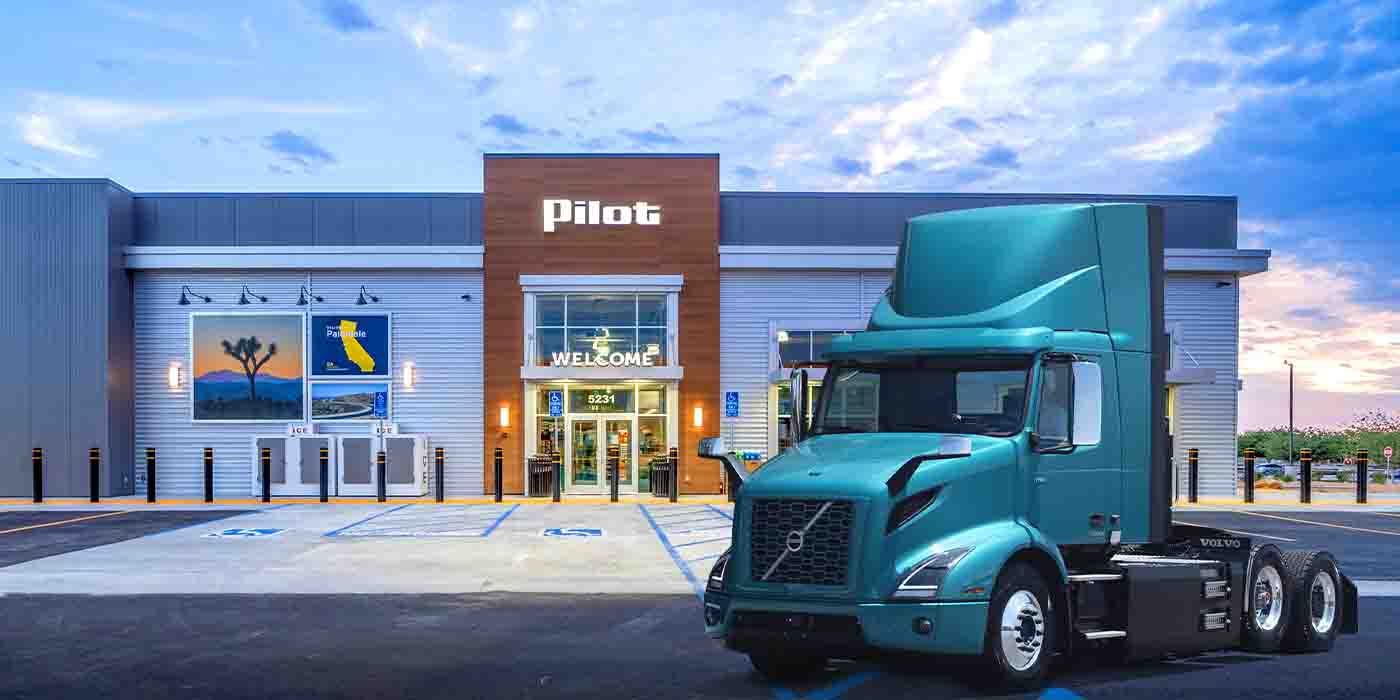 Pilot Company and Volvo Group have signed a letter of intent to co-develop a charging network across Pilot and Flying J travel centers, catered specifically toward medium- and heavy-duty EVs. Both companies look to reduce carbon footprints on populated roadways by overtaking some of the infrastructural roadblocks currently inhibiting widespread adoption of commercial EVs.

Pilot Company is a network of travel centers founded in 1958 that currently consists of over 750 locations across 44 states and six Canadian provinces. While the roadside network of pit stops still supplies over 14 billion gallons of fuel to drivers each year, Pilot Company has had the foresight to prepare for the EV revolution that’s merely beginning to reach its tipping point in North America.

As part of its New Horizons program, Pilot Co. has committed $1 billion toward an overhaul of all its locations, adding features like free Wi-Fi, expanded seating and lounges, new restaurants, and shopping. This initiative also includes bolstered EV charging infrastructure.

This past July, the Pilot announced a collaboration with General Motors and EVgo to implement a network of 2,000 DC fast chargers across the entire US, specifically serving passenger EVs. Now, Pilot looks to provide charging ease to its commercial EV customers as well with the help of heavy-duty truck manufacturer, Volvo Group.

Pilot and Volvo look to bolster commercial EV charging in US

Pilot Company shared a press release today, sharing news of its intentions to partner with Volvo Group – the commercial vehicle umbrella in charge of Volvo Trucks, Mack Trucks, Renault Trucks, and many more.

Details remain rather vague at this point, but both parties have signed a letter of intent to develop a “high-performance” charging network across Pilot Company’s US footprint of travel centers. From Pilot’s end, the implementation of commercial EV charging falls under the aforementioned “New Horizons” initiative, while both parties seek funds from federal, state, and local agencies to help accelerate the charging network’s progress. Per Pilot Co. CEO Shameek Konar:

Pilot Company is eager to help our customers attain their sustainability goals by partnering with the Volvo Group to develop the infrastructure and systems needed to move towards a more decarbonized future. Volvo Group’s proven expertise in electric trucks combined with our nationwide travel center network and robust energy platform leverages our respective knowledge and resources to advance the nation’s charging infrastructure. We look forward to working together to develop a holistic solution for electrified fleets, further enabling the transportation industry’s energy transition.

Unlike its work with GM to implement passenger EV charging, Pilot and Volvo Group have not shared where the charging equipment is coming from, but perhaps we see a third party involved in the network as it progresses forward.

To begin, Pilot and Volvo Group said they intend to implement commercial EV chargers at Pilot and Flying J branded travel centers based upon current and anticipated medium- and heavy-duty EV density and customer needs. Additionally, public funding to support the infrastructural costs will also play a role in which travel centers will be equipped with commercial EV charging solutions first.

That being said, neither company has shared a timeline as to when we can expect to see the first Pilot or Flying J stations serving charging solutions to both commercial and passenger EVs, but let’s hope its sooner rather than later.