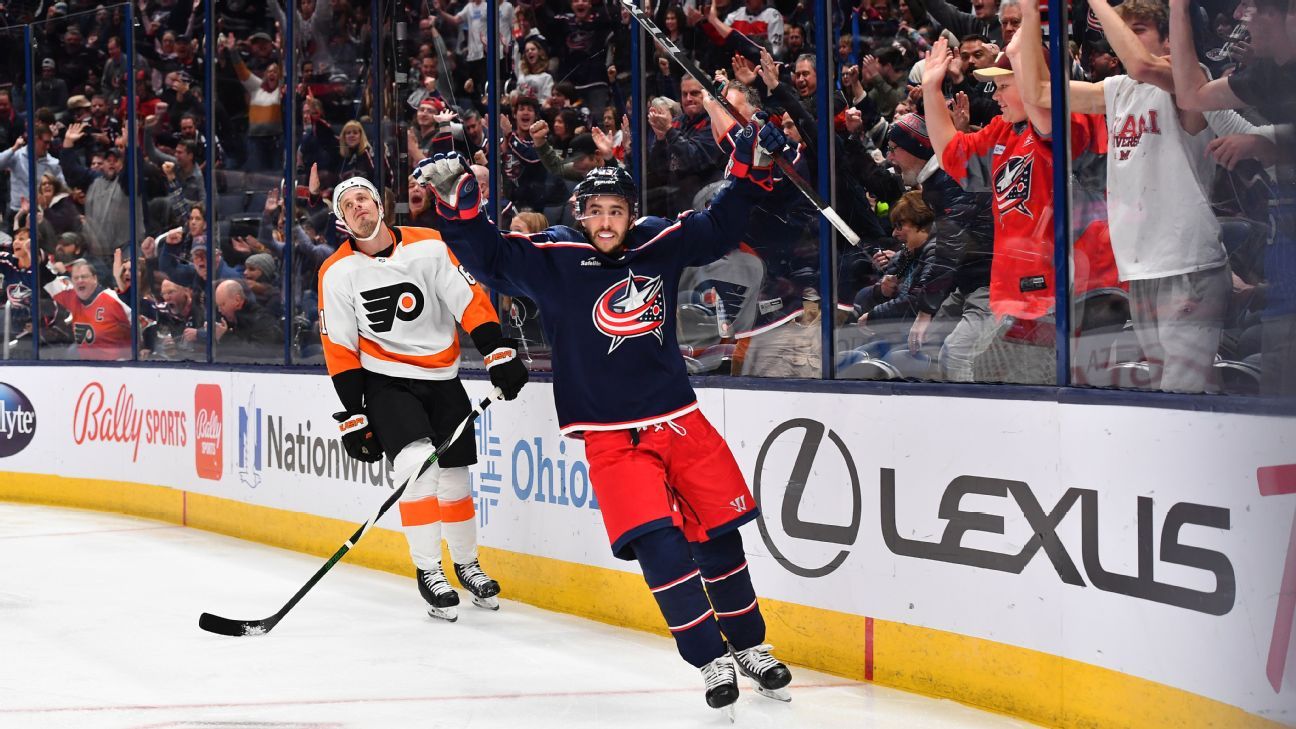 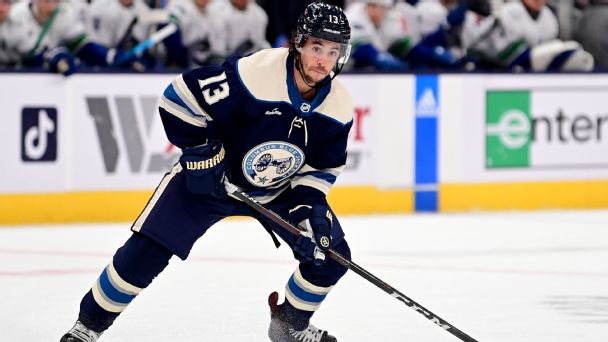 Watch Johnny Gaudreau and the Columbus Blue Jackets take on the Philadelphia Flyers on ESPN+ and Hulu (7:30 p.m. ET).
• How to watch
• Subscribe to ESPN+
• Stream the NHL on ESPN

“It’s nice to hear a fan base wanted you and didn’t get you, but I didn’t expect to hear things for this long,” Gaudreau said. “A lot of players in my position end up re-signing with their teams. [Filip] Forsberg [in Nashville], [Nathan] MacKinnon in Colorado. I went in a different direction.”

The spotlight is likely back tonight when the Blue Jackets face the Flyers (7:30 pm, ESPN+/Hulu), another team Gaudreau was linked to.

Columbus (4-9-1) has stumbled out of the gate, hampered by a brutal series of injuries. But Gaudreau — who has 12 points in his first 14 games, including all six of his goals at home — focuses on positivity.

Choosing Columbus was inherently about what was best for Gaudreau the person. And even if his tone has shifted a bit one month into the season — settling into the team’s current reality — his free agency decision was always a long play.

“I’m here for the long run,” Gaudreau said. “I obviously want to make the playoffs this year but if it doesn’t happen yet, you have to learn from those things. I’m not putting it past our team to get out of this funk, but I also know whatever happens, we have a lot to look forward to.”

Werenski noted that for years the Blue Jackets were known as a defensive team, but now had several skill players that would change the identity. And after being stuck with the narrative as a place guys didn’t want to stay, the opposite was happening.

“Our identity is changing,” Werenski said. “And I can’t wait to be a part of it.”

But after Laine missed two weeks with an elbow sprain – returning just in time for the teams’ trip to his native Finland – the winger sprained his ankle against the Islanders and is sidelined another three to four weeks.

Laine and Gaudreau are supposed to team up on Columbus’ top line. Gaudreau said by the end of preseason, he and Laine “were really starting to understand each other” as they figured out details in their game, like anticipating when Laine wanted the pass. They were just starting to get going again after Laine’s setback, “which has been tough,” Gaudreau said.

The prognosis was worse for Werenski; the team’s top defenseman is expected to be out for the rest of the season with a shoulder injury he sustained last week. “I felt more bad for [Werenski] than anything, because he was super excited about this season,” Gaudreau said. “It just sucks. He’s such a leader on this team.”

Gaudreau said he has no choice but to focus on the positives — and the biggest positive is that younger players will get important reps. “The young guys with skill on this team are so impressive,” he said. “Cole Sillinger, Kent Johnson and Yegor Chinakhov. It’s fun to hang out with them and play with them every day at practice.”

In Calgary, Gaudreau was middle of the pack when it came to experience. In Columbus, he’s the fourth-oldest player on the team. And he feels a responsibility to speak up more, paying forward the mentorship moments he benefited from early in his career.

As for an assessment on his own game? “My defensive game has gotten better;” he said. “Maybe I was slacking a little bit to start the season, but I feel good about how it’s going.”

Gaudreau falls back on the message that he received from coach Brad Larsen before the season: “He told me, ‘I want you to do the same exact thing you did in Calgary, be the same player. Remember, you’re just one player. You can’t carry a team by yourself.'”

IT WASN’T UNTIL three or four weeks ago that Gaudreau said he finally felt settled in Columbus. He described the move as “hectic.” Then in October, he and his wife, Meredith, welcomed their first child, a daughter named Noa.

He’s already feeling the lifestyle changes of fatherhood. Less time hunting, one of his favorite activities to get his mind away from the rink. Less time playing video games with buddies. And a lot less sleep.

It’s all been eased by the move East — the crucial factor in his decision. Travel in the Eastern Conference has been significantly less burdensome. “Plane rides are a lot shorter. And besides the Finland trip, I think I’ve only spent 5-6 nights in a hotel,” he said. “So it’s a lot more time at home, and less on the road. And we’re also close to family now. My parents can now come out for a random Sunday night game, which wasn’t possible before.”

Gaudreau says he’s recognized less in Columbus than he was in Calgary, but the interactions feel more meaningful.

“People come up to me and say, ‘thanks for choosing Columbus, thanks for believing in us, it means so much to us'” Gaudreau said. “And that means a lot to me.”

Because the process to find his new home wasn’t easy.

“Honestly if I had to do free agency again, I don’t know if I would’ve done it,” he said. “The fan base in the city you’re in wants you back, that’s hard on you as well. It was a pretty rough two-to three months there.”

He knows that people will always talk, but there was one narrative that didn’t sit well.

“People thought I was trying to chase money but that’s the farthest from the truth,” he said. “It was about what was best for me and my family and my wife and her family. I love the city here in Columbus, I love the team here, I’m really excited to be here. Even if it wasn’t the start we wanted, I wouldn’t change my decision for the world.”