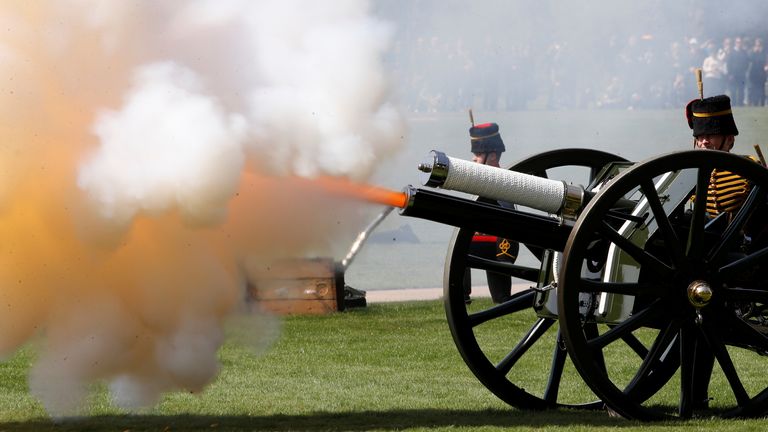 King Charles will have his first birthday as monarch marked with a Changing of the Guard honour and special gun salutes.

The King‘s 74th birthday today will see the Band of the Household Cavalry performing Happy Birthday during the Changing of the Guard ceremony at Buckingham Palace.

Gun salutes will be fired across the capital in honour of his birthday for the first time, with the King’s Troop Royal Horse Artillery firing 41 volleys from midday at London’s Green Park.

Immediately afterwards, the Band of the Scots Guards will also perform Happy Birthday in the park.

The King’s Troop is a mounted ceremonial unit in the British Army that fires salutes on royal anniversaries and major events like state visits, and provides a gun carriage and a team of black horses for state and military funerals.

In 1827 the Board of Ordnance ordered 41 guns was the correct Royal Salute when fired from one of the royal parks or the Tower of London.

An hour after the first 41-gun volley, the Honourable Artillery Company will fire a 62-gun salute at the Tower of London.

The figure of 62 marks 41 for the Royal Salute from a London saluting station and 21 from the City of London.

Charles is expected to personally mark his 74th birthday privately.

He became king after the death of the Queen on 8 September and has since had a busy period.

As Prince of Wales, he was sometimes away on official foreign tours during his birthday and would celebrate it overseas with a cake.

Queen Elizabeth II famously celebrated two birthdays, one in the summer and another in the spring, and King Charles is expected to follow suit by announcing a spring, official, birthday.

King George II introduced the idea of a second birthday for the monarch as his actual birthday, like Charles’s, was in November, when the weather made public celebrations such as parades more difficult.

The King spent the day before his birthday leading the nation in honouring its war dead during the annual Remembrance Sunday service at the Cenotaph.

His floral tribute to the fallen left at the memorial in Whitehall featured the words “In memory of the glorious dead. Charles R”.