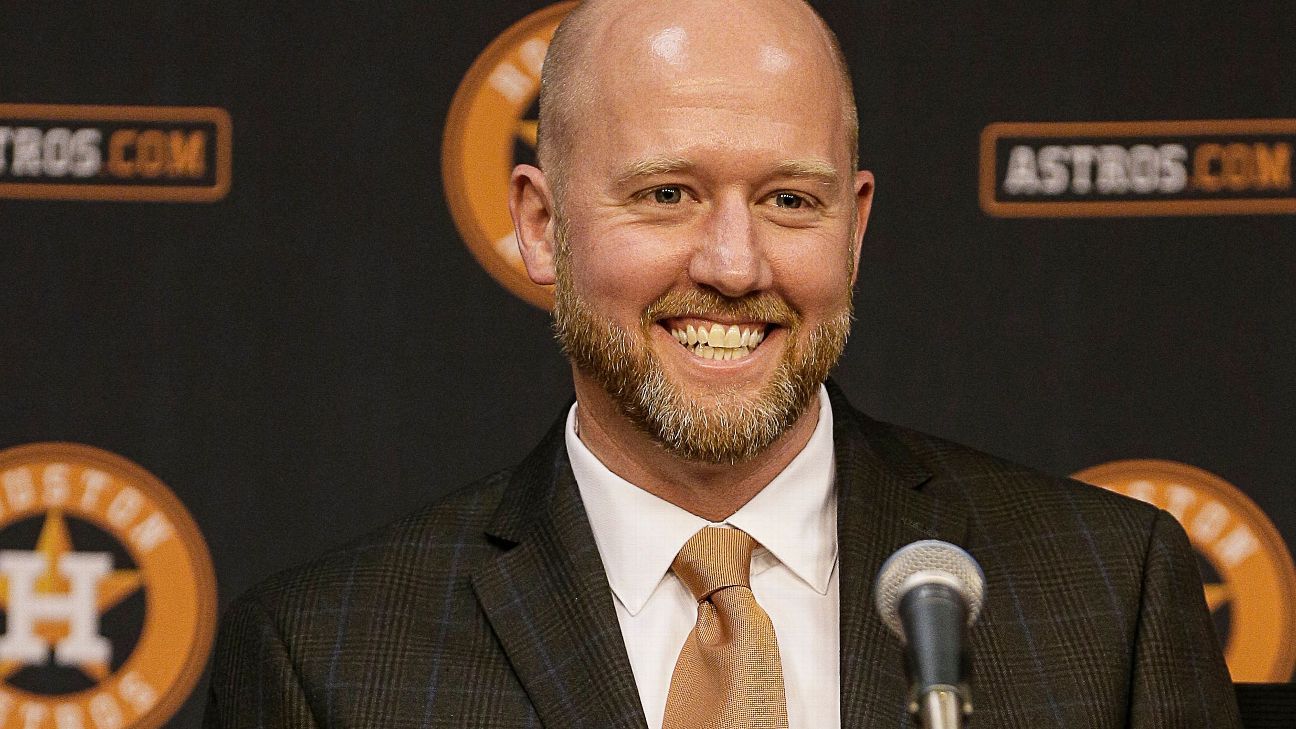 The Houston Astros announced Friday that they “will not enter into a renewal for the 2023 season” with general manager James Click, a bizarre conclusion to a three-year run that culminated in a championship and somehow ended in divorce.

Click and manager Dusty Baker saw their contracts expire at the end of October and were offered only one-year deals earlier this week by Astros owner Jim Crane in the wake of the team’s World Series triumph. Baker, 73, opted to accept his. Click, 44, and Crane spent the week negotiating on a contract that ultimately did not come to fruition, leaving the makeup of the Astros’ baseball operations department in doubt.

Crane, in his statement, wrote that the Astros are “grateful for all of James’ contributions,” a stark deviation from the tension that had grown obvious.

“We have had great success in each of his three seasons, and James has been an important part of that success,” Crane continued. “I want to personally thank him and wish him and his family well moving forward.”

Click joined the Astros early in 2020, after Major League Baseball’s investigation into the team’s sign-stealing practices prompted the firings of GM Jeff Luhnow and manager AJ Hinch. He was brought in a few weeks after Baker, a forced marriage that nonetheless presided over three consecutive appearances in the American League Championship Series.

The Astros won their first title since 2017 last Saturday, defeating the upstart Philadelphia Phillies in six games, but questions continued to hover over Click’s status and tension had grown between the two. Crane’s involvement in baseball operations decisions grew and his trust of Click continually eroded as the season went on, sources said. A deal Click previously agreed to for offensive-minded catcher Willson Contreras was nixed, sources told ESPN’s Jeff Passan. Hall of Famers Jeff Bagwell and Reggie Jackson continued to have a greater influence.

Crane nonetheless offered Click a contract for 2023 on Monday, the day of the Astros’ parade through Houston, but Click showed up to the general managers’ meetings in Las Vegas the following afternoon without an agreement in place. A news conference was scheduled for Wednesday, but Click said he didn’t know anything about it. Click said then that he and Crane were still “having discussions” on a new deal, expressing hope that something would come together.

Crane echoed those sentiments at a news conference that celebrated only Baker’s return about 24 hours later but did not go into specifics. Baker said he had a “good relationship” with Click, adding: “We’ve accomplished some good things together in a short period of time. And so people always looking for if there’s some conflict or not getting along or whatever, but that’s not the case.”

The issues, however, seemed to be more driven up top, exemplified by Click receiving only a one-year offer after a title.

Those circumstances normally warrant a lengthy extension and a significant raise for a GM; that was not the case for Click. Instead, he becomes the first head of baseball operations to not return in the wake of a title since Larry MacPhail resigned as the New York Yankees‘ general manager 75 years ago. Click’s departure predictably heightened speculation that David Stearns, the former Astros assistant GM who stepped down as the Milwaukee Brewers‘ president of baseball operations two weeks ago, could return to Houston. But Stearns, who is under contract through 2023 and has promised to stay on in an advisory role, squashed those rumors, telling MLB.com, “I’m not going anywhere.”

In addition to Click’s departure, the Astros also fired assistant general manager Scott Powers, sources told Passan. Powers was a former executive with the Dodgers who was brought in as an assistant GM by Click in January.

Click, suddenly a free agent, could navigate a path similar to the one carved out by Alex Anthopoulos, who stepped down as GM of the Toronto Blue Jays following the hiring of president Mark Shapiro, then spent two years in the Los Angeles Dodgers‘ front office before taking over as president of baseball operations for the Atlanta Braves — the team that defeated the Astros in last year’s World Series.

“We’re different,” Click, speaking Tuesday, said of the dynamic between he and Crane. “Jim is — well, look, let me clarify. There’s some things that we do very differently. There’s some things that we are very lined up on and that’s going to be true of any relationship between a boss and an employee. I think he likes to act very quickly. In certain cases, I tend toward a more deliberate approach. He is very demanding, but he also gives you the resources to accomplish what he tasks you to do.”