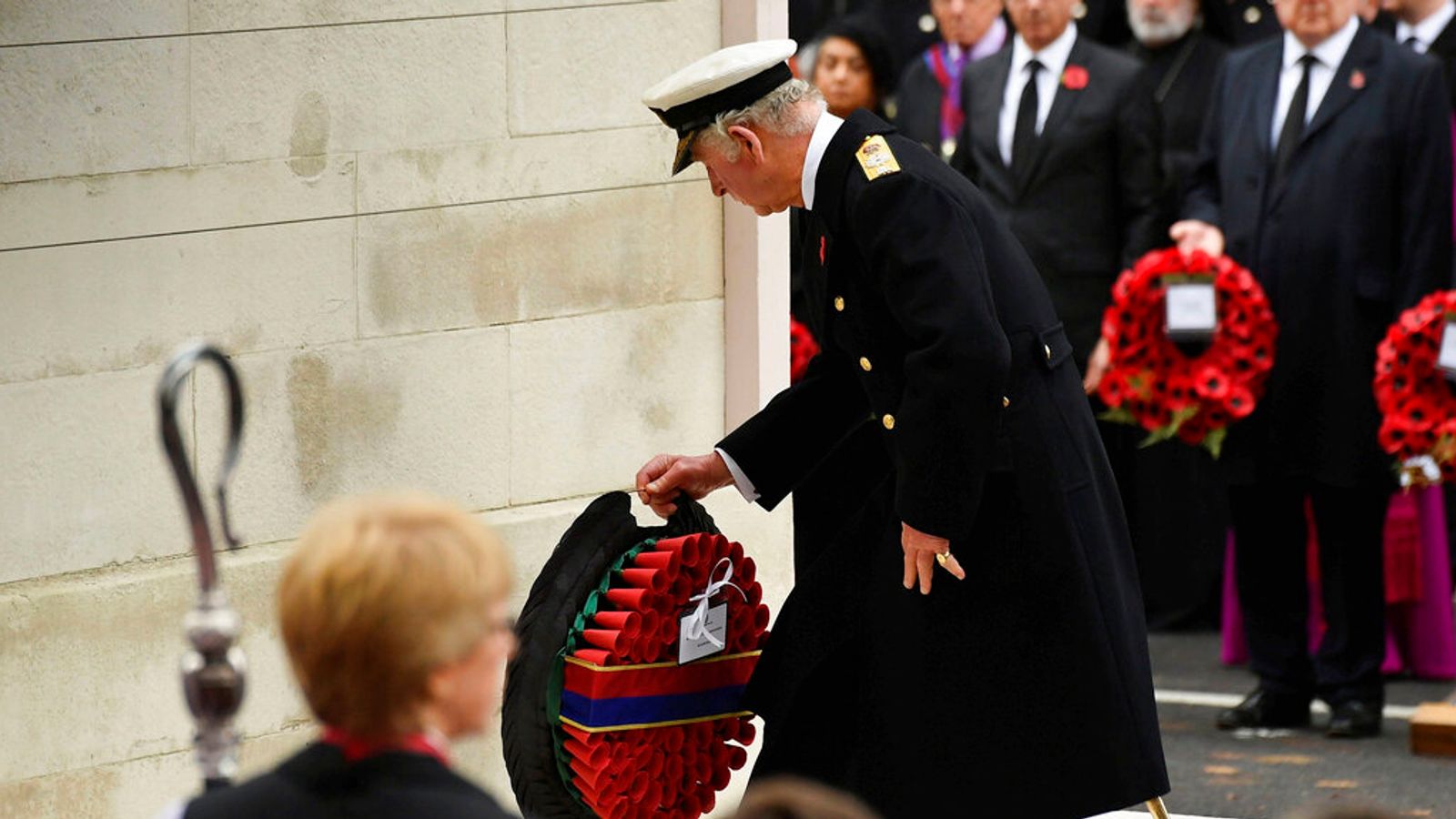 The nation will fall silent today as the King for the first time as monarch leads a moving Remembrance Day service.

King Charles will lay a new poppy wreath incorporating a ribbon of his racing colours, with the design paying tribute to the ones used by both his late mother and his grandfather George VI.

A wreath will also be laid on the Queen Consort’s behalf for the first time as Camilla watches from a balcony.

Queen Elizabeth II, who died nine weeks ago, considered Remembrance Sunday one of the most significant and important engagements in the royal calendar.

It was 50 years ago the then Prince of Wales placed his first wreath at the cenotaph, during the following decades he has always been one step behind his mother developing the deepest appreciation of what his new responsibility to the military means.

“He understands the history and the multitude of connections between the sovereign, the Royal Family and the armed forces far better, I think, than any member of his staff… I think it’s an intrinsic part of his role as King and he understands that there is an indelible link to the armed forces,” Alastair Graham, his former equerry, said.

Mr Graham, who served in the navy for more than 25 years, supported the prince between 2002 and 2004, helping to organise his diary and providing that direct contact with the forces.

During that period, Britain was caught up in the Iraq War, allowing him to see first-hand the now King’s dedication to the military.

Mr Graham told me: “As it had kicked off, the programme [diary] effectively went out the window, and we were tasked to rearrange the programme to make sure that His Majesty could give as much time as possible to the regiments, families that were left behind while they were serving, and maintain very close links through the chiefs of staff to understand what was going on and how the war was progressing in his normal role at that time as Prince of Wales, but clearly one that he would continue as King.”

Those who know him well say his understanding of military life developed early, not just because of the family connections but through his own training with all parts of the armed forces, making him, some would say, the most military-trained King we’ve ever had.

Since 2017, another duty has been placed on him as the Queen decided it was no longer practical for her to place her own wreath.

It was deeply symbolic that the Queen during her lifetime passed the responsibility to her son – it was a transition happening before our eyes in a way we hadn’t seen before.

It also means on Sunday that while it will be his first time as King, the fact we’ve seen him do it before means it won’t be a complete distraction from those the Royal Family are most keen we all remember.

This year, almost 10,000 veterans will join the Royal British Legion march past, with 400 Falklands veterans forming the largest contingent watched by an estimated crowd of 10,000 people on Whitehall.

Andrew Lawless whose chinook helicopter crashed during the Falklands conflict 40 years ago will be there for the first time remembering his comrades and says the King’s presence will be appreciated just as much as his mother’s was for so many years.

“He said himself he wants to follow in his mother’s footsteps so his sense of duty and service is definitely there and we know it”, Mr Lawless said, adding, “there is a solemn part to it as well and certainly when I’m marching past the cenotaph there will be names going through my head of friends who can’t be here”.

This weekend, Queen Elizabeth has also been remembered at the field of remembrance at Westminster Abbey, and will also still be a focus at the Cenotaph, as her son, the King, now leads the family and the nation as we all pay tribute to others who’ve served.

Prime Minister Rishi Sunak said: “This year more than ever, we are reminded of the huge debt of gratitude we owe those who lay down their lives to protect their country.

“As we fall silent together on Remembrance Sunday, we will honour the memories of the men and women we have lost and pay tribute to the brave soldiers of Ukraine as they continue their fight for freedom.”

Defence Secretary Ben Wallace said it was a time “to reflect upon the sacrifices made by our veterans and service personnel on operations around the world”.

“We must never forget those who gave their lives in defence of our values and our great nation,” he said.

“All of us will also be thinking of those brave Ukrainians who are fighting for their very own survival to defend freedom and democracy for all, just as the UK and Commonwealth soldiers did in both world wars.

“Today, members of the UK armed forces at the Cenotaph and around the world will come together to honour all those who came before them.”