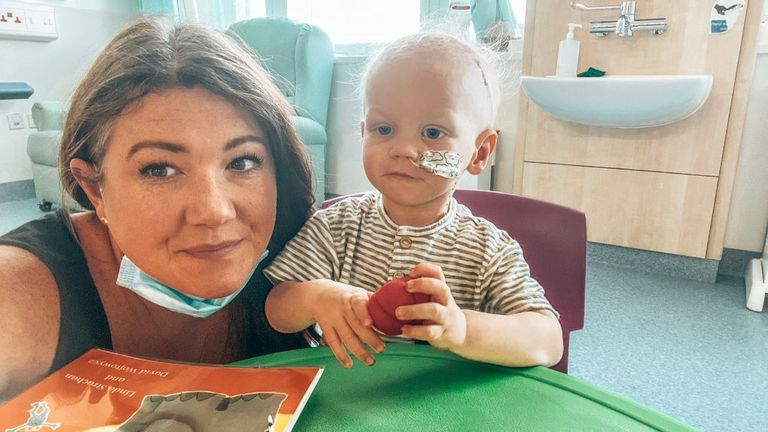 When Emma’s three-year-old son was diagnosed with a brain tumour, money was the last thing on her mind.

With the tumour wrapped around his optic nerve – meaning it can never be removed – the kind and sociable toddler will need treatment on and off for the next 18 years of his life.

“The bottom just fell out of our world, we thought we were never going to be happy again,” she told Sky News.

After 18 months of gruelling chemotherapy, the family now face the stark reality of coping with Seb’s cancer amid a rising cost of living and an ever-diminishing household income.

“Initially you think the diagnosis is horrendous emotionally but then it hits you, financially how do we make this work?” Emma Grimwood-Bird said.

The cost of cancer in children

Seb is fed using a feeding tube but is allergic to the hospital’s feed solution, so the family have to buy him high-calorie food that is easily blendable.

“For the first time, I am having to take things out of the basket and accommodate the rest of us around his nutritional needs.

“Which we are happy to do but it’s not something we have ever had to do before.”

‘How are we going to manage?’

The family also face a £300-a-month increase on their mortgage come January, as well as an electricity bill that has almost doubled, rising from £120 to £217.

“We know our mortgage is going up, but when we get to January we are not sure how it’s going to play out. I think we’re just putting our heads in the sand and saying, ‘We’ll manage, we’ll manage’.

“But now it’s getting to the point where we are thinking, how are we going to manage?”

While Seb is stable at the moment, she said the “fear is always there” that he may get sicker, and either she or her husband will have to leave their job to care for him.

Emma has already used up her allotted sick pay, meaning any additional time off is unpaid.

“I thought there would be some sort of support if you can no longer work if your child is sick. But there is no protection at all.

“We have really tried to keep our employers on side, but there is only so far they will go. “

They get £300-a-month disability living allowance, which just about covers the cost of the additional car they need to take Seb to his appointments – at a hospital an hour away.

“I never have I thought about I would be someone that would receive benefits ever,” she said.

“But we didn’t ask that for our son to get a brain tumour and as much as you are dealing with the emotional side of it, you have to have the financial conversations as well.”

Rachel Kirby-Rider, chief executive of Young Lives vs Cancer, said: “We are witnessing the worst cost of living crisis we have seen in recent memory, and the young cancer patients and families we support are having to deal with the uncontrollable costs of cancer alongside the fear a cancer diagnosis brings.

“They are left having to make impossible choices, deciding between putting the heating on to keep their child warm or paying for petrol to get to hospital for treatment; getting the food their child desperately craves while on chemotherapy or buying a warm coat.”

The charity has introduced a crisis fund, offering grants to families and young people in greatest need this winter, alongside offering emotional support.

For Katherine Lichten, from Suffolk, it’s a familiar story.

Their “whole world was turned upside down” when three-year-old Teddy, feared initially to need surgery for appendicitis, was found to have a cancerous mass which had metastasised on his hips, spine and bone marrow.

Teddy’s cancer is rare – there are less than 100 cases a year in the UK and only 40% of those diagnosed survive five years.

The train-obsessed little boy – whose favourite thing to do is go to the local station and spot the engines – has now been isolated from his friends due to infection concerns.

Katherine said: “He’s very curious, he likes to know what’s going on, and he likes to ask the nurses what medication it is – you can’t get anything by him.”

Unable to return to work

Katherine was due to return to work in January at the end of her maternity leave for Teddy’s eight-month-old brother Rupert.

But because of Teddy’s cancer, she won’t be able to go back until this time next year.

As their income goes down, their costs have gone up – including their mortgage, which is now up £200 a month.

“Our budget for food has stayed the same but every week we are getting less and less for our money,” she said.

“It’s very difficult to do food shopping when you have got a child who is seriously ill.”

Teddy also requires multiple hospital visits, which costs the family £12 a day on public transport, or £30 per journey if they need to take a more urgent taxi.

The family is fundraising for medical treatment abroad, hoping to get him specialised treatment in the US.

But the weakening of the pound against the dollar means they need to raise even more to be successful.

The lack of support for parents of children with cancer is what spurred Ceri Menai-Davis to set up his charity, It’s Never You.

His six-year-old son, Hugh, died from a rare form of cancer in September last year.

He said parents are forced to rely heavily on charities – including his own, which has an app to provide advice for those “at the coalface”.

Currently, parents can claim universal credit (if they don’t have above a certain amount in savings or a job), disability living allowance, carers allowance and 18 weeks unpaid leave taken in four-week chunks across the year.

“You are constantly fighting against this waterfall,” he said.

“Having been there, I know the cost of everything and what you want to do for your child.

“The three things we have to do to look after our child is to feed them, heat them and take them to hospital. And those three key elements have gone up in price by at least 20%. And for some parents, there is no support, so it’s adding an extra burden to an already awful time.”

Worried about the cost of living? Share your story with Sky News

‘We are worthy people’: Albanians smuggled into UK say they are ‘excited for the future’
First step towards recession as economy contracts in third quarter