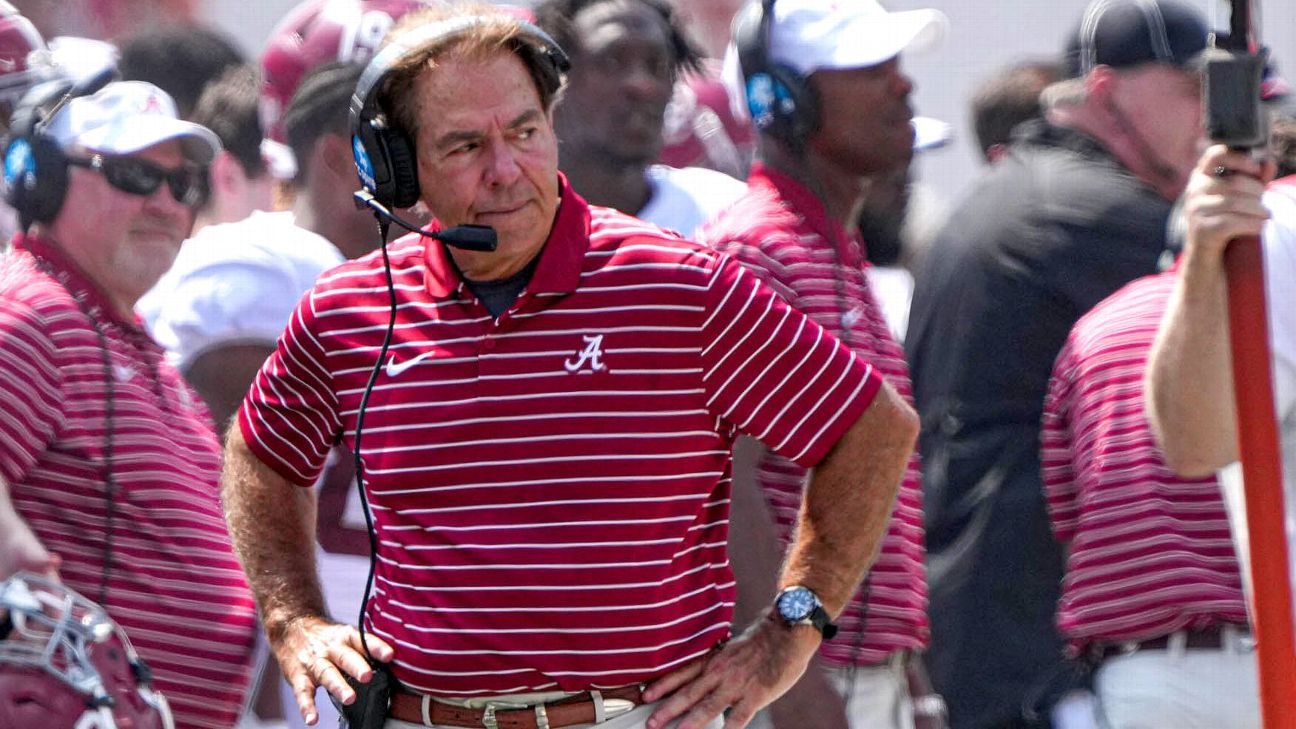 TUSCALOOSA, Ala. — Nick Saban is frustrated that his football team has lost two games by four points total, with both defeats coming on the last play of the game.

For only the second time in the past nine seasons, there figures to be a College Football Playoff without the No. 9 Crimson Tide, who play at No. 11 Ole Miss on Saturday.

“We just haven’t played very well on the road, and we’ve had all the toughest games on the road, including this one this week,” Saban told ESPN on Thursday. “So, it is what it is.”

What has frustrated Saban most is that through nine games this season, his team doesn’t seem to be getting his message to trust the process, not worry about results and pay attention to details. The Crimson Tide had 15 penalties in a 20-19 win at Texas on Sept. 10 and four turnovers in a 24-20 victory against Texas A&M at home. Alabama was penalized 17 times against the Volunteers and had nine more in the defeat at LSU.

“We simulated in practice, we don’t seem to have much problem in practice,” Saban said. “I’ve tried to always focus on process and not outcomes, that’s always been the culture of the program. I don’t know if it’s the expectations that get created or what, but this team seems to be a little more outcome-oriented, which sometimes to me makes it more difficult to focus on the process. And then when you do that, it also creates anxiety while you’re playing. We don’t seem to have it at home, but we seem to have it on the road for whatever reasons. But we still start out the games halfway decent, but just don’t seem to sustain it.”

The Crimson Tide are tied for 124th among 131 FBS teams in penalties (74.6 yards per game) and tied for 101st in turnover margin (with six turnovers gained and 11 lost).

“It’s never been an issue,” Saban said. “We’re always plus in [turnover margin] and don’t turn the ball over. We get turnovers on defense. We’ve always been in the plus category, and then we do a thing that shows what the cost of a turnover is. We take all the turnovers for the season and say, ‘What was the result of that?’ It’s like turnovers gained are four or five points. Turnovers lost, you give up three or four points.

The Crimson Tide rank second in the SEC in both scoring offense (41.8 points) and scoring defense (18.3).

“I’m not blaming anybody else in the organization,” said Saban, whose teams have won six national championships and played for three others since 2009. “It’s my responsibility. I know what plays they call; I’m involved in how they prepare for the week. I watch practice film with them. But I think people look for somebody to hate when things don’t go right. But most of the stuff comes down to a lack of execution. It’s not really what you’re doing, it’s how did you do it?”

One thing that has changed, Saban said, is coaches’ relationships with players. NIL and the transfer portal have changed that dynamic for many veteran coaches.

“We used to always have to deal with guys going out for the draft, but now you’ve got everybody on the team can go out for the draft basically [through the transfer portal]. When you ask about commitment, that in and of itself, just the dynamic [has changed]. I’m not talking about our team. I’m just talking about the dynamic of the whole thing. You’ve really got to have guys that are all in for the team, and we started out the season that way.”

With three games left in the regular season, Alabama doesn’t have much time to figure it out. Only one Crimson Tide team lost more than two games in a season after Saban’s first season in 2007; the 2010 squad went 10-3.

“We lost three games in the regular season,” Saban said. “Everybody was like, ‘We’re done.’ I don’t pay any attention to it. I just keep my nose to the grindstone. With fans, when you play, you’re only as good as your last game. You’re only as good as your last play, so it’s the nature of sports. I put more pressure on myself to try to do it and get it right, and I’m not on social media. I don’t know what people say, and I don’t really care. But I think the way I evaluate how we do what we do is more significant to me than what everybody else thinks.”

Saban, 71, knows that if the Crimson Tide make the same mistakes against Ole Miss on Saturday, the Rebels might be the third team whose fan base rushes the field against them.

“I tell these guys we’re always going to get the other team’s best game,” Saban said. “And they don’t storm the field every time they beat somebody. They storm the field when they beat us. Just to give you an idea of the emotion for the crowd, the team and everybody else in terms of how they’re going to play against us, and you have to respect that. You’ve got to respect what it takes to win. You’ve got to respect the preparation, the attention to detail, the discipline that it takes to play in these kinds of games.”