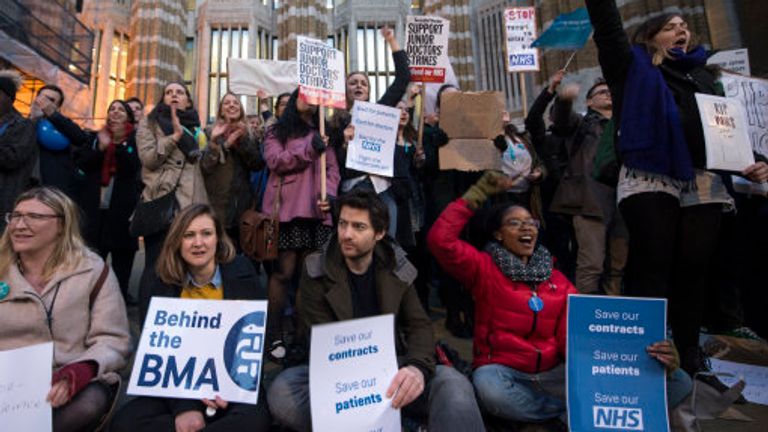 Jeremy Hunt has said he has a “great deal of sympathy” for nurses struggling with the cost of living – but the best way to help them is to bring inflation down.

The chancellor was asked whether he was concerned it will be a “winter of discontent” as nurses call for a 17% wage increase and have voted to strike, likely next month, for the first time ever.

But Mr Hunt, who was the health secretary when junior doctors went on strike for the first time ever in 2015, implied the action would have no effect on nurses’ pay and everyone is dealing with the same issues.

“It’s an area that I know well, and I have a great deal of sympathy for them,” he said.

“And the reason that they are feeling so frustrated is because inflation is more than 10% and that is eating away at everyone’s earnings and making everyone worry about the cost of the weekly shop.

“The best thing that I can do as chancellor is produce a plan that brings down inflation, brings down the upward pressure on interest rates.”

He admitted nurses, like the rest of the country, will have to pay more for their mortgages and said that is why a plan is needed.

“It’s not going to be easy. There are going to be some very difficult choices,” he added.

“I’ve used the word eyewatering before and that’s the truth, but we’re going to make those choices to give nurses public sector workers, actually all families and businesses who are worrying at the moment that certainty that there’s a plan in place.”

A spokeswoman for the Royal College of Nursing, whose members voted to strike, said: “Nurses have had buckets of sympathy for years; it’s action they need to see.

“There is a crisis in the NHS and warm words on their own leave ever more patients at risk. The government needs to stop dancing around the issue and accept the reality.”

Read more: Will nurses at your hospital go on strike? Check which trusts are affected

On Thursday, Prime Minister Rishi Sunak said of nurses’ call for a 17% pay rise: “I think most people will recognise that clearly, that’s not affordable.”

There have been reports of nurses sleeping in their cars to avoid high fuel costs and relying on food banks as living costs spiral.

Junior doctors – any doctor below consultant level – will ballot for industrial action in early January after the government refused to restore their pay to 2008/9 levels.

The British Medical Association (BMA) union said they have experienced real-term pay cuts of more than a quarter of their salaries since then, with only a 2% pay increase this year as opposed to the 4.5% given to other NHS workers.

Mr Hunt’s comments on Friday came moments before data analysis supplied by Labour showed some NHS trusts have paid as much as £2,500 for a single agency nurse for a shift.

There are currently nearly 47,000 nursing vacancies in the NHS and BBC figures showed spending on all agency staff rose 20% last year, reaching £3bn in England.

Some specialist consultants have reported being offered £130 an hour, which is well above the cap.

Agency pay rates are capped at 55% above what a normal employee would receive.

But for nearly nine in 10 agency shifts for doctors and dentists, and four in 10 for nurses, the caps were exceeded last year.

Hospital bosses can exceed the cap if there is a significant risk to patient safety due to a lack of staff.

Taxpayers picking up the bill

NHS leaders, charities and think tanks have repeatedly called on the government to publish a workforce plan to increase the number of permanent staff and reduce costs.

Shadow Health Secretary Wes Streeting called the large increase in spending on agency staff an “infuriating” use of money.

“Taxpayers are picking up the bill for the Conservatives’ failure to train enough doctors and nurses,” he said.

A spokesman for the Department of Health and Social Care said there is a “clear policy” to reduce agency spend through hourly pay capping and ensuring they are only hired through approved NHS agreements.

“These measures have seen agency spend fall by a third overall between 2016 and 2021,” he said.

“We have also commissioned the NHS to develop a long-term workforce plan to help recruit and support NHS staff and we have given over one million NHS workers a pay rise of at least £1,400 this year.”