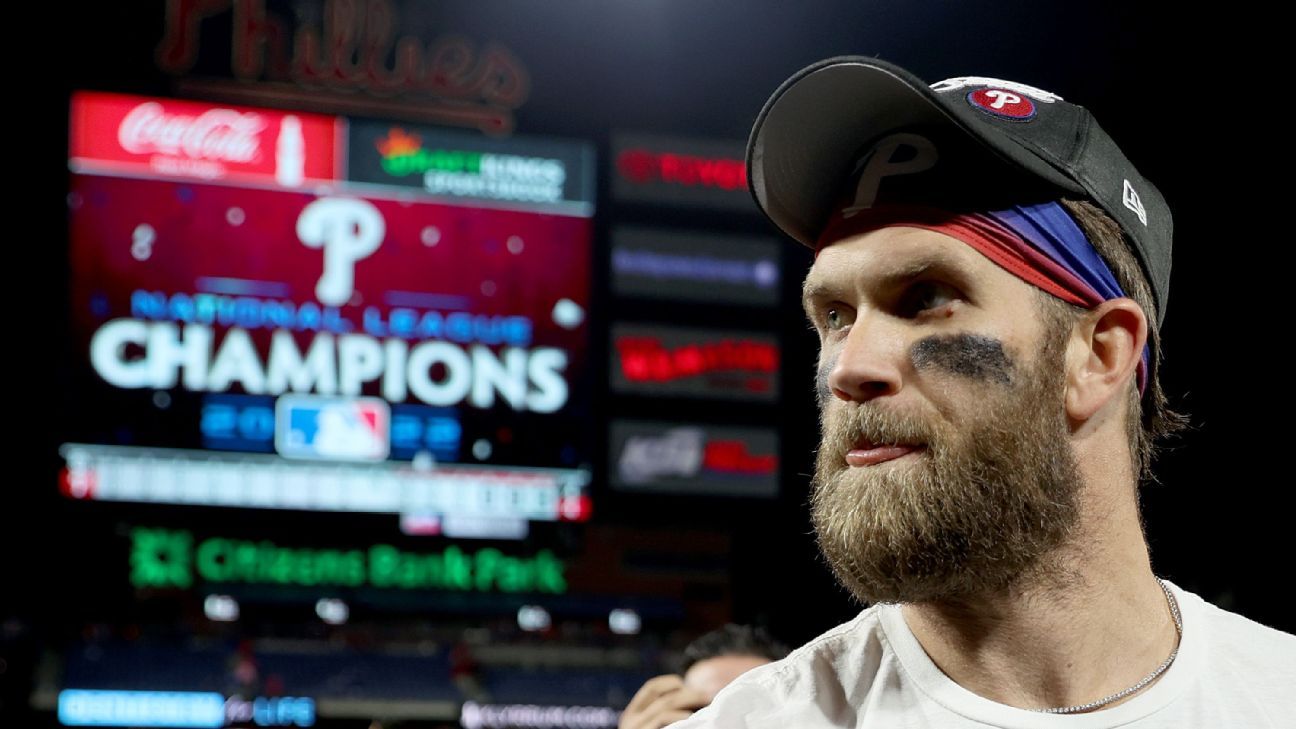 Seventy minutes after hitting the most important home run of his life Sunday, a two-run blast that won the Philadelphia Phillies the National League Championship Series, Bryce Harper was at the center of the clubhouse, surrounded by his teammates as beer and champagne soaked anyone within spraying range.

Harper’s place in the middle of the celebration was only fitting, as was the fact that he manufactured the moment that sent his Phillies to the World Series. He has been the face of the franchise since the 2019 day he committed to the city for 13 years after owner John Middleton wrote a $330 million check to bring him to Philadelphia.

Despite plenty of moments when he might have doubted he made the right choice in leaving Washington for Philadelphia as a free agent, Harper has always embraced his new home. Even when his old team, the Washington Nationals, won the World Series in 2019. Even when Philadelphia changed GMs and managers more than once during a turbulent first four years with the franchise — including when Rob Thomson took over for Joe Girardi after a 22-29 start this season.

“I don’t like looking back,” Harper said after the game, with his MVP trophy sitting next to him. “I like looking forward and moving forward. This game is ‘what have you done for me lately?'”

He never lost faith, always believing what Middleton had promised him: The organization would always put winning above all else.

Not long after the Sunday home run, owner and star met on the field amid celebratory chaos. Their hug lasted longer than the flight of the ball — which left the playing field at 108.9 mph. Middleton was asked if the embrace meant something extra special.

“You bet it did,” he said. “$330 million later, and mutual promises of being committed to winning and doing whatever it took to win. He did that.”

The home run that sent Philadelphia back to the World Series for the first time since 2009 justified the Phillies’ spending on Harper, as well as the free agent deals this spring that brought in Kyle Schwarber and Nick Castellanos — both of whom had front-row views of Harper’s blast; Schwarber from the dugout, and Castellanos from the on-deck circle. “It looked like I was having an exorcism on the dugout rail,” Schwarber said in a beer-soaked locker room. “Man, he’s nasty.”

For Schwarber, winning has never been an issue. He has done it everywhere he’s been his entire career. Praised as the ultimate glue guy in the Phillies clubhouse throughout this postseason, Schwarber has appeared in six league championship series for three different teams. But he was hurt for the only pennant-clinching win of his career, when the Chicago Cubs won it all in 2016. He never got the full playoff experience until now.

“It was cool for me,” he said Sunday between puffs of a cigar. “To be with them the whole year, from day one, has been awesome. Last time [in Chicago] I was down for the whole year.”

This was also a first for the longest-tenured Phillies position player, first baseman Rhys Hoskins. Hoskins had four home runs in five games this series and might have been named MVP if not for Harper’s heroics — but couldn’t bring himself to care about that while he celebrated his first pennant win.

“It’s a dream,” Hoskins said, wide-eyed on the field afterward. “This organization is the one that believed in me and gave me an opportunity to impact the city of Philadelphia in any way I could.”

Harper’s arrival signaled to Hoskins that the organization was serious about winning after years of frustration. Until this season, Hoskins had never played in a postseason game, instead having to hear stories of glory about teams from the past. Every time he looked up at the video scoreboard during this series, there was another Phillies great looking down from the stands: Ryan Howard, Jayson Werth and Shane Victorino — all members of the team’s 2008 World Series-winning squad.

The dream of joining those former players as champions became realistic once Harper arrived. Hoskins wasn’t surprised that it was Harper who delivered the big play that finally got him there.

We’ve got you covered this October with the latest schedules, results, news and analysis.

“It’s probably something that he’s had in his head since the time he picked up a bat,” Hoskins said. “It’s been a while. He changed cities and had to get used to a new organization. For him to come through in that moment is storybook stuff.”

Later, in a hallway underneath the stands behind home plate, Harper shared a moment with actor Miles Teller, a huge Phillies fan, while still clutching his MVP trophy. He sat in the media room and said all the right things: The team isn’t satisfied with just winning the pennant and has four more games to win from here. But Harper looked most comfortable back in the clubhouse, allowing beer to be poured on him while sharing a victory that ended the series — instead of packing up to head across the country for Game 6.

The Phillies are headed to the World Series because of Harper. This is his team and now his city — and it was his heroics that allowed his home fans to celebrate the win in their ballpark.

Inside the six-day mad dash to make Tennessee’s field playable after an epic party
SEC with 7 in Top 25 as LSU, S. Carolina enter