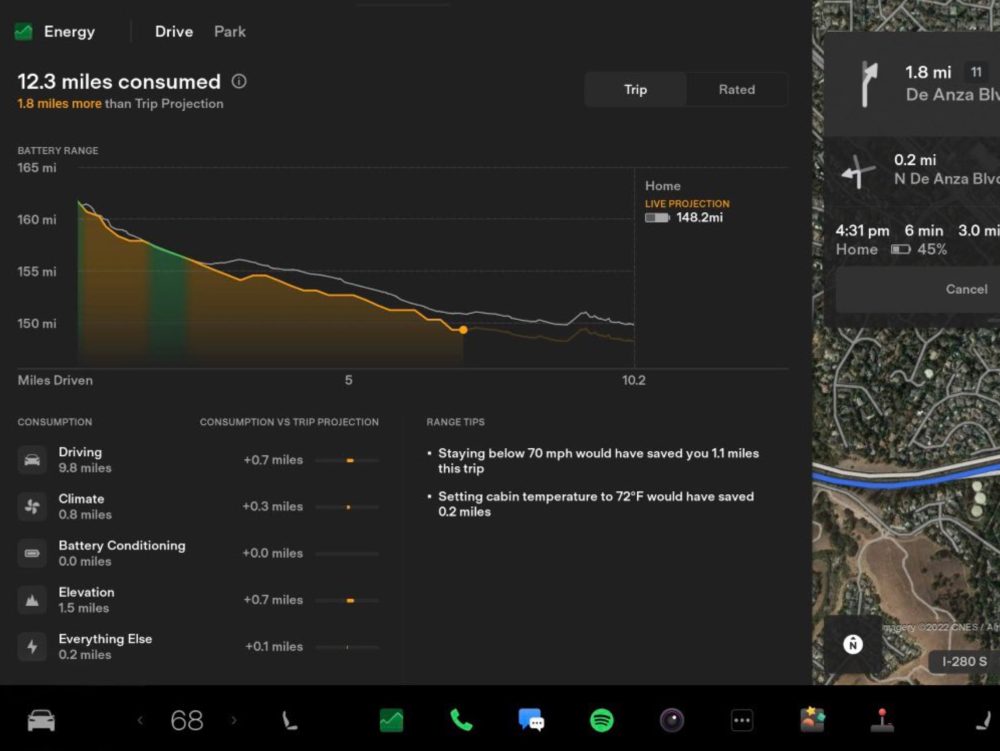 Tesla has updated its in-car energy app to give a comparison between real energy use and the projected range, and it even gives you range advice to get closer to the optimal range.

Range calculations are difficult regardless of the type of powertrain – electric or internal combustion engine.

There are just so many factors that can affect the efficiency of a vehicle on a road that it is hard to determine how far it can go on a full battery pack or tank of gas.

But it is important. I’d even argue that accurate range prediction is better at curbing range anxiety than longer range.

Tesla has been a leader in efficiency and long-range electric vehicles for a long time, but despite that, it still has issues predicting the energy consumption of a trip.

When entering a destination in the navigation system, Tesla gives the driver the expected range remaining at the destination, but Tesla drivers know that most of the time it’s actually going to be much lower than the estimate.

In 2018, Tesla added more environmental factors (elevation changes, weather, etc.) in the calculation. It helped, but it is still far from accurate. You put a destination in the system and Tesla’s trip advisor tells you how much energy you will have left by the time you get there, but it’s not rare to see the amount of energy go down fast as you drive.

Again in July, Tesla released a new update that went even further by adding several other factors in its range calculations, including tire pressure and even phone charging.

These changes are now leading to a more in-depth in-car energy app for Tesla vehicles:

As you can see, the new app gives a more detailed description on how and when you are deviating from the projected range:

It even gives you “range tips” to get closer to your optimal range projection. The examples above are the most obvious ones, which are generally “slow down” and “keep climate control down.”

This added information on where your car’s energy is going other than propulsion can help you make better decisions to optimize for range instead of comfort when needed.

New Zealand plans to tax emissions from livestock burps and dung
Leak detected on another Russian pipeline connecting to Europe, but Poland says it looks accidental