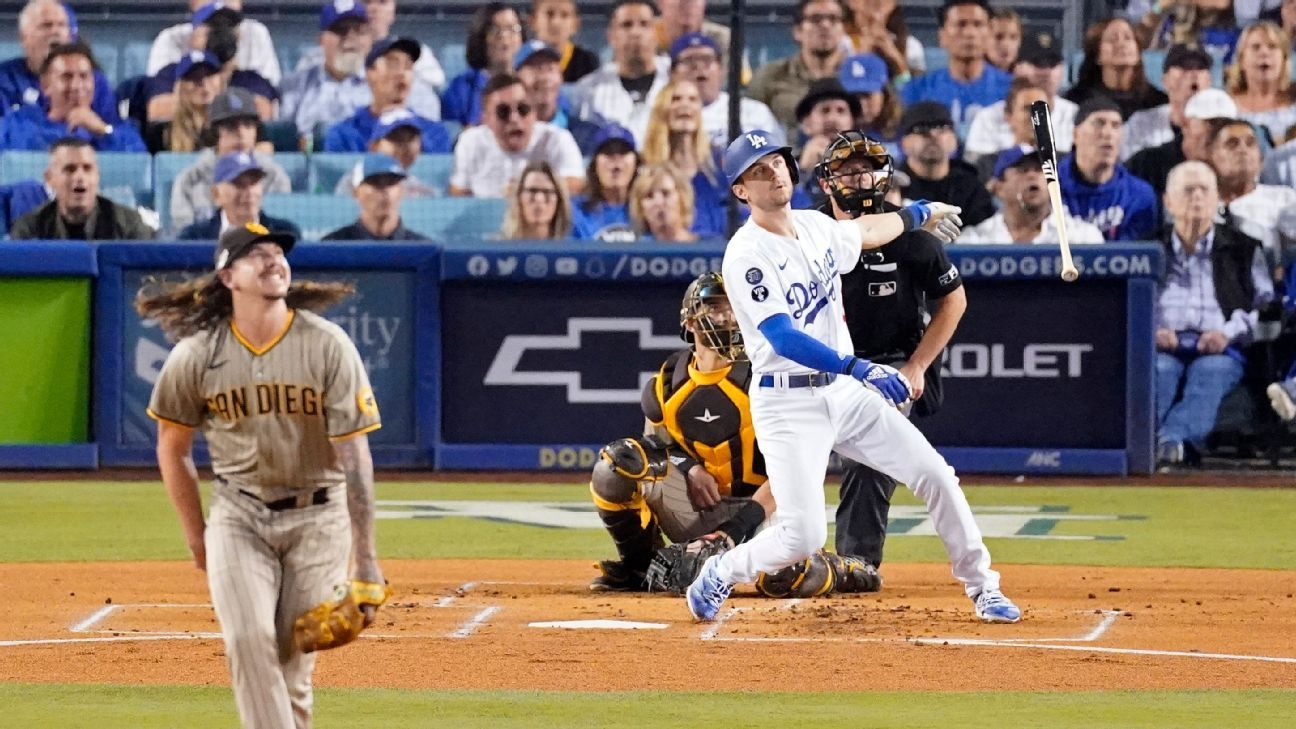 We’re down to eight teams in the 2022 postseason after four were eliminated this past weekend in MLB’s first-ever wild-card series weekend. Now it’s on to the league division series: four series, best-of-five, first team to win three advances.

The Philadelphia Phillies beat the defending champion Atlanta Braves in the first game of the division series round on Tuesday. In a battle between AL West rivals, the Houston Astros defeated the Seattle Mariners on a dramatic walk-off. The New York Yankees beat the Cleveland Guardians in Game 1 of the second ALDS, and, finally, an intradivision showdown resulted in the the Los Angeles Dodgers beating the San Diego Padres in the second NLDS opening matchup.

Here’s a look back at all the Day 1 action.

More: Everything you need to know about the 2022 MLB playoffs | Previewing LDS matchups | Could this be the greatest postseason … ever? | Bracket, results and more

The Dodgers have continually talked up the depth and talent of their bullpen, regardless of the uncertainty at the back end — and that confidence was validated in their postseason opener. The Padres trimmed a five-run deficit to two with a big fifth inning against Julio Urias, but then four Dodgers relievers — Evan Phillips, Alex Vesia, Brusdar Graterol and Chris Martin — kept the Padres scoreless over the last four innings for a Game 1 victory.

The usage offered an early peek at the Dodgers’ bullpen strategy. Manager Dave Roberts used Phillips, their most effective reliever this season, in the sixth inning because the best part of the Padres’ lineup was due up. Vesia, a lefty, came back out to face the left-handed-hitting Juan Soto. And for the final four outs, it was Graterol and Martin. The order will undoubtedly change throughout the postseason, with Tommy Kahnle and, perhaps eventually, Blake Treinen pitching in high leverage situations. But the Dodgers clearly feel good enough about their depth. — Alden Gonzalez

Out of a jam

With the Padres on a roll in the sixth inning, Phillips got Wil Myers to ground into a double play, ending the threat.

Padres on the board

Myers’ 376-foot home run just made it over the wall to give the Padres their first run of the night. Runs by Jake Cronenworth and Ha-Seong Kim cut the Dodgers’ lead to two.

In the bottom of the third, Will Smith hit a ball deep into left field for a double that brought home Trea Turner home and extended the Dodgers’ lead to three. After a Max Muncy single, L.A. added another run courtesy of a Gavin Lux double that brought Smith home.

A walk with the bases loaded along and a Padres error helped bring in two more runs and increased the lead to 5-0 for Los Angeles.

Puttin’ up a three-spot. pic.twitter.com/7L9I5UI9Be

Trea Turner gave the Dodgers an early lead in the first inning with a 419-foot blast to left field.

The Yankees needed Gerrit Cole to be on top of his game and he delivered. Over the course of 6 1/3 innings, Cole allowed just one run on four hits — a home run to Steven Kwan — while walking one and striking out eight. The game nearly fell apart on Cole in the third inning after Cleveland loaded the bases with one out following Kwan’s home run, but Cole managed to get out of the inning unscathed.

Meanwhile, at the plate, the Yankees relied on a solo homer from Harrison Bader to tie the game, a Jose Trevino sacrifice fly to take the lead and an Anthony Rizzo two-run shot into the second deck of right field to extend the lead to 4-1. That provided a cushion for the bullpen, which was held together on the backs of Jonathan Loaisiga, Wandy Peralta and Clay Holmes. — Joon Lee

It wouldn’t be a game at Yankee Stadium without a lot of home runs. Speaking of that, Anthony Rizzo hit a two-run dinger to add to New York’s lead.

H-R to the izzo. pic.twitter.com/q5zkwN2Bpw

The home run that wasn’t

Josh Donaldson thought he had a go-ahead home run … and was caught out between first and second base when it turned out that the ball had instead bounced off the top of the wall. Replay confirmed it, and the Yankee faithful were less than enthused. Fortunately for the Bronx Bombers, an Oscar Gonzalez misplay off the right-field wall led to a sacrifice fly, and a tenuous lead.

Josh Donaldson was THIS close to hitting a go-ahead HR for the @Yankees 👀 pic.twitter.com/sAtsHkwGdZ

The Yankees strike back

Harrison Bader tied things up for New York with a home run to left field. It’s Bader’s first home run as a member of the Yankees.

Not a bad time for your 1st blast in pinstripes. @aybaybader 🔥 pic.twitter.com/cFFujDrIXN

Cleveland starts it off

The Guardians’ power-filled postseason continues with Steven Kwan opening up the scoring with a 360-foot home run to right field.

Hey @NYCMayor let’s make a deal. I’m willing to bet a freshly tapped 6 pack of @GLBC_Cleveland Christmas Ale as we prepare to beat the @Yankees. What do you say? #GoGuardians #ForTheLand

The Mariners were on their way to stealing home-field advantage in their ALDS, and then the Astros did what the Astros always seem to do in October. Bottom nine. Two on. Two out. Yordan Alvarez at the plate. And in came Robbie Ray, the reigning AL Cy Young winner, the $115 million free agent prize of Seattle’s offseason, to get the lefty-on-lefty matchup. Alvarez fouled off a fastball. He didn’t miss the next one. And 439 feet later, a 117-mph rocket landed in the right-field bleachers and propelled the Astros to an 8-7 victory in Game 1. Down 7-3 after Justin Verlander‘s worst-ever playoff start, Houston looked done until it wasn’t. And it continued a trend that has proven awfully fruitful in years past: Six straight postseasons, six straight victories in Game 1 of the ALDS. — Jeff Passan

The Astros used the most brutal weapon possible in trolling the Mariners: math.

HOU love to SEA it. pic.twitter.com/ndPKtAb2BH

Astros walk it off

Alex Bregman‘s 403-foot homer drove Alvarez home and narrowed Seattle’s lead to 7-5 in the bottom of the eighth inning.

Seattle added to its lead thanks to Eugenio Suarez‘s solo homer.

Eugenio Suárez drops one into the Crawford Boxes! #Postseason pic.twitter.com/QTiGb7MA59

Houston gets on the board

Reminder to hikers and Houston baseball players that trash cans should only be used for their intended purpose. pic.twitter.com/2GkmgVkV7J

Thanks for the help

Admin is giving y’all today and Thursday off 🤝 pic.twitter.com/013Fn1dle7

The Phillies’ offense has emerged during the playoffs with a different feel than the long ball-or-bust version we saw most of the season. In Tuesday’s NLDS Game 1 win, they peppered Braves pitching with 10 hits — Nick Castellanos had three of them — and seven runs in the first five innings without hitting a home run.

When they weren’t filling the bases via singles and doubles, Philadelphia played small ball, attempting three sacrifice bunts, including one each from sluggers Bryce Harper and Kyle Schwarber. Two of those bunt attempts were successful, leading to two more small-ball moments: sacrifice flies by Alec Bohm in the third inning and Matt Vierling in the fifth. And it all added up to just enough for the Phillies to hang on for a 7-6 victory after the Braves made it interesting with a three-run ninth inning.

It’s not something you can find in the box score, but the Phillies’ fast start — coupled with the Mariners getting to Astros ace Justin Verlander early in their own division series opener — makes it worth wondering if there’s a rest-vs.-rust advantage to coming in hot off a wild-card-round win against a team that hasn’t played for nearly a week. — Jesse Rogers

Nick Castellanos makes a diving catch for the second out of the ninth inning en route to a Philly victory.

Also NICK CASTELLANOS ARE YOU KIDDING WITH THIS CATCH pic.twitter.com/MLpgZnDLel

Matt Olson hits a three-run blast with one out in the ninth, cutting the Phillies’ deficit to just one run — and giving the Braves some late-game hope.

Travis D’Arnaud earned his second and third RBIs of the game with a double that drove home William Contreras and Olson — making him responsible for all of Atlanta’s first three runs.

Philadelphia is living the baseball adage that “two-out hits will get you to heaven.” Atlanta’s first score came via the long ball.

No better way to start the day than wearing matching shirts tbh pic.twitter.com/r7Cct5tCcV