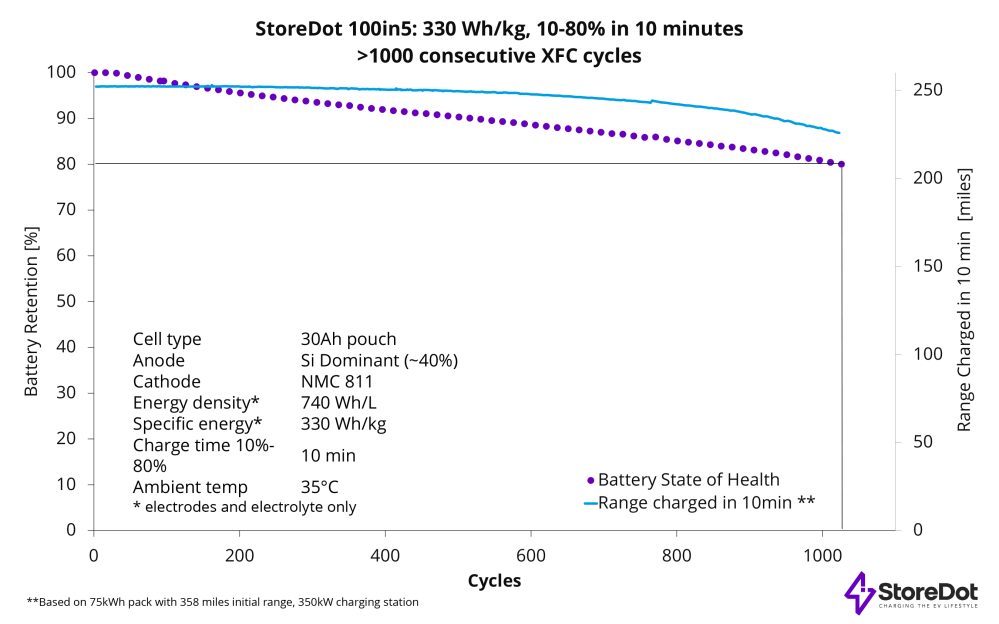 StoreDot says its XFC EV battery cells repeatedly charged from 10-80% capacity in just 10 minutes and then discharged for one hour before recharging. The EV cells achieved over 1,000 of these extreme charging cycles consecutively before degrading below 80% of their original capacity threshold. No noticeable degradation occurred within the first 600 cycles in which the cells were consecutively fast-charged between 10-80%. StoreDot says it expects to achieve further improvements by the end of 2022.

When Electrek asked how many cycles StoreDot is hoping to achieve once the batteries are ready for commercial release, CEO Doron Myersdorf replied by email:

We have already hit our target that we agreed with most OEMs. This allows for a 500,000 km warranty already – assuming each cycle is for 500 km range.

StoreDot is shipping the 300Wh/kg, 700 Wh/l high energy density cells in pouch format to its global automotive OEM partners for testing. The “100in5” EV performance cells allow drivers to consecutively charge 100 miles of range for every five minutes of charging.

In March, the Israeli company shipped its production-ready battery cells to its strategic EV OEM partners and potential customers. It also announced that it had achieved 1,200 cycles for its extreme fast charging cells in prototype format.

StoreDot is currently working on mass production readiness of its “100in5” cells with its manufacturing partner, EVE Energy, in China and says it’s on target to begin mass production of the battery cells in 2024.

All you need to know about the Nord Stream gas leaks — and why Europe suspects ‘gross sabotage’
UAE president to meet Putin in Russia, a week after OPEC+’s deep output cuts