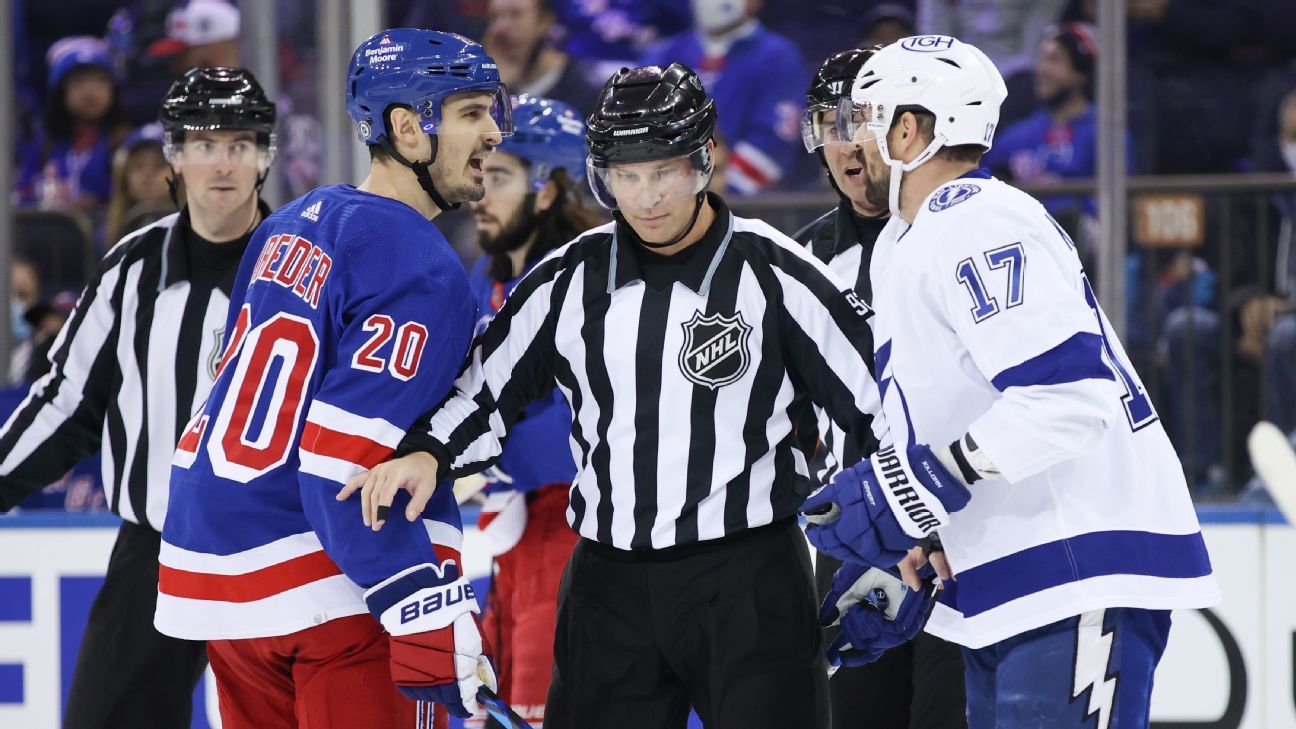 The 2022-23 NHL regular season has finally arrived, with an opening night doubleheader on ESPN and ESPN+.

What impact can a healthy offseason have on Eichel in Year 2? He already put together a terrific preseason performance, registering nine points in three games. Vegas has to hope that’s a sign of things to come. And Eichel, who has never played in a postseason game, should be thinking the same.

Newbie in net: Vegas wasn’t expecting incumbent starting goaltender Robin Lehner to require hip surgery that would sideline him the entire season. But them’s the breaks. The question then became whether veteran Laurent Brossoit or up-and-comer Logan Thompson would be Lehner’s replacement.

Well, Brossoit had hip surgery, too, leaving coach Bruce Cassidy to shuffle between Thompson and Adin Hill. It has been Thompson’s net to lose. The 25-year-old will take what he learned from backing up Lehner last season (when he went 10-5-3 with a .914 save percentage and 2.68 goals-against average) and apply it to the nightly gig. Who knows what might happen when Brossoit is back, but for now the spotlight rests solely on Thompson.

Betting on Bruce: Speaking of newbies, Cassidy is one, too. He came on board in the offseason after being fired by Boston, and is the third coach these Golden Knights have had since their inception in 2017-18. What sort of tricks does Cassidy have up his sleeve to steer Vegas back toward the playoffs? The Golden Knights’ salary cap issues have been well documented, and they lost the likes of Max Pacioretty and Evgenii Dadonov because of them. But there is still a solid well of talent in Vegas’ ranks. It’s on Cassidy to maximize what’s available.

That will be especially challenging on the defensive side for Vegas, where over-30s Alex Pietrangelo and Alec Martinez, plus Shea Theodore (27), highlight the team’s back-end core. Vegas has no time to waste turning things around, putting pressure on Cassidy from Game 1.

Greg Wyshynski takes fans through the chaos of the NHL offseason, which had everything from blockbuster trades to record extensions.

Fiala fever: The Kings had their struggles scoring goals last season, averaging just 2.87 per game through top-heavy contributions from mostly Adrian Kempe (35 goals), Phillip Danault (27), Viktor Arvidsson (20) and Anze Kopitar (19). How does a team improve its depth in that department? Trades, baby.

Los Angeles acquired Kevin Fiala from the Minnesota Wild in June and immediately signed the forward — fresh off a 33-goal season — to a seven-year, $55 million contract. Fiala has been a consistent threat for much of his career and should be a firecracker for the Kings up front. He fit in well during the preseason, and showed sparks of chemistry, especially with Kempe. Fiala will be counted on even more when there’s real points up for grabs.

Growing their games: Los Angeles has been lauded for its prospect depth and fine collection of young talent. Mikey Anderson and Sean Durzi are the latter. Both blueliners project to play important roles for L.A. defensively this season after showing terrific growth and maturation throughout the past year.

Anderson is an effective stay-at-home defender who has been a great complement to Drew Doughty on the Kings’ top pairing. Durzi returned later in the preseason following offseason shoulder surgery, and has earned time between the Kings’ second and third units. He should also fill a sizable slot on L.A.’s power play after excelling there last season. The Kings have long valued a hard-hitting, physical defense, and both Anderson and Durzi can bring that with a side of skill and creativity. And at only 23 years old, these skaters have just begun to show off their full potential.

Keep up with Quick: Jonathan Quick has been counted out before. The 36-year-old goaltender continues proving the doubters wrong. Quick helped carry Los Angeles into the playoffs last season with a 12-3-3 push to the finish. Once there, the veteran gave his club every chance to get past Edmonton in the first round, with a .904 save percentage over seven games.

What more does Quick have in the tank this season? Only a few players remain for Los Angeles from their Cup-winning teams in 2012 and 2014. Quick was an integral part of those runs and has maintained a high level of play since, even while Los Angeles has undergone appreciable turnover. If the Kings intend to challenge for a top-three spot in the Pacific, they’ll need the right goalie to rely on. Quick can quickly show he’s still up for the job.