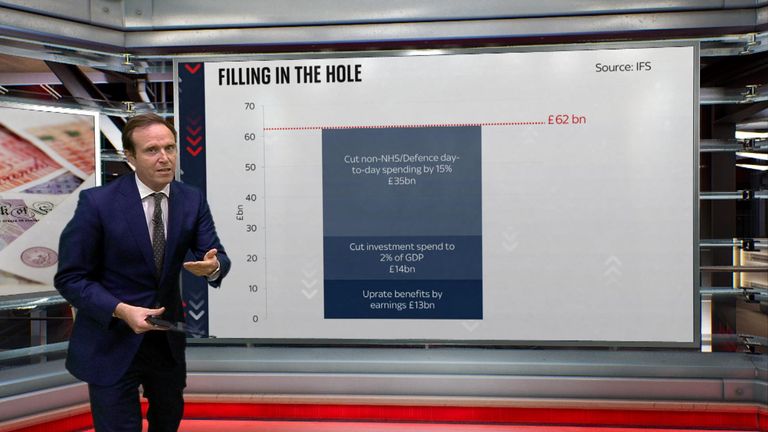 Stephen Hammond is the first Tory MP to effectively call for the measure to be scrapped to balance the books and reassure the markets.

Mr Hammond, a minister in successive Tory governments who has close links to the City, said the corporation tax could be lowered at a later date, but should be allowed to rise now as planned by the last administration.

Under Boris Johnson’s government, corporation tax – the levy on the profits of UK businesses – was due to rise from 19% to 25% in April next year.

But Chancellor Kwasi Kwarteng ruled out the hike during his mini-budget last month, saying keeping the tax lower would help growth in the country.

Speaking exclusively to Sky News, Mr Hammond said: “It is clear that if you look at international tax rates for corporates, keeping it at a level below the 24p level but keeping it above the 19p level would raise money and that would be a sensible way at this stage.”

He said the government needed to prioritise “making sure that the poorest in our society are looked after”, and said the government should limit cuts to education, health and defence rather than spending money preventing corporation tax from rising.

Keeping the 19% figure was one of a number of tax-cutting measures in Mr Kwarteng’s mini-budget, with the Treasury ordering an additional £72bn of borrowing on the financial markets to pay for them all.

The move sent the markets into turmoil, with the pound dropping, mortgage products being withdrawn and the Bank of England having to step in to save some pension funds.

Mr Kwarteng and Liz Truss were forced into a U-turn over the plan to scrap the 45p tax rate for the wealthiest earners, and to bring forward the chancellor’s medium-term economic plan from late November to Halloween.

But now, the Institute for Fiscal Studies (IFS) has warned the chancellor will need to cut spending or raise taxes by £62bn if he is to stabilise or reduce the national debt, as he has promised to do.

How can UK reduce debt?

Mr Hammond praised the support the government was providing to households and businesses to tackle rising energy bills.

But he also appealed to the prime minister, saying he hoped she would “recognise the need to increase benefits with inflation because that is key I think – making sure that the poorest in our society are looked after”.

Instead, he said the “obvious” area where savings could be made was on whether to keep the reduction of corporation tax the chancellor has planned.