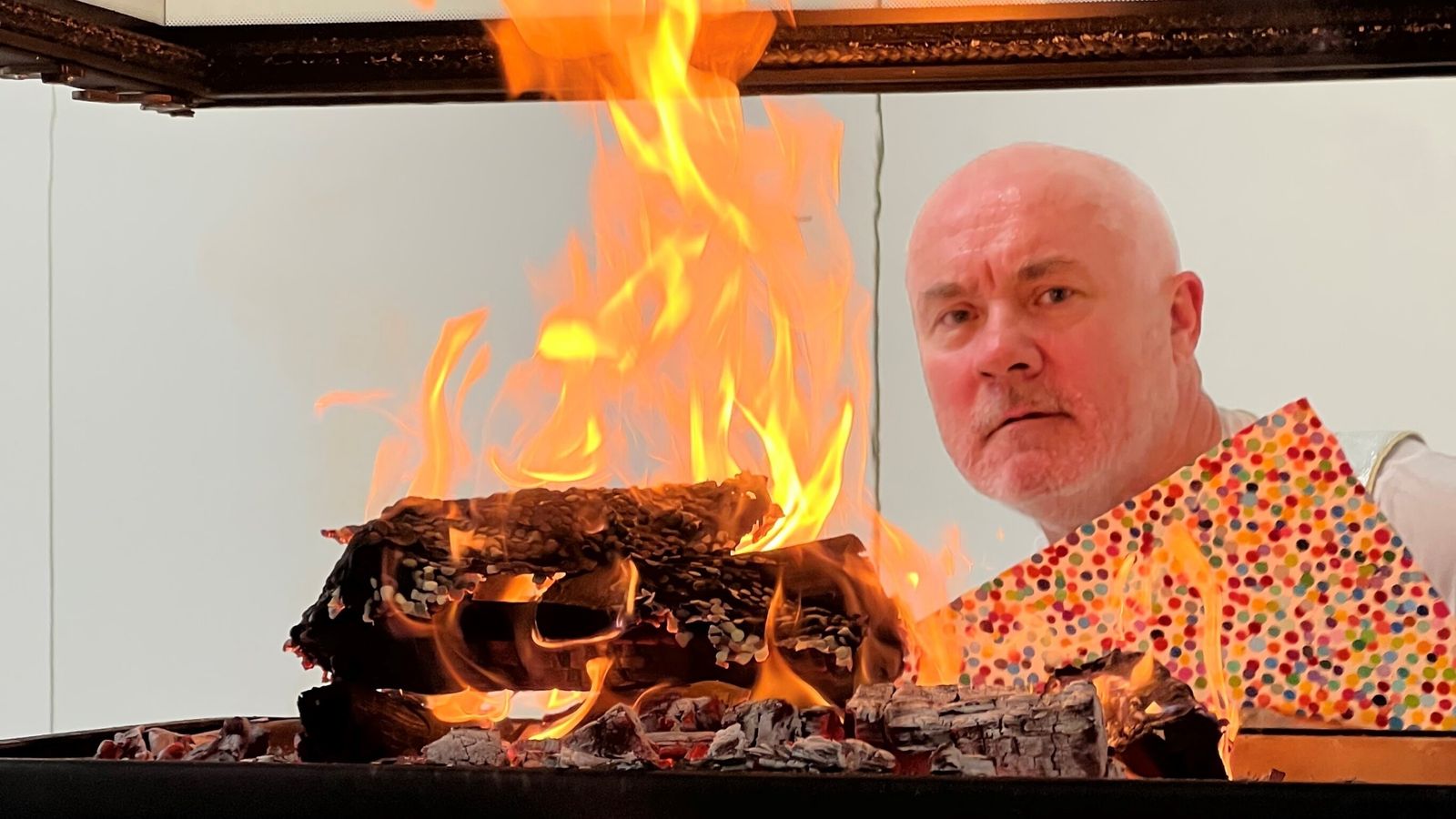 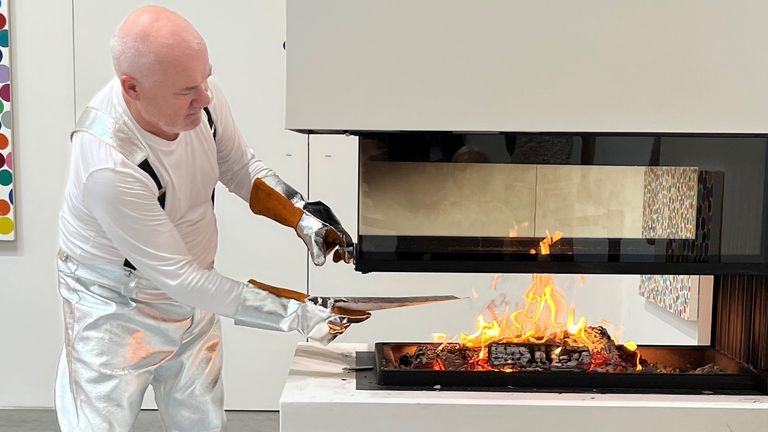 Damien Hirst has started burning millions of pounds worth of his art as part of a project testing the value of physical paintings versus digital works – and told Sky News: “Who’s to judge what’s right and wrong and what’s real and not?”

The British artist, who rose to fame in the 1990s – winning the Turner Prize with an installation of a bisected cow and calf in formaldehyde – is setting fire to works created for The Currency, a project launched in July 2021.

With the collection of 10,000 pieces featuring his famous spot prints, collectors were given a choice: take a physical Hirst original (quite a bargain at $2,000) or opt for an NFT digital version.

Given a year to decide, buyers had to make their minds up in July this year. The result? Some 5,149 physical pieces will remain intact, their virtual doppelgangers deleted – while 4,851 NFTs will live on in the digital sphere, their painting equivalents going up in smoke.

Hirst has now started the fire for the unchosen physical pieces, with burning set to continue at his Newport Street Gallery near Vauxhall, south London, over the next few weeks.

He told Sky News he doesn’t see his project as burning his art, rather transforming it – but admitted that with his background firmly in the physical art world, he did need to get to grips with the digital one.

“I’m kind of rooted in the physical world, so I find the digital world more challenging,” he said. “I think this has to be part of the process. To create truly digital artworks is to destroy the physical artwork.”

On the first day of the burning, the smell of torched paper lingers throughout the gallery. All 10,000 paintings are represented here, with the 5,149 works whose owners opted for the physical greyed out.

At the moment, the majority of the other 4,851 are still in place, ready to be burnt, while blank rectangles occupy the spaces of those torched so far. By the end of the month, these will represent almost half.

Why opt for a digital artwork rather than a physical painting to display on your wall?

Kyle Johns, 28, from Cwmbran in south Wales, said he originally thought it was an obvious choice – but as the year went on, he changed his mind.

“I came into it, I was always art. I was going to have art on the wall. But it changed. We were in the community and it was nice. We were all in an [online] group and it’s just been brilliant.

“Over the year, the NFT became appealing. It’s hard to explain. If I try and tell my mum I’ve got a picture of a picture that’s going to be burnt, it doesn’t make sense. But when you think of it as the future, it is an art form, it’s digital – and we all have a phone.

“I’m not taking my wall [out] with me, I’m taking my phone and my NFT collection.”

Hirst says he views The Currency as a work of art in which people participate by buying, holding, selling and exchanging the works. The community, the burning, is all part of the art, part of the experiment.

Mr Johns, whose physical piece will burn later in October, says he may look to sell at some point, but for now he is enjoying the experience.

His joining The Currency led to a charity fundraising event supported by the artist – and he now even has a tattoo of another of Hirst’s famous artworks, the formaldehyde shark.

Read more:
Is setting fire to millions of pounds worth of art a good idea?
Why are female artists losing out?

Zaheer Raffeeq, 28, who lives in London, opted to keep a physical Hirst painting – deciding three days before the deadline.

”NFTs are too new for me, whereas having something I can hold – I prefer that,” he said. “I thought it was taking too much of a risk to take the NFT.

“I see why people picked the NFT, because it’s also cool to say that Damien Hirst burnt my piece of art… I think I made the right choice.”

Is he worried he might miss out on a lot of money should the value of the NFTs rise more than the physical pieces?

“I think I would have thought the same thing if I’d had the NFT,” he said.

Once the burning is complete, who knows what will happen to the value of either of the sets, physical or digital? NFTs certainly have their critics – but Hirst says it is not for anyone to judge what others appreciate as art.

“With NFTs, we’re making art for people who haven’t been born yet,” he said. “Who’s to judge what’s right and wrong and what’s real and not?

“The people who aren’t born yet are going to decide what’s going to be remembered and what’s not. We’re just here to try and record today for the people of the future.”