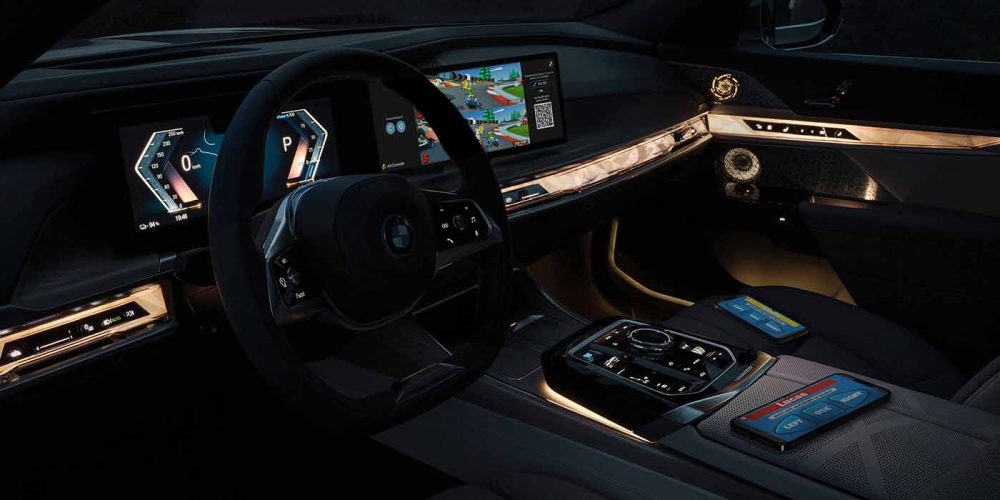 BMW Group has announced a partnership with gaming platform AirConsole to implement “casual” video game options into the curved displays of new BMW vehicles. The games will exist within BMW’s infotainment system and allow drivers and their passengers to use their smartphones as controllers.

In a press release today, BMW Group shared that it chose AirConsole as its video game partner through the BMW Startup Garage program, which works as a venture client unit for early stage startups. The program takes startups that graduated from accelerators and helps validate their prototypes, connecting them with decision makers at BMW Group for business development.

Beginning in new BMW vehicles next year, AirConsole’s catalog of video games will be accessible through the vehicle’s infotainment system, allowing for new games and seamless updates to be performed over-the-air.

Aside from the curved displays that will be present in the 2023 BMW EVs, drivers will only need a smartphone to use as their controller(s) in order to enjoy a bunch of single and multi-player games. Players will simply scan a QR code from the BMW’s display to connect their “controller,” then they’re ready to play.

Senior vice president of BMW’s Group connected company development Stephan Durach spoke to the new partnership with AirConsole and what it means for future EV drivers:

With AirConsole we will leverage innovative technologies combined with a broad variety of fun and multiplayer games. This will make every waiting situation inside the vehicle, such as charging, an enjoyable moment.

By combining the tech of curved EV displays with the ease of use of dynamic smartphone capabilities, BMW looks to deliver a new type cordless “console” to its drivers and compete with other EV automakers that offer similar video game technology, like Tesla for instance. Anthony Cliquot, CEO of N-Dream, the company responsible for the AirConsole brand, shared excitement in bringing games into the cockpit of future BMW vehicles:

We are extremely proud to spearhead gaming inside vehicles with BMW and are excited to create new games for in-car entertainment. Our ingenious architecture coupled with the ease of access of our platform will change the way people get entertained in their vehicles.

No word yet on which of BMW’s upcoming models will come equipped with AirConsole’s video game catalog, but we should learn more in 2023 as the EVs begin to roll out.