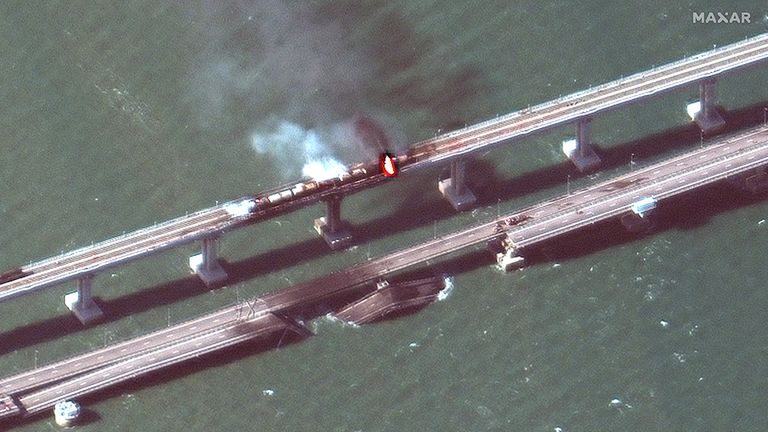 A huge plume of smoke and flames can be seen in satellite images captured shortly after a key bridge connecting Russia to Crimea was damaged in an explosion on Saturday.

Russia has accused Ukraine of carrying out an attack on the bridge, with President Vladimir Putin saying Monday’s deadly missile strikes targeting Ukrainian cities were in retaliation for Kyiv’s “terrorist action” against Russian territory.

Images released by satellite imaging company Maxar Technologies clearly show a large section of the bridge used by vehicles has collapsed into the water.

A fire is also visible on the parallel section of the bridge which is a rail line. The blaze appears to be on what is thought to be a freight train which may have been transporting flammable goods.

The clarity of the image shows scorch marks on the surface of the road, suggesting the source of the explosion may have been above rather than below the bridge.

The amount of smoke coming from the fire was so significant it can be seen in this wide satellite image. It shows the whole length of the Kerch Bridge, which at around 12 miles is the longest bridge in Europe.

It also shows that the site of the explosion is in between the main land of Crimea and Tuzla island, which sits between the annexed Crimean peninsula and Russia.

This means the damaged part of the bridge is over deep water as opposed to land or shallower parts of the Strait of Kerch. This may make repairs more difficult.

Images supplied by Planet Labs, another satellite imaging company, provide a chance to see how the bridge looked before and after the explosion.

The photos were captured a day apart.

Nick Waters, a specialist for the investigative group Bellingcat, noted that the explosion impacted the lane used by traffic travelling towards Ukraine.

The Data and Forensics team is a multi-skilled unit dedicated to providing transparent journalism from Sky News. We gather, analyse and visualise data to tell data-driven stories. We combine traditional reporting skills with advanced analysis of satellite images, social media and other open source information. Through multimedia storytelling we aim to better explain the world while also showing how our journalism is done.