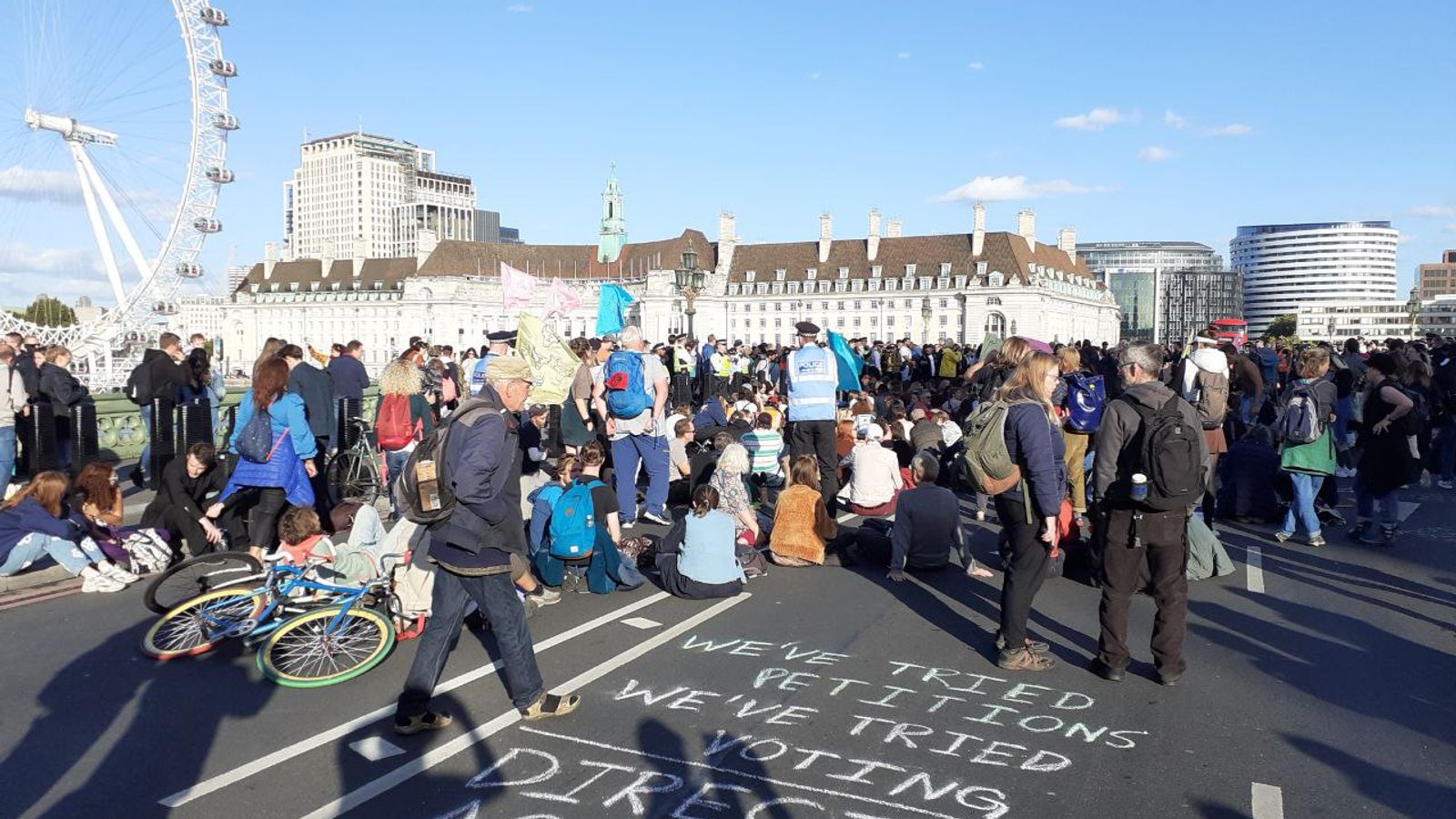 More than 100 people have been arrested by the Metropolitan Police after a weekend of protests by environmental groups in the capital.

Officers in Green Park arrested two people from the Animal Rebellion group who were accused of stealing milk and damaging two shops in central London on Friday afternoon.

Stephen Bone, 40, of Clacton-on-Sea, Essex, and Sofia Fernandes Pontes, 26, of Copenhagen Street, Islington, north London, were both charged in the early hours of Sunday with two counts of criminal damage and two counts of theft.

The counts of theft relate to milk allegedly taken from the shops and used in the acts of criminal damage – with milk having been poured on carpets and food displays.

Bone remains in custody and will appear at Westminster Magistrates’ Court on Monday.

Fernandes Pontes was bailed and will appear at the same court on 7 November.

Officers have said they were acting on information that those in the vehicle were intending to play a “leading role in causing damage later that day”.

Police seized items from them including fire extinguishers filled with paint.

Animal Rebellion, which said it was protesting against a “food system built on the exploitation of animals”, added that among the stores targeted were Selfridges; Fortnum and Mason; Farlows, a hunting and fishing shop on Pall Mall, and William Evans, a shooting supply shop.

It had earlier put out a message “calling all vegans to occupy London”.

The Met has said the “main body” of Animal Rebellion protesters was closely monitored as they moved around central London over the weekend.

Away from the main protest group, there were three incidents where damage was caused to shops and a restaurant by people emptying tins of paint onto windows and floors.

Nine people were arrested on suspicion of criminal damage in relation to those incidents.

Meanwhile, 18 protesters from Animal Rebellion who blocked Westminster Bridge on Saturday evening and refused to leave when requested to do so were arrested.

Earlier that day, 24 protesters linked to the Just Stop Oil group were arrested for obstructing the highway after they blocked Edgware Road and Upper Berkeley Street and Marylebone Road and Baker Street.

On Sunday afternoon, 47 people from the same group were arrested when they blocked roads in the vicinity of Piccadilly Circus with some using locking devices to try to delay police interventions.

Animal Rebellion describes itself as a “mass movement that uses non-violent direct action and civil disobedience to campaign for animal and climate justice”.

Just Stop Oil describes itself as a coalition of groups working together to ensure the government commits to halting new fossil fuel licensing and production.

On Friday, Business Secretary Jacob Rees-Mogg insisted a fresh licensing round for oil and gas exploration will boost the UK’s economy and energy security as the regulator embarked on issuing a series of new offshore licences.

He said said Vladimir Putin‘s invasion of Ukraine made it “more important than ever that we make the most of sovereign energy resources”.

Superintendent Chris Green, who led the policing operation to arrest the activists, said: “This weekend we saw repeated efforts to cause damage to businesses and to unreasonably disrupt the lives of ordinary Londoners by blocking roads.

“The policing operation required to respond to these challenges is significant. It requires many officers out on the ground in key locations in addition to those who are needed to process prisoners and then carry out the investigations to turn arrests into charges and ultimately, outcomes at court.

“We fully support peaceful protest and will always try to work with organisers so that protests can go ahead safely, but the public rightly expect us to respond swiftly and effectively where protest crosses the line into criminality.”