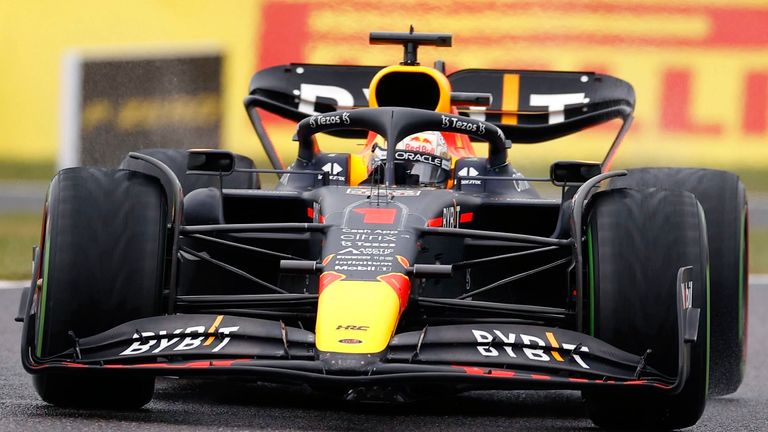 There was huge confusion at the chequered flag amid uncertainty over whether full or partial points would be awarded for a race in which only 29 of the 53 scheduled laps were completed.

With between 50% and 75% of the laps completed, most of the F1 paddock believed Verstappen would only be awarded 19 points for his victory.

But for the Japanese GP there was a different interpretation of the rules, which state that the reduced points are only applied if a race is suspended “and cannot be resumed”.

Verstappen was clearly confused by the situation as celebrations began and were then paused, but it was eventually confirmed that full points had been awarded, sealing the 25-year-old’s triumph with four races of the season remaining.

“The first one is a little more emotional, the second one is more beautiful,” Verstappen said.

“Looking back, what a year we’ve had so far. It’s been incredible. It’s something I could never have imagined. After last year, fighting until the end, and then having such a good car again this year. I’m so thankful to everyone who has been contributing to this success.”

The Dutchman would have been denied the title if Charles Leclerc had come second, but the Ferrari driver’s final-lap error saw him given a five-second penalty – for leaving the track and gaining an advantage – that demoted him to third behind the other Red Bull of Sergio Perez.

Verstappen’s 13th victory in 18 races this season, and his sixth in the last seven rounds, took him an unassailable 113 points clear in the world championship.

After coming through the most intense of battles with Lewis Hamilton last year, Verstappen has been in a league of his own in 2022.