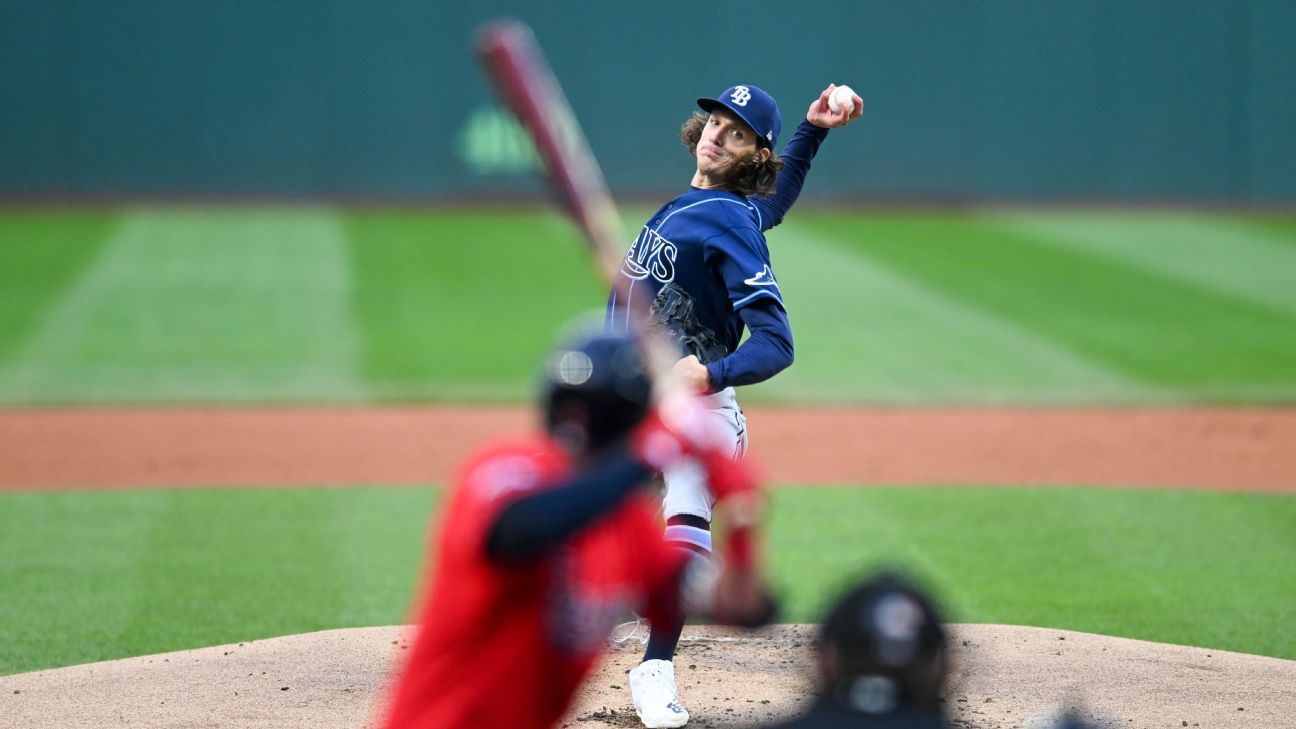 MLB’s first-ever wild-card series weekend is in full swing. And as many as four teams could be sent packing today.

Saturday’s festivities begin with the visiting Tampa Bay Rays looking to stave off elimination against the Cleveland Guardians, followed by the Seattle Mariners hoping to knock out the Blue Jays in Toronto. Then it’s the New York Mets trying to avoid a home sweep against the San Diego Padres and, finally, the Philadelphia Phillies eyeing a series win against the Cardinals in St. Louis.

What to watch for: After a Game 1 loss, it will be up the righty Glasnow to save the Rays’ season on Saturday. It’s quite the challenge considering he just returned to make his first two starts down the stretch (allowing one run in 6 2/3 innings) after undergoing Tommy John surgery in Aug. 2021. Glasnow and the Rays’ staff both say the 28-year-old’s stuff is as good as ever, but he will be limited to 4-5 innings in Game 2.

Normally, that would be an unusual strategy in an elimination game, but it’s business as usual for a Tampa Bay team quite accustomed to turning things over to its bullpen. The Rays led the majors in innings pitched by relievers, and no other 2022 postseason team finished higher than 11th. It’s a feature for the Rays — not a bug.

Meanwhile, the 24-year-old McKenzie will take the mound with a chance to pitch Cleveland to its first playoff series win since the 2016 ALCS. McKenzie’s ERA dropped this season by just about two runs from his 2021 mark, and now he has a chance to follow Guardians ace Shane Bieber‘s strong Game 1 outing with one of his own. — Jesse Rogers

What to watch for: Few opposing pitchers know the Blue Jays as well as Robbie Ray. He spent last season with Toronto, won the American League Cy Young Award, absconded for Seattle as a free agent and now can end his former team’s season Saturday, as the Mariners need just one more win following their 4-0 victory against the Blue Jays in Game 1 of their wild-card series. Seattle’s offense quieted a raucous Rogers Centre crowd with three first-run innings in Game 1, and it’ll look to touch up Gausman, Ray’s replacement in the Jays’ rotation and Game 2 opponent, just the same. The stakes for the Mariners are clear: With a win in Game 2 (or Game 3), they’ll advance to the division series against AL West rival Houston — and ensure hosting a postseason game for the first time since 2001. For Toronto, getting to Ray is imperative. If they don’t, the Jays’ October could be a short one. — Jeff Passan

What to watch for: It doesn’t matter that the Mets won 101 regular-season games. It all comes down to deGrom to help save New York’s season on Saturday. The Mets will need deGrom at the top of his game, with their offense struggling in big moments in recent weeks, most notably during their disastrous final series against the Braves. Even with Starling Marte back in the lineup, the Mets looked sluggish on Friday, leaving eight runners on base, and failing to capitalize on any momentum they built off Yu Darvish.

The Padres counter deGrom with Snell, one of the best pitchers in baseball during the second half. Since the All-Star break, Snell has the second-highest strikeout rate in baseball (12.12 K/9) among all starters, ranking behind just Carlos Rodon, the fifth-best ERA (2.19), third-best FIP (2.23) and the second-highest fWAR. While Snell has not looked like a former Cy Young Award winner during his time in San Diego, he has found his form again in recent months. The Mets have their work cut out for them. — Joon Lee

What to watch for: The Cardinals need a win to save their season — and they might also need a closer. Ryan Helsley, dominant all year, was noticeably erratic in the ninth inning of Game 1, setting the stage for an improbable Phillies comeback. Cardinals manager Oliver Marmol said he “started to lose a little bit of feel for his pitches,” a byproduct of the right middle finger he jammed three days earlier. At the very least, it seems as though the Cardinals won’t have him for Game 2 — and that could prompt them to turn to Jack Flaherty, previously hailed as their ace, to pitch in a save situation. Flaherty was warming up in the ninth inning alongside Andre Pallante, and Marmol kept Pallante throwing a little longer than expected in order to save Flaherty for potential usage in Game 2.

That might not matter if the Cardinals can’t get to Nola, a perfect example of why a team like the Phillies can be so dangerous in a best-of-three series. The Phillies’ roster is littered with issues, but their lineup has top-end talent in Bryce Harper, J.T. Realmuto and Kyle Schwarber, and their pitching staff is fronted by two bona fide aces in Zack Wheeler and Nola. Wheeler held the Cardinals scoreless through 6 1/3 innings in Game 1. And Nola, who pitched 6 2/3 shutout innings against the Astros in the Phillies’ clincher earlier this week, is perfectly capable of doing the same. But Mikolas, who has a 2.13 ERA in two starts against the Phillies this season, can hang with him. — Alden Gonzalez

DeGrom ‘excited’ to start G2 with season on line
Houston, down 19 in 4th, rallies to stun Memphis