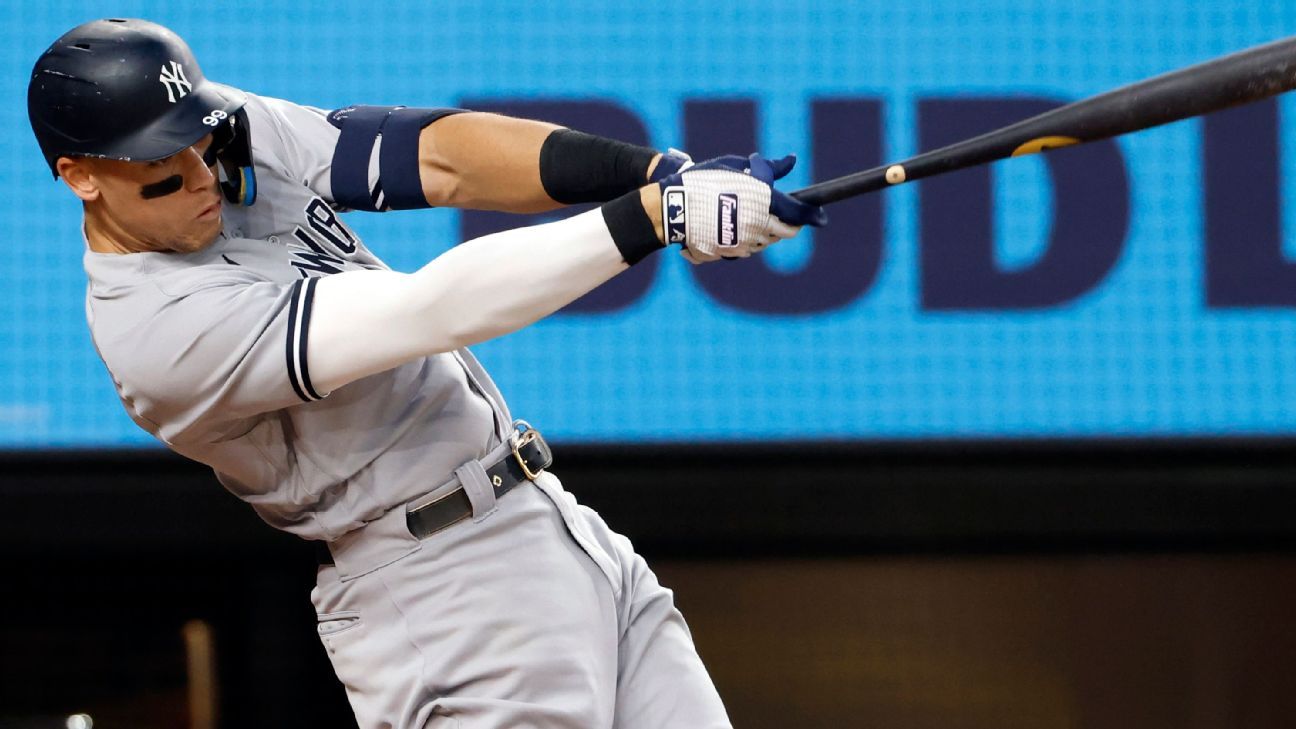 The American League has a new single-season home run king.

New York Yankees star Aaron Judge launched his 62nd home run of the season Tuesday on the road against the Texas Rangers, breaking the AL’s record he shared with Roger Maris.

After depositing a Tim Mayza sinker into the Toronto Blue Jays bullpen to tie Maris’ mark last Wednesday, Judge went without a home run during the Yankees’ final regular-season homestand — a three-game series against the Baltimore Orioles. Back on the road, Judge, who had gone 2-for-9 with two singles in two games against the Rangers through Game 1 of Tuesday’s doubleheader, took Texas pitcher Jesus Tinoco deep in the first inning of the nightcap to reach No. 62.

Remember where you were when #AaronJudge made history. 6️⃣2️⃣ #AllRise pic.twitter.com/w4kbDJf5ZC

The Yankees gathered to meet Judge at home plate after the home run, and he took off his helmet as he walked back to the dugout to acknowledge the fans. When he took the field in the bottom of the inning, he was again given a standing ovation.

The ball was caught by Cory Youmans of Dallas, who was sitting in Section 31. When asked what he was going to do with the ball while being taken away with security to have the ball authenticated, Youmans responded, “Good question. I haven’t thought about it.”

Judge was later removed from the game, and the Rangers went on to win, 3-2. The Yankees won the first game of the doubleheader, 5-4.

The record-setting homer came three days after the 61st anniversary of the day Maris passed the legendary Babe Ruth with his 61st home run.

“[It is an] honor to be given a chance to be associated with Maris,” Judge said Wednesday after he became forever linked to the Yankees legend as the only players in franchise history to hit 61 home runs. “I can’t even describe it. It’s such an honor to know what Maris did in this game. To get a chance to tie Roger Maris, that’s stuff you dream about.”

Only Barry Bonds (73), Mark McGwire (70, 65) and Sammy Sosa (66, 64, 63) are ahead of Judge on MLB’s single-season home run list. But while Judge holds the AL record, Maris’ son, Roger Maris Jr., said this week that he believes Judge should be recognized as the true “home run king.”

Maris’ mark stood as the all-time MLB record up until McGwire passed it by hitting 70 in 1998. Bonds surpassed McGwire in 2001, with baseball’s official single-season record of 73 home runs. But Maris Jr. diminished the accomplishments of the two sluggers, who reached their feats during the so-called steroid era.

“He plays the game the right way,” Maris Jr. said of Judge earlier this week. “And I think it gives people the chance to look at somebody who should be revered for hitting 62 home runs, and not just a guy who hit it in the American League, but for being the actual single-season home run champion. That’s who he is. It’s 62, and I think that’s what needs to happen.”

Judge, who grew up about half an hour east of San Francisco as a Giants fan, has said that he believes that Bonds’ 73 homers is the rightful single-season mark.

New York manager Aaron Boone said he feels privileged to have had a front-row seat to baseball history.

“The history of this game is one of its calling cards,” Boone said. “The number 61. I’ve known about that number for my entire life. I think one thing that makes our sport a little more special than the others, is the history of it all. We do history really well. And this has been a year and a season where we’re in the middle of one of those magical historical moments, and that’s tied to a number. And that’s pretty neat.”

The Yankees will enter the postseason as the No. 2 seed in the American League. They will conclude the regular season Wednesday in Texas.