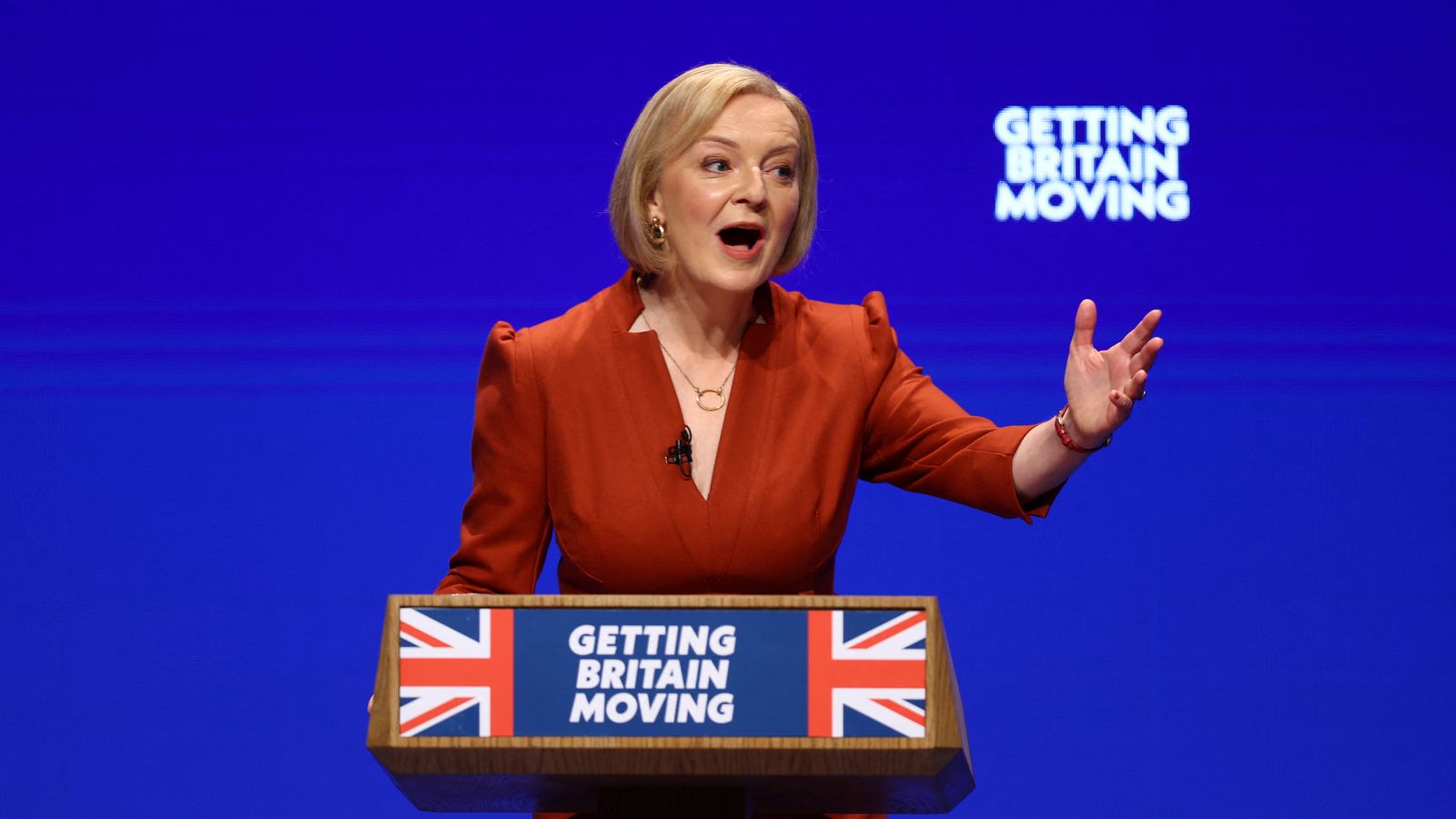 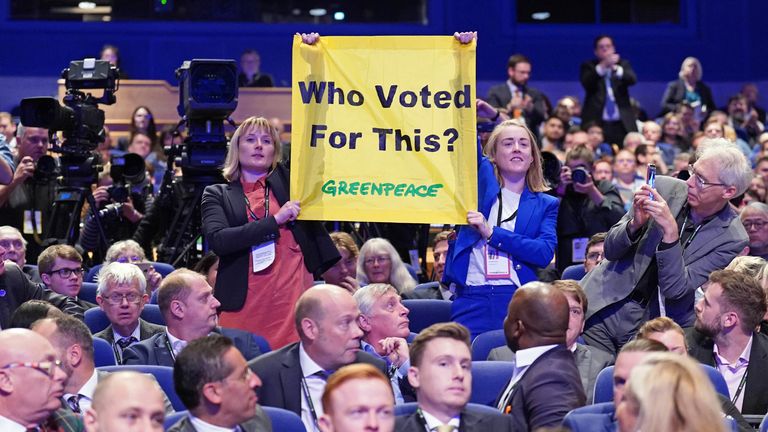 Liz Truss vowed to “get Britain through the tempest” and insisted “everyone will benefit” from the result of her economic policies in her keynote party conference speech during which she was heckled by climate activists.

Addressing Conservative members at the event in Birmingham, as she battles to save her premiership, the prime minister acknowledged that “these are stormy days”.

“In these tough times, we need to step up,” she continued.

“I am determined to get Britain moving, to get us through the tempest and put us on a stronger footing as a nation.”

Ms Truss was interrupted by two Greenpeace protesters who shouted: “Who voted for this,” as they held up a banner.

They were quickly removed by security in the conference hall.

In a tweet after the incident, Greenpeace said activists were there to “denounce the prime minister ‘shredding’ her party’s 2019 manifesto promises”.

The group added: “The PM is U-turning on fracking, strong climate action, and world-leading environmental protections. Who voted for this?”

Continuing, Ms Truss told the audience she and Chancellor Kwasi Kwarteng “will keep closely co-ordinating our monetary and fiscal policy” after the government’s tax-cutting mini-budget saw the pound slump to a record level.

‘Chancellor and I are in lockstep’

She promised “an iron grip on the nation’s finances” and vowed to break Britain out of a “high-tax, low-growth cycle”, adding: “The chancellor and I are in lockstep on this.”

Ms Truss said she is “working flat out” to make sure people can get through the economic crisis.

“So let me be clear: we have your back,” the PM added.

The Conservative leader said she and Mr Kwarteng U-turned on abolishing the 45p tax rate on top earners because it “became a distraction”.

“I get it and I have listened,” she told the audience. 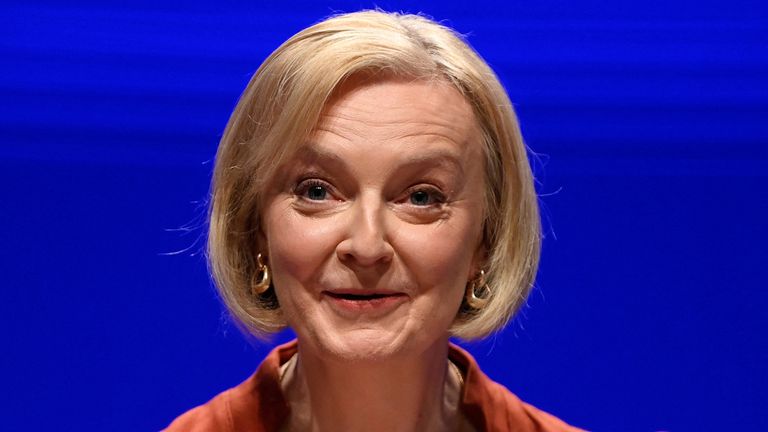 The tax cut for the wealthiest 1% was one of a raft announced by Mr Kwarteng in his mini-budget less than two weeks ago that led to market turmoil – with the pound plummeting, mortgage products being withdrawn, and the Bank of England having to step in to rescue pension funds.

On Tuesday, Home Secretary Suella Braverman accused Tory MPs of staging a “coup” against the PM over the 45p tax rate.

Fellow cabinet minister Simon Clarke also publicly disclosed his objection to the reversal of the policy. 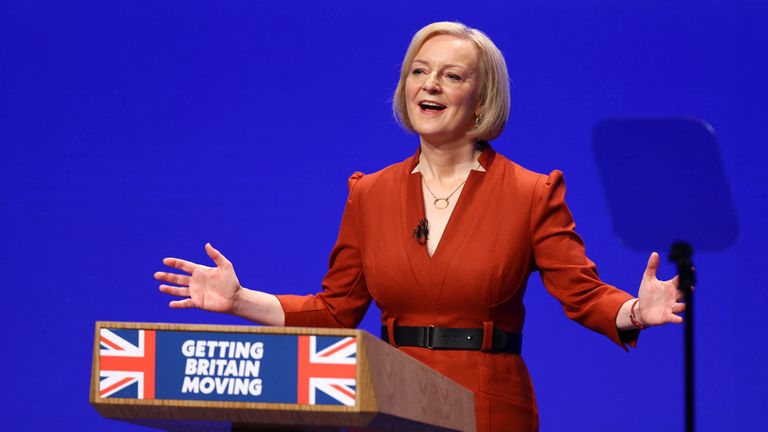 Prime Minister Liz Truss has promised ‘an iron grip on the nation’s finances’ and vowed to break Britain out of a ‘high-tax, low-growth cycle’, adding that she and Kwasi Kwarteng are ‘in lockstep on this’.

Outlining her three priorities for Britain’s economy: “growth, growth and growth”, Ms Truss said she “will not allow the anti-growth coalition of Labour, the Lib Dems and the SNP to hold us back”.

She accused Labour leader Sir Keir Starmer of having “no long-term plan and no vision for Britain”.

Hinting at more “disruption”, the PM also promised that her government will always be “fiscally responsible”.

Ms Truss received applause for saying she is the first prime minister to have gone a comprehensive school.

‘I don’t want my song used as soundtrack to lies’

The prime minister walked onto the stage to M People’s ‘Moving on Up’.

But one member of the 90s dance band was not pleased with the song being used, posting on social media: “I don’t want my song being a soundtrack to lies.”

Labour also pointed out that Heather Small from M People has attended Labour dinners in the past and that her son is a recently elected Labour councillor.

The first standing ovation came when Ms Truss referenced the war in Ukraine, telling the audience of Tory members: “We will make sure this never happens again.”

But the speech, which was just over half an hour long, contained no new policy announcements and made no reference to benefits – which the PM is facing another split within her cabinet over.

Do the public and cabinet still trust Truss?

‘Status quo not an option’

Two additional cabinet ministers have also told Sky News that they believe benefits should be uprated in line with inflation.

It is understood that Chairman of the 1922 Committee of backbench Conservative MPs Sir Graham Brady has warned Ms Truss that any attempt to uprate benefits by average earnings rather than by inflation is unlikely to get through Parliament.

But closing her first conference speech as PM, Ms Truss vowed to “stay the course” amid the infighting within the Conservative Party over her policy agenda.

She urged both Tory members and MPs to “trust me to do what it takes” to push through her “difficult but necessary” pro-growth agenda.

“The status quo is not an option. That is why we can’t give in to the voices of decline,” she said.

Responding to the speech, Labour’s shadow chancellor Rachel Reeves said: “The most important thing the prime minister can do right now to stabilise the economy is to immediately reverse her government’s kamikaze budget when Parliament returns next week.”

While Liberal Democrat leader Sir Ed Davey described the address as a “disaster for families and the economy”.

Ms Truss exited the stage to applause and quickly left the conference venue.

The under-pressure pound fell against the US dollar following her speech.