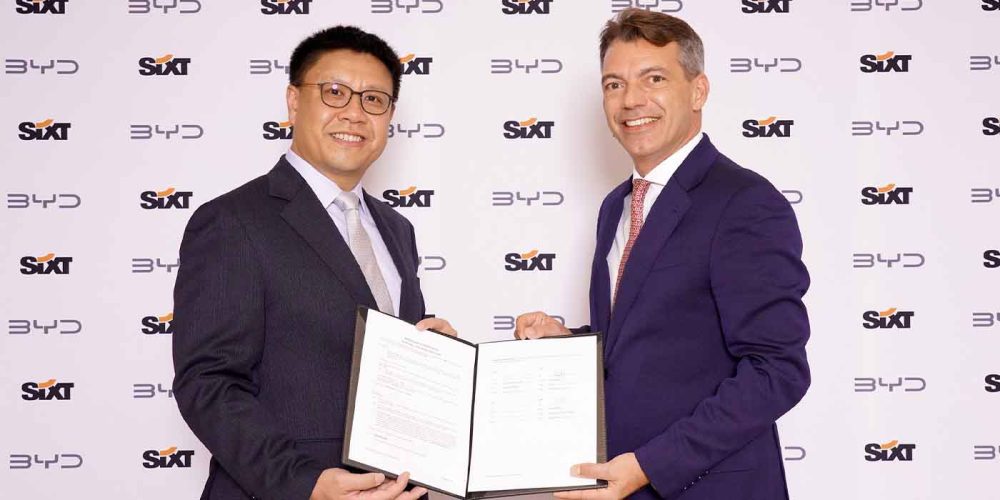 Mere months after announcing its expansion into several European markets, Chinese automaker Build Your Dreams (BYD) is making quick moves to get more of its EVs on streets overseas. German car rental company SIXT has just signed on to purchase around 100,000 EVs from BYD that will be available to rent in Europe beginning this year.

BYD is on a roll this week… actually this entire year. A few days ago, the Chinese EV automaker shared its September sales numbers, showcasing record highs for a seventh straight month and 161% year-over-year growth compared to 2021.

BYD’s new markets outside of China showed similar growth trends, despite the automaker only announcing entry into Europe this summer. BYD will sell three EVs in the EU to begin, including the Atto 3 priced under 40,000 euros.

With EV deliveries to Germany and Sweden beginning this quarter and plans for sales in Japan as well, there is a lot to be optimistic about in regard to BYDs prospective future.

SIXT has taken notice as well, and looks to be the first car rental company in Europe to offer BYD EVs. If you live in Europe and haven’t seen a BYD vehicle before, there’s a good chance you’ll see one on the road before the end of 2022.

SIXT and BYD sign purchase agreement for 100K EVs by 2028

According to a press release from SIXT, it will purchase “around 100,000” EVs from BYD to offer as rental vehicles throughout Europe. The first stage of the agreement includes several thousand BYD EVs that will be available to customers this quarter, beginning in Germany, France, the Netherlands, and the UK.

According to SIXT, its initial order for BYD EVs is the first phase of a six-year rollout that should total roughly 100K vehicles. This massive purchase agreement is part of the rental company’s strategy to electrify 70-90% of its fleet in Europe by 2030. SIXT SE’s chief business officer Vinzenz Pflanz elaborated:

SIXT offers easy-to-use, flexible, and limitless mobility to its customers every day. With over one million units produced from January to August 2022, BYD is the world’s largest vehicle manufacturer in the area of eMobility. The agreement with BYD is an important milestone to deliver on our promise of putting significantly more e-cars onto the street. We are very much looking forward to our cooperation with BYD.

Although SIXT’s current agreement for BYD EVs includes the EU and UK only, the companies relayed that they are already exploring potential opportunities to collaborate in different regions around the world. That could very well mean China and Japan, but probably not the US yet. Although SIXT operates in the United States, BYD does not sell passenger EVs there.

If they were to do so, it could make for some excellent competition, as SIXT’s car rental competitors like Hertz have already signed similar purchase agreements for EVs with automakers like Tesla and most recently, GM. Check back with Electrek soon to see what BYD is up to next, it’s sure to be something.