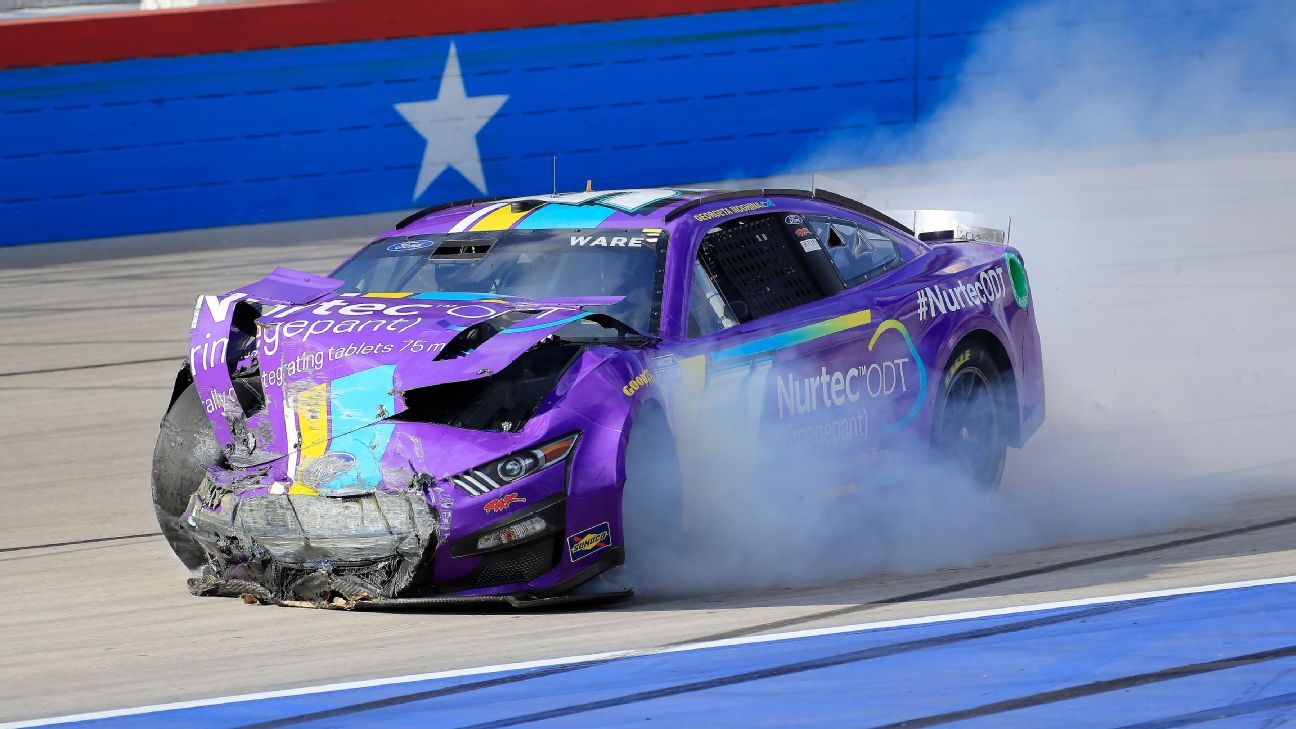 With the playoffs firmly underway, it’s the business end of the NASCAR season, bringing plenty of tension to the sport’s protagonists. But this past weekend, as Chase Elliott won at Talladega Superspeedway, drivers’ disquiet that has bubbled beneath the surface for most of the season came to a head: questioning the safety of the Next Gen car.

Kurt Busch and Alex Bowman are missing from the grid with concussions suffered in the Next Gen car, Cody Ware confirmed Tuesday that he’ll skip the Charlotte Roval because of the broken foot he endured in the Next Gen. Denny Hamlin and Kevin Harvick have been vocal in their criticisms of NASCAR’s approach to safety this season. On Saturday, Elliott said he felt safety in the series was going “backward.”

With so many opinions being exchanged on what is the biggest topic in any motorsport, ESPN turned to Ryan McGee and Marty Smith for their takes on driver safety in NASCAR.

– Watch Formula One all season long on ESPN
– Don’t have ESPN? Get instant access

Smith: It’s really obvious when you hear champion-level, first-ballot Hall of Fame-level drivers voicing the concern that they are. Hamlin was extremely vocal at Talladega that the racecar is not as safe as it should be, and that drivers have told that to NASCAR time and again. According to Hamlin, NASCAR wanted the Next Gen car on the racetrack at all costs, and then he repeated himself: at all costs. I’ve had conversations with drivers, this is something that they are very concerned about, and they are calling for change. I would expect NASCAR will listen to them, and they better listen to them.

McGee: And I think that’s the difference now versus not that long ago, and certainly not when you and I first started covering the sport, is that they’re going to listen. You and I have lived through multiple generations of racecars now, and there have been complaints before, and a lot of times the response was, “Well, this is what you got. Put your people to work.” I really think now the difference is that NASCAR President Steve Phelps talks with drivers all the time. It had to get to an unfortunate position with multiple drivers, but it sounds like they’re in the process of trying to make changes as immediately as they possibly can. Is that your take?

Smith: They need to, and I do think they’re going to make changes. These cars are very rigid. There’s not a lot of give when you crash, and they don’t crush the way that the previous racecar did. And so the previous racecar, because there was more crush in it, there was more give in it. It wasn’t as rigid. That energy was dissipated away from the driver in a different way than it is now. More energy is making its way to the driver now because the car is so much stiffer.

McGee: I go back to when I covered the Indy Racing League back in the late ’90s, and that was like this: This was a spec car, there wasn’t a whole lot of creative engineering going on the race shop; it was, “This is the car you have.” They were breaking guys’ backs because everything had been focused on forward impacts. They weren’t thinking clearly about cars backing into walls. Everybody was fine if they crashed straight ahead or even if they crashed side to side, but as soon as they backed in even a tiny little impact, they were cracking vertebra. That’s what this feels like. There was so much focus in one direction that maybe there wasn’t enough in the other direction.

Smith: The drivers will tell you, they implored NASCAR: “We need to change this.” And according to those drivers, NASCAR was hell bent to get this thing to the race track, and they did that, and it came with great fanfare. You and me have been very, very complimentary of the racing and the show, but when the show ends up with guys that maybe did not come out of accidents the way they would’ve in a past racecar, then it’s time for change. Period.

McGee: Everybody I’ve talked to is working really hard on this now. It’s just a matter of getting it out on a race track on a Sunday.

Smith: When you have a guy like Hamlin who says out loud, “It needs a complete redesign,” I don’t think that he says that flippantly. I think that he means what he’s saying, that the frustration and the concern has gotten to a place where NASCAR needs to listen to these engineers on these race teams, and I think we’re at that point. When the drivers start to get really vocal and “Good Morning America” is doing stories on NASCAR safety, I think that the sanctioning body will listen.

McGee: And I think they are listening. It’s just a matter of how quickly they can get it turned around. If they could take that car with the racing that we’ve seen this season and eliminate these issues, then it’s a home run.

Smith: Home run. The competition this year has been thrilling. We’ve had record numbers of winners and it’s just been a season full of new energy and it’s been awesome to see. But this is something that’s very concerning to the competitors, and so I think NASCAR is understanding that it’s time to make some alterations.

McGee: The only thing that could possibly take away from what we both agree is one of the greatest, most competitive seasons in the history of the sport is this story right here. And so you have to fix it. You have to.

Bowman, Ware to sit race at Roval with injuries
Mets could start deGrom with shot at first place