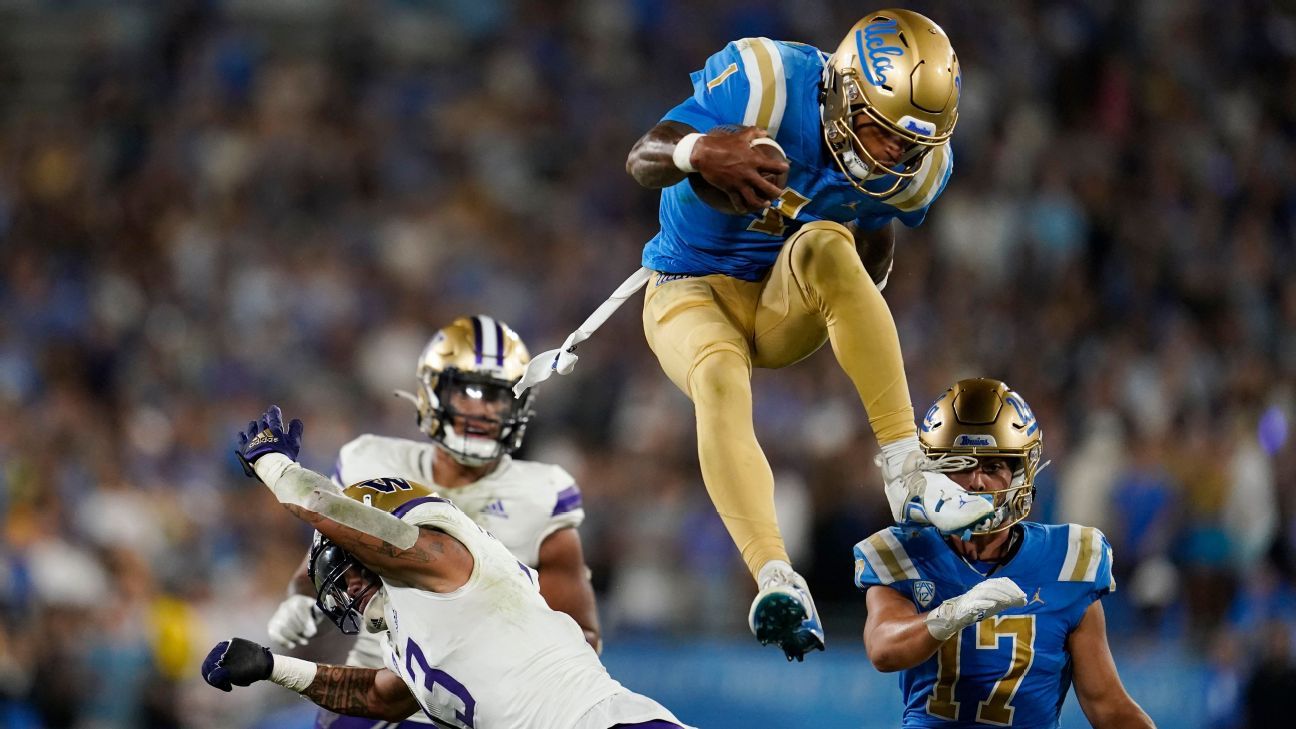 Week 5 of the 2022 college football season gave us a close call (Georgia), a stunning upset (TCU), a backup quarterback stepping in for a Heisman winner to lead ranked Alabama to victory (Jalen Milroe), and no shortage of moments that make us love the sport.

Javaian Lofton. That’s it. Watch it. Then watch it again.

A CATCH OF THE YEAR CANDIDATE FROM LIBERTY’S JAIVIAN LOFTON 🤭 pic.twitter.com/t3E589rU1Q

It’s easily one of the better catches of the season from the Liberty wide receiver.

So were the Ole Miss defensive coaches in a raucous coaches’ booth after Jared Ivey jarred the ball loose from Kentucky quarterback Will Levis in the final minute, preserving the Rebels’ 13th straight home win.

The Ole Miss coaching staff reacting to the game-winning fumble is INCREDIBLE.

OHHHHHHH MY!! WILL LEVIS GETS STRIPPED AND OLE MISS WINS

It was that kind of game, back and forth, with both teams making big plays and big mistakes. But the Rebels’ defense, as coach Lane Kiffin said, had a “big-time defensive day” when it had to. Not just once, either, but twice. The Rebels forced Levis fumbles on Kentucky’s last two possessions of the game.

“It came down to the last play, and our guys showed up,” Kiffin said.

Ole Miss (5-0) won 10 games in the regular season a year ago for the first time in school history. The Rebels could very easily start out 7-0 this season with their next two games against Vanderbilt on the road and Auburn at home.

The Ole Miss sideline (and not just the coaches’ booth) was equally wild after holding on there at the end over a Kentucky team that entered the game ranked No. 7 nationally.

“It was so crazy,” Ole Miss receiver Malik Heath said. “We were like, ‘Ain’t no way we just did this.’ We believed in our defense. We believe our defense is the best defense in the country. … We weren’t worried. They held them one time, so we thought they would do it again.”

They did, and the party was on.

If Mike Leach had to manufacture a game plan for a wedding, the Mississippi State head coach would keep it simple and keep reiterating one point over and over:

Whether speaking from experience or otherwise, that was Leach’s wedding advice to SEC Network reporter Alyssa Lang on Saturday.

After a win vs. the No. 17 Aggies, Mike Leach credits the Bulldogs for being strong on both sides of the ball and gives his two cents on proper wedding arrangements.

“As soon as the season is over or even an off week, go elope,” Leach said. “Trust me on that, go elope. ‘Cause basically every female in the family is going to terrorize you guys until it’s over. Once it’s over, I mean, they’ll be upset for a few days, but it’ll be over and then you’ll cruise along and have a happy marriage, have a happy life.”

Leach even added that he has told all his children he’d give them an extra $10,000 if they did elope.

Small-school moment of the week

North Dakota State has become the FCS’ premier program by figuring how to combine the modernity required to produce two top-five picks at quarterback in the past decade with loads of hilariously old-school physicality. While the typical college football offense doesn’t see much use for fullbacks, NDSU lists five of them on its roster, including the 236-pound Hunter Luepke, last year’s national title game MVP and a Walter Payton Award Watch List nominee.

Luepke gained 106 combined rushing and receiving yards and scored his seventh and eighth touchdowns of the season in Saturday’s 27-14 win over Youngstown State; the second one went viral, not necessarily because of his exploits but because of those around him.

We literally have 4 fullbacks in the game.

Football as it was meant to be played. #FullbackU pic.twitter.com/OJIwZk1Ryw

Luepke and three other fullbacks shared the field for his 12-yard score late in the first quarter. It’s fun when you can double down on your brand and score a touchdown at the same time, huh? (Also on brand: The Bison’s win was over in under three hours. The clock rarely stops running when NDSU has the ball.)

BYU knocked off Utah State 38-26 on Thursday in Provo to hang on to the Old Wagon Wheel in the last scheduled meeting between the two schools before the Cougars’ move to the Big 12.

Quarterback Jaren Hall led BYU by completing 17 of 37 passes for 274 yards and three touchdowns, while running back Christopher Brooks added 90 yards and a touchdown on the ground.

Though, depending on whom you ask, the most impressive BYU performance of the evening might have come from Cosmo the Cougar, who did the following:

The table stunt is just the latest in an already impressive arsenal of talents by Cosmo.

Sonny Dykes grew up in the footprint of what is now the Big 12 while his dad, Spike, was coaching as an assistant at Texas and as head coach at Texas Tech. After his father retired, Dykes returned to coach wide receivers for Mike Leach at Tech from 2000 to 2006. Dykes made a triumphant return to the league in his first Big 12 game as a head coach on Saturday, throttling first-year head coach Brent Venables and Oklahoma 55-24. There’s no doubt it meant something to him to get his first win against the Sooners.

“This was a good one,” Dykes said after the game. “I’ve coached against Oklahoma for a long time and hadn’t had a whole lot of success against these guys. They’re one of the blue bloods of college football, and anytime you have a chance to play against those guys, you’re going to be excited about it. You’re gonna see it as an opportunity to make a name for yourself and as a program to take a step. And I certainly think we did that today. We weren’t outclassed. We didn’t look that way.”

My man just said “TCU is running through Oklahoma like a stimulus check” 💀 pic.twitter.com/d4ChlepOr8

That would be an understatement. The Frogs moved the ball however they wanted, rushing for 361 yards and passing for 307, with no turnovers. A week ago, the TCU student section chanted Dykes’ name at SMU, where he previously coached, which he said was a little embarrassing. This week, though, Dykes looked like he felt at home again.

DTR and UCLA put on a show

On a night when his competition on the other side was a quarterback who was starting to get Heisman buzz, UCLA‘s fifth-year senior quarterback, Dorian Thompson-Robinson, transformed the Rose Bowl into his own personal playground. DTR, as he’s known, hurdled and juked Washington defenders on his way to an upset victory, but no play looked more smooth than this pirouette near the goal line.

Can you give the Heisman to a play? pic.twitter.com/Os0UhIvc7g

As Thompson-Robinson reached the end zone on a short run, he deftly slid to the right of a diving defender, causing him to crash into a teammate. It looked like something out of a choreographed dance routine, and it allowed DTR to walk into the end zone untouched.

The play put the Bruins up by 23 and embodied the kind of statement they produced Friday night. After being ignored for beating four lesser teams to start the season, Chip Kelly’s team announced its presence in the Pac-12 with a signature win, one the Bruins have been lacking in seasons past.

Thanks to some continuity led by DTR and the additions of transfers such as wide receiver Jake Bobo, UCLA suddenly looks like a conference contender that will, at the very least, present tough matchups for the Pac-12’s upper echelon of Utah, Oregon and USC. Who knows, in a few weeks we might be considering the Bruins a part of that bunch too.