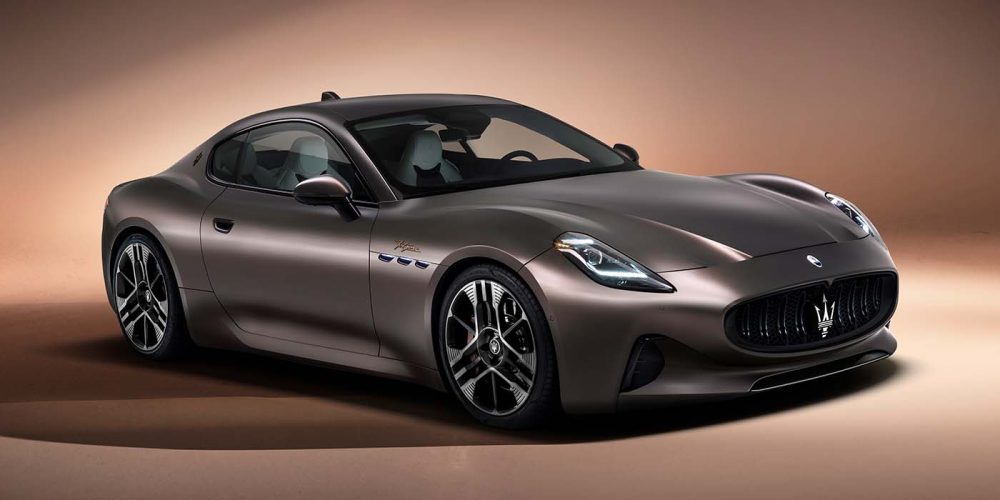 Italian luxury automaker Maserati has moved one step closer to fulfilling its promise of becoming an all-electric brand, sharing the new details and performance specs of its upcoming all-electric GranTurismo Folgore. Starting at a preliminary price of $170,000, Maserati looks to deliver luxury and performance to its fan base while hoping to entice consumers interested in a zero-emission future.

Maserati S.p.A. is an Italian automaker that’s been around since the first World War that currently exists as a subsidiary of Stellantis. In 2018, FCA (the precursor to Stellantis) announced electrification plans that included several Maserati vehicles, but a majority of them were plug-in hybrids. However, during a 2020 event, Maserati introduced a new “Folgore” brand of “electrified” vehicles that would be implemented by 2025.

Originally, the head of Maserati said “electrified” meant both hybrid and full-electric vehicles. However, the Italian automaker took note of Stellantis’s revamped electrification strategy and followed suit, clarifying that it will indeed offer a BEV version of each of its models by 2025.

In September, Maserati shared video footage of the electric GranTurismo Folgore in action alongside a few of its performance specs, but not much else. Now, however, Maserati has unveiled a slew of new details, including sales timelines and preliminary pricing. Spoiler alert: You’d better start saving up now.

Maserati showcased its upcoming luxury BEV sports car in a presentation from Turin, Italy, sharing details of the unique 800V electric platform the GranTurismo Folgore will sit upon.

According to the Italian automaker, the platform was designed using technology derived from Formula E and uses a low “T-bone” battery layout that removes all battery cells from under the passengers. This design optimizes weight distribution and maintains a low center of gravity – two important factors to achieve higher speed and acceleration. Per Maserati:

This 32-module “T-bone” was designed in-house and stores 92.5 kWh of energy. It delivers 610 kW discharge power to operate three independent 300 kW motors, complete with independent torque vectoring. Here are some other pertinent specs:

The GranTurismo will also debut in two separate combustion versions, but we’re not here to talk about those. However, for those savvy traditionalists looking to go all-electric but may miss the roar of combustion, Maserati has a solution for you. The automaker says that the GranTurismo experience is synonymous with a unique V8 sound, so with the all-electric Folgore, the Maserati team took actual recordings of its V8 models and blended it with the natural sounds of the electric power train.

This replicates what Maserati calls its “sound fingerprint,” delivering realistic engine sounds generated in real-time based on the orders of the electric motors and inverters while driving. The sound is accomplished using an acoustic vehicle alerting system (AVAS) in the front, an external engine sound synthesizer (EESS), and a premium 24-channel amp in the trunk.

Pretty cool stuff all around, but is it enough to justify the preliminary pricing Maserati has shared? For the upcoming electric GranTurismo Folgore, Maserati is expecting it to cost between $170,000 and $215,000 in the US (175k-220k euros in EMEA). In addition to those markets, Maserati also intends to sell the GranTurismo in China and Asia-Pacific countries starting at RMB 2 million.

According to Maserati, sales are expected to begin in the EU in July of 2023, followed by the UK and US in September. Other countries should see a start of sales before the end of 2023. Until then, check out this video walkthrough of the all-electric Maserati GranTurismo Folgore.