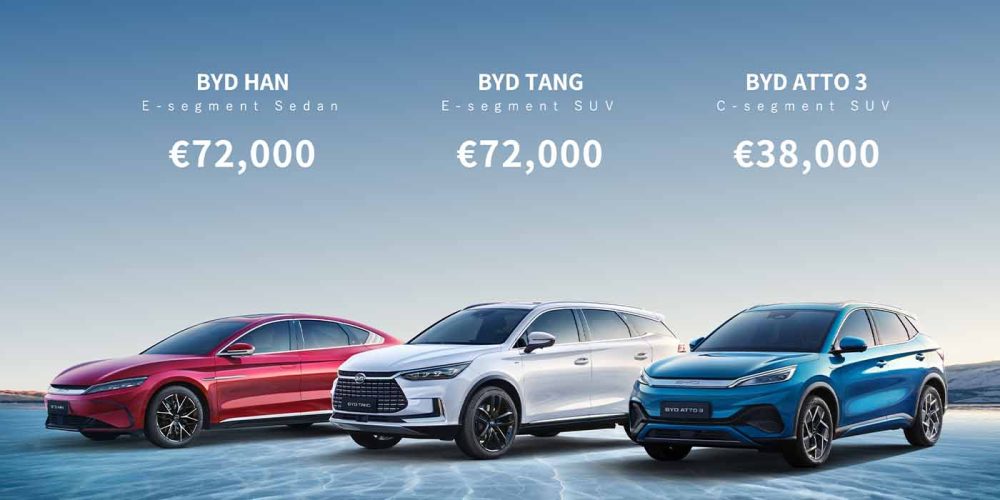 Chinese automaker Build Your Dreams (BYD) continues to stake its case for worldwide attention as it reports tremendous year-over-year EV sales growth for yet another consecutive month. When looking at the company’s growth since 2020 and its recent expansion into new markets outside of China, BYD should be on your radar as a contender to become a globally recognized EV brand.

BYD Auto is an automotive subsidiary of BYD Co. Ltd. currently operating as one of the largest auto manufacturers in China. In 2021 alone, BYD produced over 320,000 BEVs, second in the country to only SAIC Motor.

As an EV automaker, BYD Auto has been delivering vehicles since 2008 when it launched a plug-in hybrid version of its F3 sedan. More recently, however, BYD officially nixed all combustion vehicle production and remains a solely electric brand.

Although the company has found success selling EVs in China, it has only recently begun to expand its sales reach in recent years. BYD has recently announced plans to sell passenger EVs in a bunch of countries throughout Europe. (More on that below).

Today, BYD has shared another successful month of EV sales growth that is already beginning to translate to its new markets overseas.

BYD’s EV sales continue to climb alongside its global reach

As pointed out and translated by CnEVPost, BYD shared its most recent EV sales numbers for September in an announcement on the Hong Kong Stock Exchange. BYD states that it sold a whopping 94,941 BEVs in China last month, up 161.5% compared to September of 2021 (36,306 EVs).

Overall, BYD states that it sold 201,259 new energy vehicles (NEVs) in September alone – a record for the Chinese automaker and its first time eclipsing 200K units in a single month. Furthermore, September’s growth marks seven straight months of record sales. Total BEV sales are up over 183% compared to September of 2021 and up over 15% compared to a month ago.

Check out BYD’s NEV sales growth over the past three years. Notice the leap in sales in 2022 so far:

BYD states that its NEV sales numbers include commercial EVs in addition to passenger vehicles, but the former only contributed to 286 units for the month. That’s still over 200K passenger vehicles sold. These numbers do not even include PHEV sales, which also saw massive YOY growth at over 214%.

Although BYD is clearly a well-respected name with Chinese consumers, other foreign markets may not be as aware of the brand and its lineup of BEVs. Despite its short stint overseas, BYD’s early sales numbers are encouraging. Check them out:

Late last month, BYD officially launched three EVs for the EU markets: the Han, Tang, and Atto 3. These markets now include Belgium, Denmark, Germany, Luxembourg, the Netherlands, Norway, and Sweden. EU pricing starts around 40k euros for the Atto 3. Not to be outdone, BYD has also shared plans to sell its vehicles in Japan as well. As the expansions continue, we can expect the automaker’s sales numbers to continue to trend upward through 2022, especially since it is reporting a backlog of 700,000 units.

We will keep an eye on BYD’s growth through October and the rest of Q4 2022. According to BYD chairman and president, Wang Chuanfu, the company is aiming to achieve monthly deliveries of 280,000 units by the end of the year. At its current growth rate, that’s entirely possible.