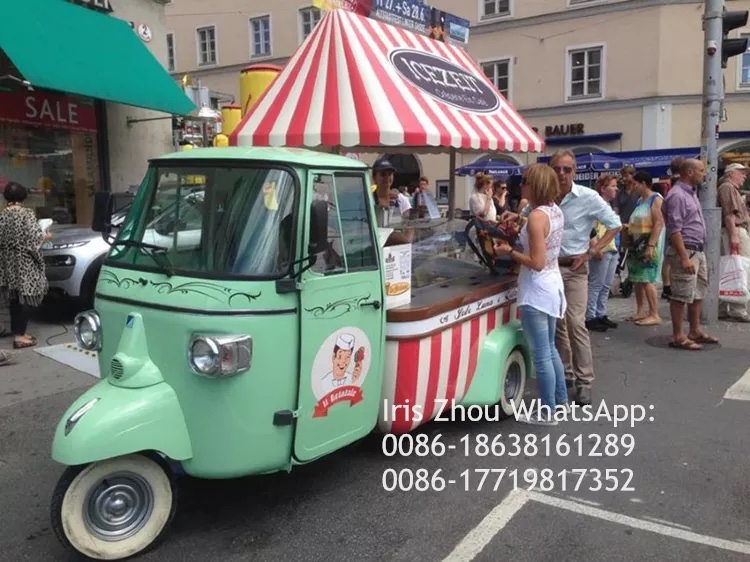 Remember the good ol’ days of hearing the ice cream truck’s jingle coming down the street and running outside with a fistful of quarters to grab your favorite tasty treat?

Yea, me neither, as I’m in my early 30’s and that stuff was mostly phased out by the time we were kids. Why pay a stranger in a questionably shady truck when your mom can just pick up ice pops at Krogers?

But that doesn’t mean I can’t lay on the fake nostalgia for a bygone era that had officially gone by before I came around.

And the best way to relive the romantic ice cream truck period yourself is to step right up and own your very own ice cream truck. Err, well, ice cream trike. This confectionary cart is a three-wheeler. A tasty treat tuk-tuk, if you will.

It’s a vehicle so weird and awesome that it has rightfully earned this week’s title of Awesomely Weird Alibaba Electric Vehicle of the Week.

And it’s electric, so that’s kind of a steep departure from the original as well. Though I imagine that can only be an improvement. I’ve never heard of someone who enjoyed the taste of exhaust mixed in with their Mr. Sprinkles.

And with the price of gas these days, you could end up blowing your whole cone budget just on gas stops, so electric definitely seems like the way to go.

The cool thing about this ice cream trike too is that it’s basically a transformer.

The ice cream tent in back pops up when you’re parked and want to start slinging your frozen delights. But when it’s time to get back on the highway (or let’s face it, probably the sidewalk), the rear end closes back down for supreme aerodynamic performance.

And with a peppy 4,000W motor, you better believe that aerodynamics are going to come into play. The last thing you want is a drippy cone because you didn’t plan for wind resistance.

Ok fine, so it’s not terribly fast or powerful. But it could smoke some of other silly little EVs we’ve featured here before.

And while this is certainly not a family car, that doesn’t mean you can’t make use of it for more than one purpose.

Just think of how cool it would be (or mortifying) for you kid to get dropped off at school in an ice cream trike.

You’ve even got your own reward structure built right into the vehicle. “Thanks for picking me up from school, Dad. Can I have some ice cream?”

“Sorry, Junior. Ice cream is for kids that get straight A’s.”

But if you’ve been looking for a career change, a chance to make your own hours and a vehicle with a perpetually sticky floor, then you could do a heck of a lot worse than this awesome electric ice cream trike.

It may not be the most practical vehicle I’ve ever found on the internet, but it’s certainly one of the most charming!

Tesla confirms Gigafactory Berlin has ramped up to 2,000 cars a week
Tesla unveils its humanoid robot for ‘less than $20,000’