In the Baltic Sea, we’re heading to a crime scene.

The site of suspected sabotage.

We’re sailing towards the place where an alleged attack was carried out on Nord Stream; the biggest underwater gas pipelines running from Russia to Europe.

We left from the Danish island of Bornholm, the closest place to four leaks detected off the coasts of Denmark and Sweden this week.

Suddenly a familiar symbol appears on the boat’s onboard map.

“A skull and crossbones, what does that mean?” I ask our captain, Kim Finne.

“That is the leak,” he replies.

Ahead of us is an exclusion zone of around five miles.

Only the military and official investigators are allowed to get any closer to the leaking pipes as they try to protect the evidence and prove what happened and who is responsible.

It doesn’t take long before we are warned off.

“You are heading towards a restricted area where navigation is prohibited,” the Danish Navy tells us over the radio.

The discovery of leaks in the Nord Stream 1 and 2 pipelines has sparked an international crisis.

All the damage is in international waters.

A few kilometres closer to Bornholm and the reported explosions would have been in Danish waters which could have provoked a NATO response if proven to be deliberate acts.

It’s deeply unsettling for Kim who could smell the leaking gas from his home.

“Do you feel vulnerable living on Bornholm?” I ask him.

“Yes, because Bornholm used to be a really peaceful place and now we see warships, F16 [jets] and explosions so close to Denmark,” he replies.

Many in Europe believe the damage to Nord Stream was deliberate.

Ukraine has accused Russia of terrorism.

“It was a deliberate act of sabotage, and now the Russians are pumping out disinformation and lies. And we’re at work with our allies to get to the bottom of exactly what, precisely what happened,” countered President Joe Biden.

“Who do you think is responsible?” I ask Kim. 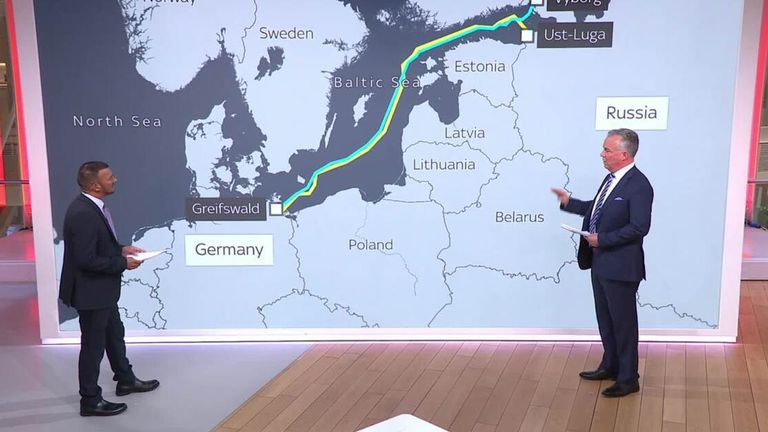 “I will not say I know who has done this but I would definitely say the Russian guy will try to hold Europe in a tighter hand now because they know it’s going to be winter.”

Bornholm’s proximity to the leaks means chemical experts are monitoring the air to check it hasn’t been poisoned.

So far, no dangerous levels have been detected.

But the ruptures in the Nord Stream system have led to what is likely the biggest single release of climate-damaging methane ever recorded according to the United Nations Environment Programme.

Campaigners say what’s happened in the Baltic Sea is both a political crisis and an environmental disaster:

“Methane being such a potent and aggressive gas, this is something that really will be felt.

Read more:
UK energy firms reassess security of North Sea oil and gas rigs
What we know about the Nord Stream leaks and who was behind them

“Over a 20-year period this is something that is equivalent to the Danish emissions of C02 or what maybe 30 million cars in Europe would emit in one year,” explains Mads Flarup Christensen from Greenpeace Nordic.

“It will contribute to the climate crisis that we are in the middle of and that is of course very, very serious.”

The full implications of what has happened off Bornholm’s coast are still playing out.

Further investigation should be possible once gas stops flowing from the pipelines.

But experts warn that even if evidence can be gathered to prove what caused the leaks and if they are the result of a deliberate attack, it’s highly unlikely we will ever definitively know who ordered it.

On Saturday, the Danish energy agency said the Nord Stream 2 gas pipeline under the Baltic Sea appears to have stopped leaking.