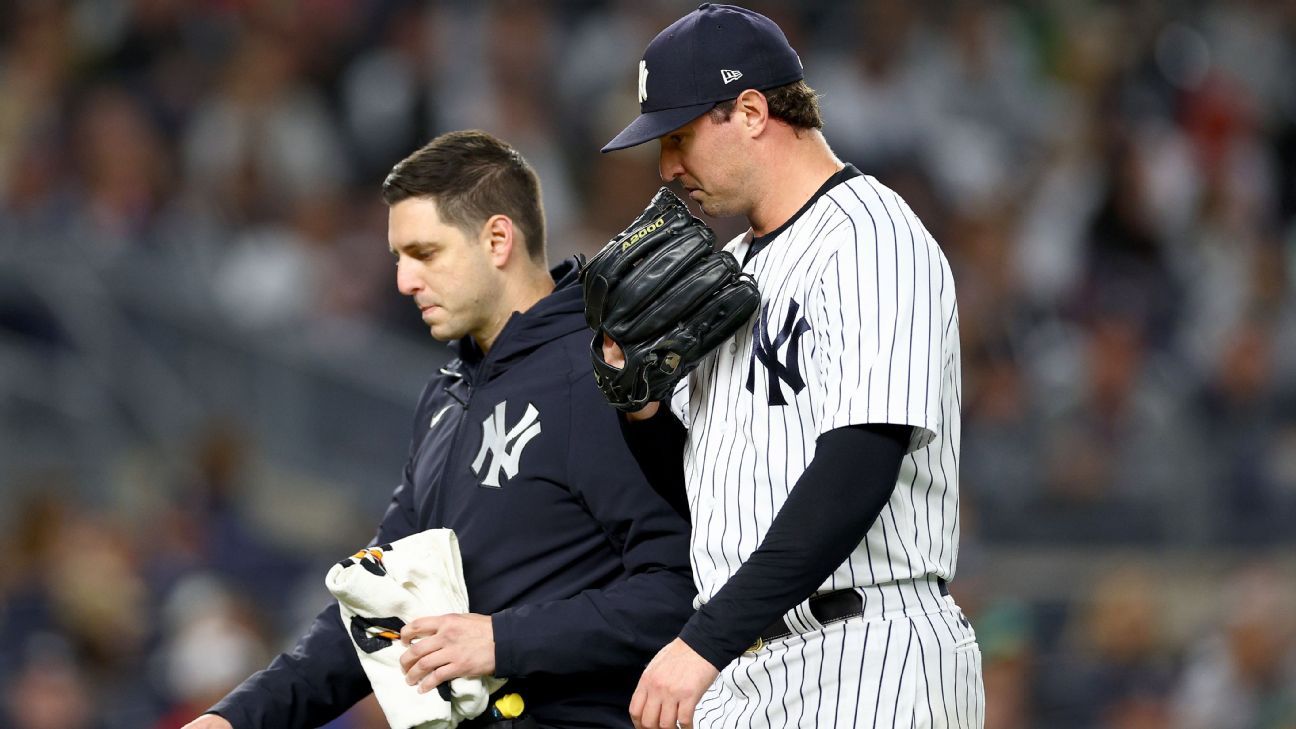 NEW YORK — Zack Britton‘s aspirations to be part of the Yankees‘ postseason roster may have taken yet another hit Friday night after the veteran reliever, who returned last week from Tommy John surgery, was removed from New York’s 2-1 loss to the Baltimore Orioles with left arm fatigue after throwing a run-scoring wild pitch in the sixth inning.

Yankees starter Domingo German walked his first two batters in the sixth and retired Ryan Mountcastle on a groundout; Britton relieved and walked Gunnar Henderson, then threw a pitch to pinch-hitter Jesus Aguilar that went to the backstop, and he failed to cover the plate. Britton was replaced by Ron Marinaccio. Under baseball’s rules, a pitcher must face three batters or complete a half-inning, but he can be replaced earlier if hurt.

Yankees manager Aaron Boone said after the game that Britton’s elbow checked out fine and that hopefully it’s “nothing too serious.”

Britton went through a taxing rehab in his attempt to come back less than a year after underdoing left elbow reconstruction surgery. The Yankees activated Britton from the 60-day injured list on Sept. 22, the same day they placed left-hander Wandy Peralta on the 15-day IL with back tightness. Britton, 34, underwent Tommy John surgery on Sept. 9, 2021. Modern-day Tommy John surgery usually requires a 14-16 month rehab process.

“The reason why I kind of pushed things was because I wanted to pitch this year for this team and help them win,” Britton said last week while addressing his motivation for returning this year, the last option on his contract. “There’s no benefit for me, personally, other than the fact that maybe I can have an impact on a World Series championship team. It’s really the only goal for me at this stage of my career.”

Britton has been ineffective since being activated off the injured list, pitching only ⅔ of an inning across three games with a 13.50 ERA, facing nine batters and retiring only one. After pitching to a 5.89 ERA in 22 appearances in 2021, Britton, who has commanded a $14 million salary while on the IL this season, said he wanted to truly feel like a contributor, particularly because the veteran left-hander of 12 MLB seasons between Baltimore and New York does not have a World Series ring.

New York has already secured the No. 2 seed in the American League and a wild-card round bye.

The Yankees currently have two relievers nearing a return from injury who have been contributors all season. Peralta, who has been a high-leverage option all season, is expected to throw a bullpen session this weekend and might be an option for the Yankees during their last regular-season series, a four-game set against the Texas Rangers in Arlington that begins Monday.

Miguel Castro, who rejoined the team Friday, is also on track to make his way back from a 60-day stint on the IL with a right shoulder strain. It is a similar case for fellow right-handed reliever Albert Abreu, who is close to being fully recovered from right elbow inflammation.