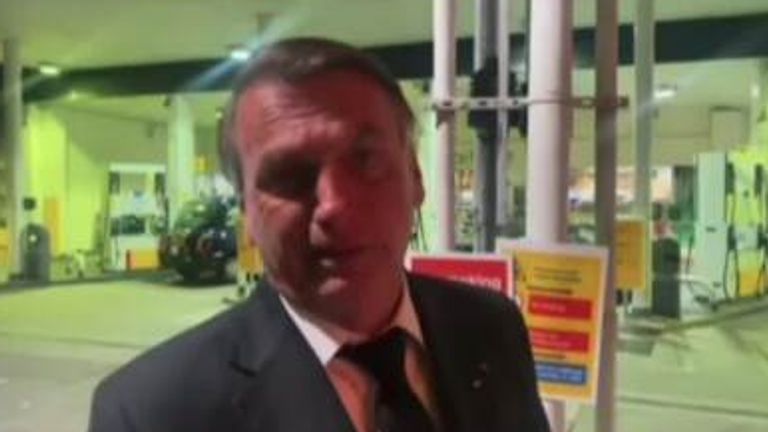 Footballer Neymar has endorsed Brazilian President Jair Bolsonaro in his bid for re-election.

The Brazilian sports star, 30, posted a TikTok video of himself dancing and miming along to the right-wing politician’s campaign jingle.

He then went on to urge his 8.4 million followers to vote for the incumbent president.

Bolsonaro is currently trailing his rival, former left-wing president Luiz Inacio Lula da Silva, in opinion polls ahead of the first round vote on Sunday.

Earlier in the week the president visited a charitable institute in Sao Paulo owned by the Paris Saint-Germain forward.

On that occasion, Neymar appeared in a separate video greeting Bolsonaro but stopped short of outright endorsing him, though he did thank him for his “illustrious visit”.

Bolsonaro was quick to capitalise on the endorsement of the world’s most expensive player, reposting the clip to his Twitter account in a bid to win over undecided voters in the famously football mad country.

Neymar is not the only footballer to endorse Bolsanaro, with Tottenham Hotspur’s Lucas Moura also throwing his support behind him earlier this month telling YouTube channel Cara a Tapa: “I don’t see a perfect presidential candidate but I can’t deny that Bolosonaro is the closest to what I believe.”

Earlier this week, Neymar helped Brazil’s national team thump both Ghana and Tunisia in friendly games running up to the Qatar World Cup which kicks off in November.

Bolsonaro’s rival Lula has also courted celebrity support to boost his bid for the presidency receiving support from a number of Brazilian artists as well as international stars such as Mark Ruffalo, Roger Waters and Danny Glover.

The president is currently trailing his challenger, who lead Brazil for two terms between 2003 and 2019, by 12 points.