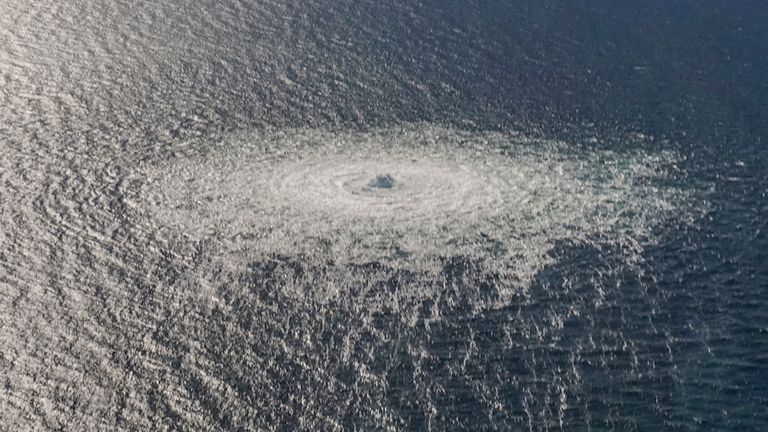 A fourth leak has reportedly been found on the Nord Stream gas pipeline.

Swedish newspaper Svenska Dagbladet quoted the coastguard as saying it had found the leak after the pipelines, which run from Russia to Germany, were damaged in three places earlier this week.

The two other holes are in the Danish economic zone.

They said the mines could have been lowered on a long line, dropped over a boat or placed next to the pipelines with an underwater drone.

The European Union also believes the leaks are a result of sabotage.

Russia has said accusations it is responsible are “predictable” and “stupid”.

The Nord Stream 2 line runs 764 miles (1,230km) from Russia to Germany and had been due to carry gas to Europe until Russia invaded Ukraine and Germany refused to grant a licence.

Gas has spewed into the sea since the first leak was detected on Monday morning about 14 miles (23km) southeast of Denmark’s Bornholm Island.

Read more:
‘Sabotage’: What we know about the Nord Stream leaks and who was behind them

Bjorn Lund, a seismologist with Uppsala University, told broadcaster SVT: “There is no doubt that these were explosions.”

Danish defence minister Morten Bodskov said on Wednesday: “Our assessment is… that the breakage on the pipes is not an accident but a deliberate act.”

Experts expect navies from nearby countries will send teams with underwater drones to investigate, but say it could take a week or so before it’s calm enough to do so.

Four Ukrainian regions that held ‘referendums’ to be incorporated into Russia on Friday, says Kremlin
Hurricane Ian: Florida pummelled by one of the most powerful storms in US history