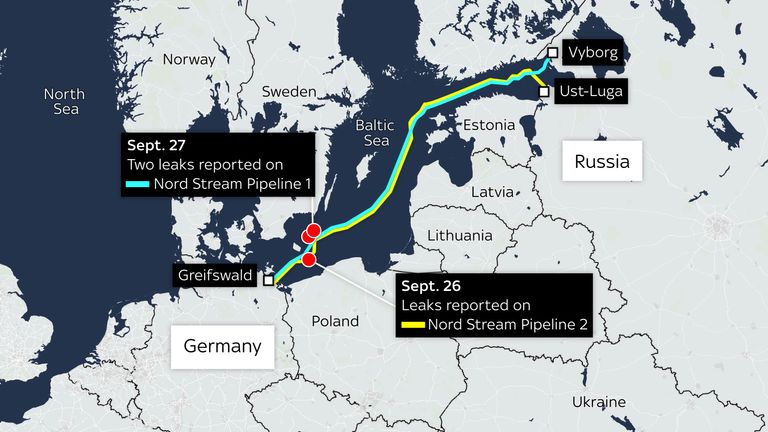 The EU has declared three leaks in two Russia-Germany gas pipelines to be the work of sabotage and suspicion has fallen on Russia.

Some commentators have suggested the leaks are linked to the Ukraine war, though the Kremlin has described the accusations it was behind them as “predictable” and “stupid”.

Here is what we know about what happened to Nord Stream 1 and 2, who could have been responsible and what’s being done about it.

What happened and where

On Monday morning, at around 2am local time, bubbles are thought to have started erupting on the surface of a section of the Baltic Sea between Sweden and Poland, about 14 miles (23km) southeast of Denmark’s Bornholm Island.

That morning, it was reported that pressure in the Nord Stream 2 pipeline had dropped overnight from 105 bars to 7 bars, indicating a leak.

The Nord Stream 2 pipe runs for 764 miles (1,230km) from Russia through the Baltic Sea to Germany and had been due to carry billions of cubic feet of gas to Europe until Russia invaded Ukraine and Germany refused to grant the pipeline’s operators a licence, leaving it mothballed.

Denmark scrambled military aircraft to look for signs of a leak and identified an area of disturbed sea, which they designated a danger to shipping.

The time of the leak was confirmed by readings taken by seismologists in neighbouring countries, who registered the equivalent of an earthquake magnitude of 1.8, which they triangulated to have occurred at almost exactly the same spot as the leak was bubbling to the surface.

About 17 hours after the Nord Stream 2 reading was taken, a second reading was recorded by seismologists northeast of Bornholm, indicating another incident.

Shortly after, Nord Stream AG, the operator of the Nord Stream 1, said it was looking into causes of a drop in pressure in the pipeline.

The following morning, Sweden’s Maritime Authority issued a warning of two leaks in the Nord Stream 1 pipeline in its and Danish waters, bringing the total number of leaks to three.

Nord Stream 1 follows a similar but not identical route from Russia to Germany and had been used to ship Russian gas to Europe since 2011, until the outbreak of the Ukraine war.

As Europe reeled from the Vladimir Putin’s invasion, it moved to reduce its reliance on gas from Russia, and simultaneously, flows through Nord Stream 1 to Europe from Russia decreased until no gas was flowing through the pipeline.

Footage from the scene taken from a Danish plane showed frothy seas, up to a kilometre wide.

What do the experts say

Initially, the European countries nearby were cautious, saying investigation was needed to find out what had happened.

The operator of the pipelines said the leaks were “unprecedented”, but did not have an explanation for them.

The Kremlin was quick to say sabotage could not be ruled out.

In the course of Tuesday, seismologists who had recorded the incidents said their analysis indicated the tremors had been caused by explosions.

Bjorn Lund, director of the Swedish National Seismic Network, said: “There’s no doubt, this is not an earthquake.”

By Wednesday, many politicians were adamant that the damage to the pipes was caused by human activity and deliberate, rather than because of earthquakes or accidental.

Danish defence minister Morten Bodskov said on Wednesday: “Our assessment is… that the breakage on the pipes is not an accident but a deliberate act.”

Very early on, suspicion fell on Russia. A number of commentators asked who would profit from such ruptures in the pipelines, noting how it had the potential to affect gas prices.

Ukraine blamed Russia immediately, with presidential adviser Myhailo Podolyak saying the leak was “a terrorist attack planned by Russia and an act of aggression towards the EU”, without offering any evidence.

Gas prices soared again on Monday, largely in reaction to a threat from Moscow to sanction Ukrainian energy firm Naftogaz, raising the possibility that one of the last functioning Russian gas supply routes to Europe would close down.

But many expressed disbelief that Russia would target infrastructure that carried gas that it had sold, threatening its future revenues. Kremlin spokesman Dmitry Peskov called such accusations “predictable and… stupid”.

Yet there has been much speculation that an attack by Russia on the pipelines could be a warning to the West not to escalate the Ukraine war further.

This is because the pipelines were not operational at the time and they supplied Russian gas, so would be less likely to be seen as a further significant provocation.

On Tuesday Poland’s President Andrzej Duda symbolically opened the valve of a yellow pipe belonging to the Baltic Pipe, a new system sending Norwegian gas across Denmark and the Baltic Sea to Poland, which he hailed as ending “Russian domination in the gas sphere”.

Some commentators have pointed out that while the gas leaks erupted in Denmark and Sweden’s Exclusive Economic Zones, they were outside their territorial waters, and therefore could be classed as having happened in international waters, making retaliation more complicated.

Others have cited the fact that there are significant networks of piping under the North Sea that could be vulnerable to attack. If the cause of the leaks is proven to have been an attack, it would reveal the ease with which undersea infrastructure can be targeted.

The method used by any potential saboteurs is far from clear. Russia has submarines which Western experts say are equipped to attack international internet cables, but there are suggestions the vessel was out of range at the time. Others say deep sea divers, travelling from the nearby Russian exclave of Kaliningrad, could have planted a device.

How will we find out

Experts say they expect that navies from surrounding countries will send teams with specialist experience into the area to carry out investigations.

Mr Bodskov said the Danish military had increased its presence within and around the area of Bornholm and they would be “doing everything within their power to get this clarified which is happening in close collaboration with our partners”.

But he said it may take some weeks.

“If you listen to the experts about how much gas there is the pipes and how long it will take before the pressure drops, then the reality is that might take a week, 14 days before it is calm enough in the area to actually see what has happened,” he added.

Any investigation is likely to look closely at damage to the pipes, which, at around 1,153mm in diameter with 34mm thick steel walls, surrounded by, in some cases, more than 110mm of concrete, would be difficult to crack.

Peter Faulding, one of the foremost British underwater forensic investigators, whose Specialist Group International has been involved in numerous undersea investigations carried out by UK police, said he expects the initial investigation to involve remotely operated vehicles (ROVs), which are also known as drones.

“People will be very wary about putting divers near it because… you’ve got a large amount of gas coming out,” he told Sky News.

“I would say they’d be using remote operated vehicles to go down. An ROV, because they have manipulators on the front. If there was any debris, the manipulator… can retrieve the evidence and an ROV will give crystal clear pictures without putting a diver in jeopardy.

“A lot them are autonomous now. They can send them down without a cable and they can actually pick things up off the sea bed.

“You would see what it was. If it was done with explosive, it will be very rough. There’ll be residues. There’d be fragments.“

“From that, they can carry out appropriate forensic tests to see what explosive it was, if an explosive has been used.”

Mr Faulding, who has previous military experience and carries out consultancy work for the energy industry, said once it was safe, because the pipelines are at a depth of about 70m, the navies would probably put down divers operating out of a diving bell, but they would have to breathe a special mixture and would work in a similar way to those who carry out work on undersea oil facilities.

He said it should not be difficult to work out which explosive, if any, had been used, but it would be extremely difficult, if not impossible, to work out who carried out an attack.

What are the consequences

In the immediate aftermath, European leaders expressed concern and said they would work to find out what had happened.

The gas markets remained volatile, but experts said that much of Tuesday’s volatility was due to fears that Russia would stop shipping gas through Ukraine, rather that because of the possibility of an attack on Nord Stream 1 or 2.

Nonetheless, experts said that the leaks had added to the uncertainty that has been fuelling much higher gas prices this year than in previous years.

Gas analyst Tom Marzec-Manser told Sky News: “The market opened bullishly yesterday in response to the Nord Stream stuff. But then it jumped significantly when that Ukraine development happened, when Gazprom threatened the sanctions. That actually was a larger wedge of the gains yesterday. But it’s definitely all part and parcel of the… loss of yet more Russian gas (being) the main driver to a 27% jump yesterday in wholesale prices.”

Despite doubts in the gas industry that any potential attacks could spread, Norway’s state oil company, Equinor, said it would raise its level of preparedness.

The alert was raised overnight and applies to all of Equinor’s facilities.

Norway is a major producer of offshore oil and gas and its energy exports have surged as European countries scramble to find alternatives to Russian energy supplies.

Norwegian Prime Minister Jonas Gahr Store said: “We are concerned with taking good care of the safety of our own oil and gas installations, and we have stepped up the state of preparedness regarding them today.”

Royal Norwegian Navy officer Lieutenant Commander Tor Ivar Strommen warned that there could be attacks on Norwegian energy exports “in the next half year”.

NATO and the European Union stressed the need to protect critical infrastructure and warned of a “robust and united response” should there be more attacks.

Mr Strommen told Reuters: “The Norwegian government has to realise that by far the most important strategic object in all of Europe now is the energy or gas imports from Norway.

“If those deliveries should be cut or stopped or reduced by a large amount, this would cause a complete energy crisis in Europe.”