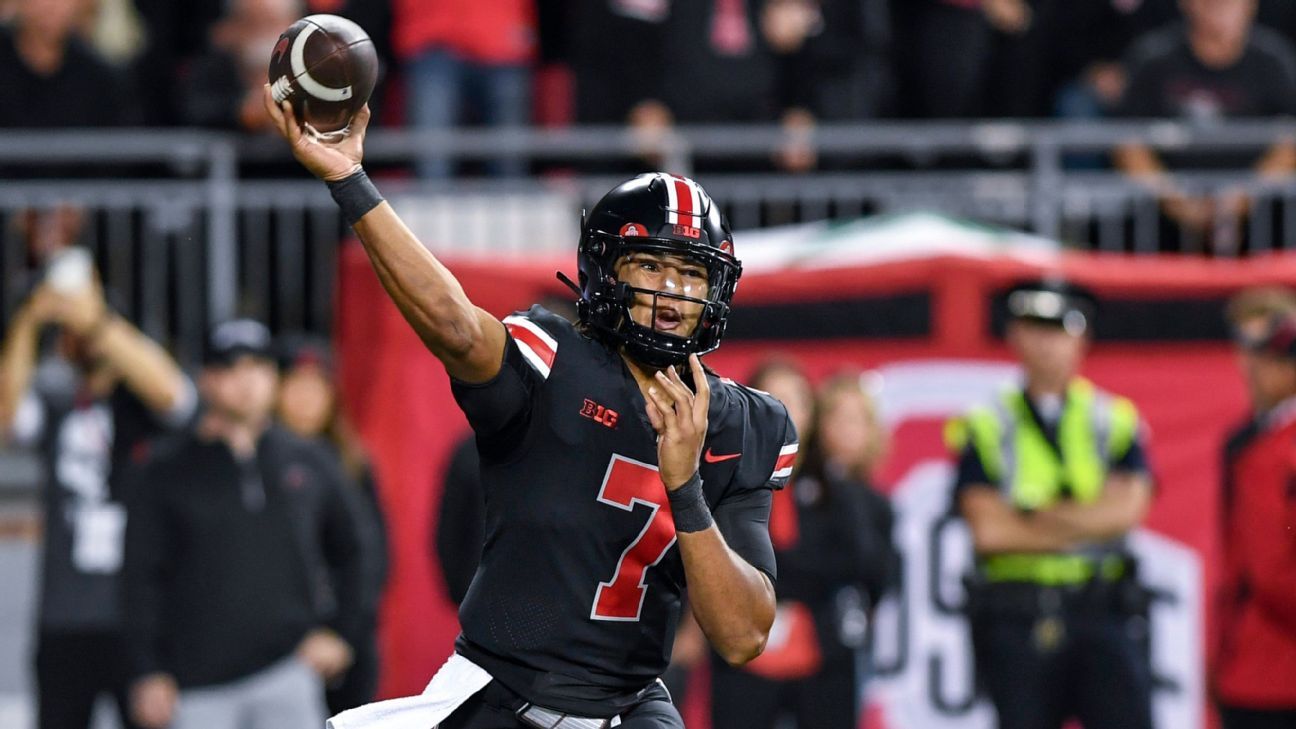 Four weeks into the college football season, and we’re officially on Heisman Watch for the 2022 season as September comes to a close. From a surprise campaign in Lawrence, Kansas, to a couple of strong cases in Tuscaloosa, we’re dialed in.

You’ll see our Heisman standings, top Heisman moments of September, what to watch for in Week 5, plus a Q&A with Kansas QB Jalon Daniels.

Voting methodology: 15 voters ranked their top five candidates, with five points for a first-place vote down to one point for a fifth-place vote.

Notable: Stroud finished 22-of-27 for 367 yards and five touchdowns in a win against Toledo on Sept. 17. He has thrown for four-plus touchdowns in three of the Buckeyes’ four games and ranks second in QBR at 95.4.

Notable: Speaking of QBR, Daniels currently leads the nation at 98.0. He threw for 324 yards and four touchdowns in the Jayhawks’ 35-27 win against Duke on Sept. 24. He also added 83 yards and a touchdown on the ground while guiding Kansas to a 4-0 start to the season.

Notable: Young put together his most complete performance on Sept. 24 against Vanderbilt. The 2021 Heisman Trophy winner threw for 385 yards and four touchdowns on 25-of-36 passing. Young hasn’t matched his output from last season quite yet, but with SEC play here, it looks like his stats are starting to pop again.

Notable: Despite being one of the toughest tight ends to cover in the passing game, Bowers has done a lot of his damage on the ground. Bowers rushed for 77 yards and two touchdowns on just two carries in Georgia’s 39-22 win over Kent State on Sept. 24. He has three rushing touchdowns this season and two more through the air.

Notable: Much like Young, Anderson had his best game once SEC play began. The 2021 winner of the Bronko Nagurski Trophy recorded 2.5 sacks and five total tackles in Alabama’s win over Vanderbilt. The sacks brought his total 4.5 this season.

Following Kansas’ 35-27 win over Duke in Lawrence, ESPN’s Andrea Adelson sat down with Daniels to talk about the Heisman.

ESPN: Who is your favorite Heisman winner?

JD: Tim Tebow, because he was able to run a lot when he was at Florida. He made a lot of things happen, especially for how young he was at quarterback. My second would have to be Bryce Young, because he’s from California as well, and we’re basically in the same grade, same age. You’ve got to have support for those California ties.

ESPN: What do you remember about watching Tebow play?

JD: Just seeing the amount of athletic ability that he has, being able to extend plays, being able to get out of the pocket and run if he can. He was always somebody who was able to get the ball downfield if he had to. He’s somebody I modeled my game after. I actually got the chance to meet Tim Tebow at the NIL summit in Atlanta this past summer.

ESPN: Is the Heisman something that you have thought about either before this season, or when you got to Kansas?

ESPN: When did it start to become real for you?

JD: I would say this past week. A lot of my teammates, a lot of my family started hitting me up and saying, Heisman this, Heisman, that and I’m just like, “Wow.” Just last year, my name was nowhere near this conversation. Just being able to see the amount of growth in that path is just amazing.

ESPN: If you were to make it to New York, what would be No. 1 on your list that you had to see?

ESPN: What would you say was the lowest point of your career at Kansas?

JD: Definitely my freshman year. We went 0-9, and as a freshman that’s actually playing on the field, it can definitely mess with your head a lot. It starts to make you think, if you’re good enough to even be in this position at all. Also, I’m from L.A., so being in Kansas away from all of my family was hard. In all the hard times I’ve had in my career, I’m usually able to just go back home, be able to talk to my mom, talk to my dad and I usually wake up in a way better mood the next morning. But being away from home, it definitely wasn’t the easiest.

ESPN: When did you have an idea that this season could be special?

Top Heisman moments of the season

1. Everyone knows that Brock Bowers is a threat in the passing game, but he’s proved that he might be a dual-threat tight end this season.

Brock Bowers takes the handoff and scores to put the Bulldogs up 7-0.

2. With only 1:29, left on the clock, Bryce Young methodically leads the Alabama offense down the field for a comeback win against Texas.

Bryce Young escapes the blitz for a big first down, leading to Alabama’s game-winning field goal.

3. Down 10-7 at the half to Notre Dame, C.J. Stroud threw a second-half touchdown and led a 7-minute-long drive to close out the game for the Buckeyes.

C.J. Stroud takes a hit, but still is able to deliver a 24-yard touchdown to Xavier Johnson.

Heisman game of the week

With two players in the top five, Alabama will be in the running for Heisman game of the week. A road game at Arkansas poses a threat for both Young and Anderson, however. Anderson will have to try to slow down KJ Jefferson and the Razorback offense while Young will face an Arkansas defense that has only allowed more than 28 points once this season.

A&M loses top WR Smith to season-ending injury
Clemson and USC survived, but not everyone made it out of Week 4 unscathed