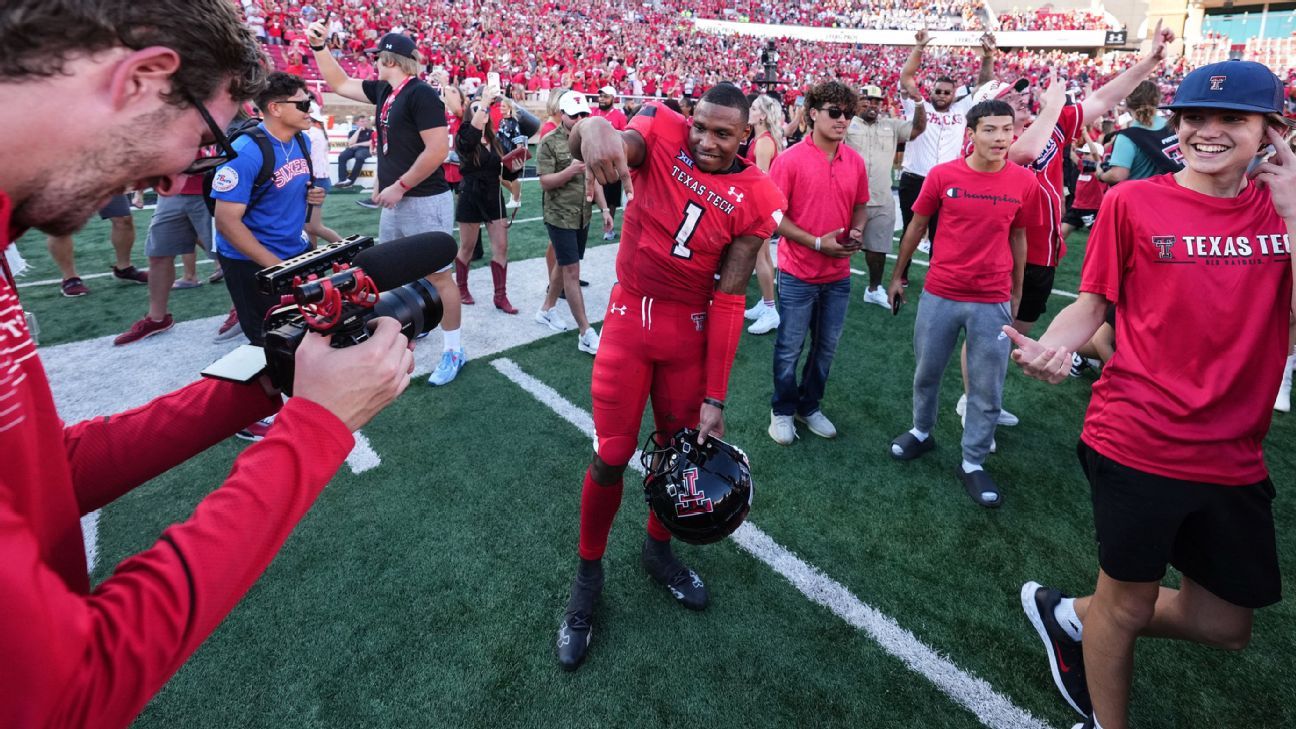 ARLINGTON, Texas — On a September Saturday in 2022, the Southwest Conference had itself a weekend. In Dallas, SMU had a record crowd on hand to greet the traitor Sonny Dykes, who had jumped ship to rival TCU, only to watch the Horned Frogs come away with the Iron Skillet in their 101st meeting.

Just 24 miles away, Texas A&M knocked off a top-10 Arkansas in their 79th two-step together, in a weird, tense game that typifies their matchups since their old rivalry resumed at AT&T Stadium in Arlington. And in Lubbock, another 336 or so miles from Arlington, Texas Tech upset No. 22 Texas in front of the Red Raiders’ first sellout crowd since 2018, and many of the 60,975 in attendance flooded the field in the aftermath.

Now, the SWC hasn’t existed since 1996, but the passion will never die, despite attempts to kill it. On one Saturday in Texas, there were three games with three packed stadiums amid an attendance crisis for administrators at many schools, a reminder that sometimes it’s more fun to play someone with a little extra hate on the line.

Since the SWC’s breakup, TCU has played in four conferences (WAC, Conference USA, Mountain West and now, the Big 12) while SMU was aligned in the WAC and CUSA before landing in the American. Still, despite their nomadic journeys in search of future relevance, they’ve managed to maintain a regional rivalry for more than a century.

“I think it makes sense for teams that are close to each other to play each other,” Dykes said two weeks ago when the drumbeat started for his return to Dallas. “You know, that’s why it makes so much sense for USC to be in the Big Ten … they’re right there next to each other.”

Dykes’ sarcasm comes at a time when realignment continues to pull at the strings of college football’s fabric, breaking up long-standing rivalries and making it harder for fans to get to, or even care about, games. The Iron Skillet — once so celebrated that legendary sportswriter Grantland Rice called the 1935 edition the “Game of the Century” — has no guarantee of continuing past 2024 when the current contract ends.

As leagues go to more conference games and athletic budgets are determined by home games, Power 5 teams like TCU don’t often make trips to Group of 5 schools, so TCU might opt to ditch playing in Dallas every other year, when it could schedule another home game. Oklahoma and Oklahoma State have already made it clear Bedlam will not continue when the Sooners leave for the SEC, just like the Texas A&M-Texas rivalry has been dormant since the Aggies headed Southeast.

Texas Tech’s upset this weekend came in what very well could be Texas’ last trip to Lubbock with the Longhorns’ impending SEC move, likely ending a series that has been played 72 times.

Dykes understood the appeal of his return, saying “I’d boo me too” in the week before the game. It was a boon for SMU, with the Mustangs selling more than 35,000 tickets at a place that has struggled to draw big crowds. And while the stadium never quite filled in part due to the searing heat, the middle of SMU’s campus which was packed with tailgaters along the Boulevard.

“The energy, the excitement, you just can’t replicate that,” said Rogge Dunn, an attorney and SMU fan. “We’re not in the Big 12. We’re not in the Southwest Conference. All our traditional rivals are gone. It’s hard to get up for UAB or East Carolina. The great thing about this rivalry is it’s so close.”

Down the Boulevard, at a tent selling red shirts with “TCU SUCKS” on them, Chipper Haynes, a 2003 SMU grad, lamented the possible demise of a game that’s circled on his calendar every year.

“It means everything to us,” Haynes said. “That’s probably what breaks my heart the most about the big realignment stuff is you lose these huge rivalries. We’ve made these shirts for the last 20 years. The idea that we might not play TCU coming up because of realignment and everything going on, it sucks. It takes part of the spirit of college football away.”

Dykes agreed, saying in his postgame news conference he knew the fans would be up for his return and give him their best shot.

“I thought that stuff off the field was college football,” Dykes said. “That’s why this game was well-attended. That’s why Kansas is sold out today. That’s why Texas A&M-Arkansas is sold out at JerryWorld [it wasn’t a sellout, but 63,580 was the largest crowd for the game since 2017], that’s why we’re sold out next week. Because it’s just so exciting. It’s great for the fans. Sometimes it’s hard to be the brunt of some of that. But you’ve got a job to do.”

He said he was happy to get this week behind him, but that he was able to focus on the game and not the emotion around it.

“I’m 52 years old. … If I can’t do that, I need to go work for Ricky Chicken over at Chicken Express,” he said, in a reference to fast-food chicken magnate Ricky Stuart II, a TCU trustee.

At Jerry Jones’ house in Arlington, as Dykes mentioned, the Aggies and Razorbacks met in a series that ended in 1991 when the Hogs left the SWC for the SEC, then returned as a neutral-site game in 2009. Both schools are eager to get the series back on campus starting in 2025 now that it has become a heated conference game with the potential to sell lots of tickets.

While the Aggies and the Hogs never had the hate for each other that they each had for the Longhorns before the end of the SWC, their SEC era has been inflamed by their proximity as Arkansas’ enrollment has grown. In 2021, 6,720 of Arkansas’ 24,265 undergraduate students were Texans.

Texas A&M grad Tommy Shiflett and his daughter Logan, one of those Texans who is a freshman at Arkansas, walked the concourse Saturday together with their split allegiances on their shirts.

“It’s a bigger rivalry now because she had 12 months of talking noise to me, and I need it back,” Shiflett said in reference to the Razorbacks ending the Aggies’ nine-game winning streak in the series last year. “I need to be able to run my mouth a little bit. That’s why there’s just the two of us here. The rest of the family isn’t here.”

Logan, for her part, couldn’t handle the Aggies having the lead. “I can’t do this right now,” she said, with a laugh.

Yet, even as a newcomer, Logan agreed that rivalries are fun. Arkansas fans even booed a dog — Texas A&M’s mascot, Reveille — when she was shown on Jerry Jones’ giant video screen. And still, all the Ags and Hogs in the place could come together as one when the highlights from Texas’ loss to Texas Tech got the big-screen treatment, leading to one of the biggest cheers of the night.

In places like Texas, where rivalries that go back more than 100 years are in danger of being lost — if they’re not already — there’s more at stake than just wins and losses. Houston and Rice met for the 44th time Saturday for the Bayou Bucket, another crosstown rivalry that is scheduled only through 2023 and might not continue with Houston moving to the Big 12.

“In the state of Texas, you want to be No. 1,” said Drew Hogan, a TCU fan at the SMU game. “It doesn’t matter what game it is, who it is, you want to win for bragging rights at dinner.”

John Jenkins, the flamboyant coach who was best known for beating SMU 95-21 while with Houston in 1989, the Mustangs’ first season back from the NCAA “death penalty,” grew up in the Panhandle of Texas, coached at every level in the state and was in attendance for the Aggies’ win over his alma mater, Arkansas.

“Playing my high school ball in Texas, coaching high school football in Texas right on up through the college ranks and pro football, it means everything to me, with the attached rivalries that you’ve had in this state,” Jenkins said. “To see this thing get splintered and fragmented just really hurts. It’s ridiculous. Doesn’t matter, doesn’t make a damn about rivalries or football strength. It’s all about media markets.”

As the Big Ten grabs USC and UCLA to get those elusive markets, followed by whatever comes next in the realignment derby, there will be more tradition lost.

“I realize that with some of the megaconferences now, they’re gonna have fewer nonconference games,” Dunn said. “But there’s still room for these games. They may have other agendas, but this is what the fans want.”

Even new die-hards who didn’t grow up with the sport, like Tony Simulik, a Canadian from Ottawa who was drawn to college football’s passion, are concerned about the future.

Simulik travels to SEC country each year to take in big games. He came to Arlington hoping to see the Aggies and Hogs play in the Cowboys’ stadium, saying “it was just an astonishing experience.”

“It’s like cultural history,” he said. “It’s iconic. The fans, the chants, the singing, the activity. That’s already worth the price of admission just to see that and feel that in that stadium. It’s the atmosphere. I’ve often thought at times the game is almost anticlimactic.”

Almost, but not quite, for the tens of thousands of fans who celebrated victories over longtime rivals and, in some cases, wondered if they’d be able to do so again.