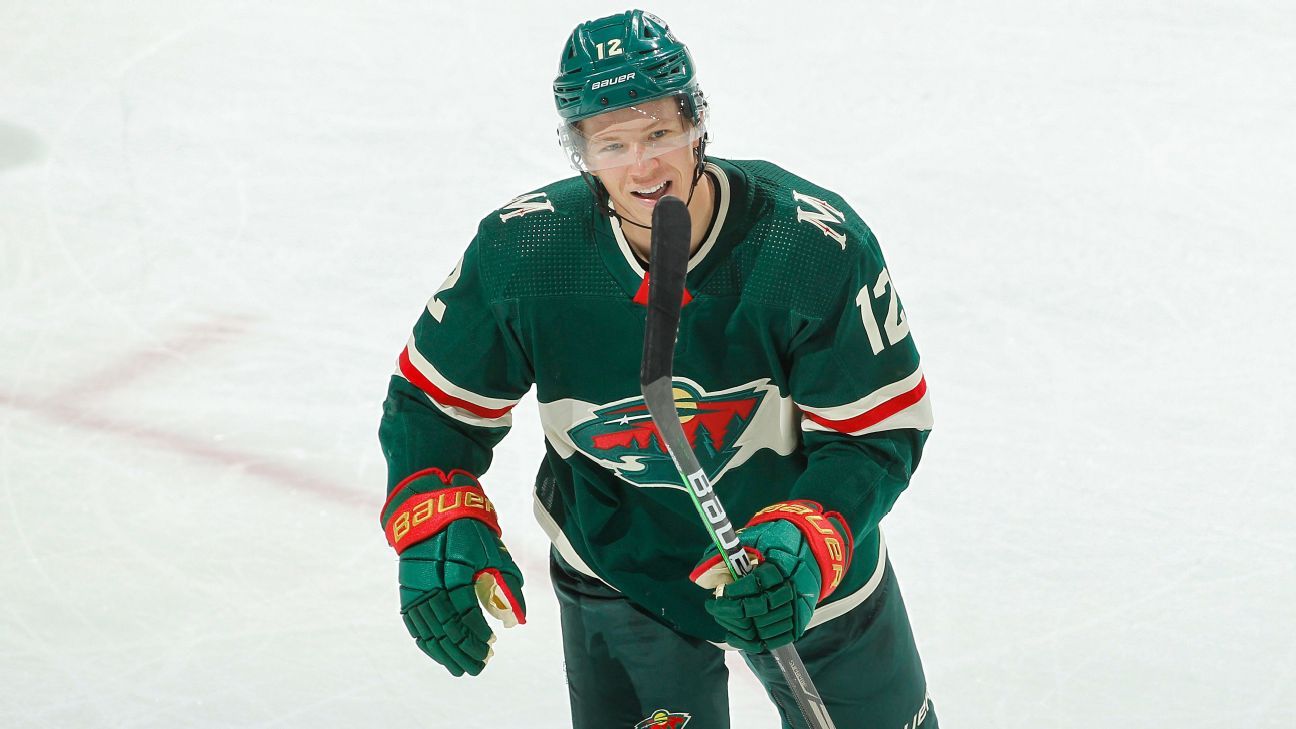 MATT BOLDY LOVES playing hockey in Minnesota. The way the community supports the sport at all levels. The thousands of fans who watch the Minnesota Wild in warm-ups. And, if he’s being honest, the level of celebrity an NHL player can attain after just 47 games in the show.

“It’s crazy. Everyone’s a huge fan,” the 21-year-old told ESPN. “Can’t really go anywhere without getting recognized, which is pretty cool in a lot of ways.”

Of course, scoring 39 points in those 47 games can get one noticed. Being the rookie who helped power the Wild to their most successful regular season in franchise history will earn that recognition.

Marco Rossi watched from afar as Boldy, who was his linemate with the AHL Iowa Wild, lived the NHL dream. They’re both first-round draft picks and among the best young forward prospects in the league. Boldy was called up to contribute to the Wild while Rossi was getting his reps in the AHL, one year after COVID-19 complications nearly derailed his career.

Was it inspiring? Like, if Boldy could do that in the NHL, could Rossi do that?

“Yeah, of course,” Rossi said with a laugh. “But I don’t really like to focus too much about that.”

Rossi, 20, played two games with the Wild last season and hopes to play many more.

“Every hockey player dreams, like since day one, to play hockey one day in the NHL. That’s the best league in the world,” Rossi said. “It would mean a lot for me, but I know nobody’s gonna give it to me. You have to earn that spot.”

Boldy and Rossi are part of the wave of young players who have populated the Minnesota roster in recent seasons. Joel Eriksson Ek is 26. Jordan Greenway is 25. So is Kirill Kaprizov, the franchise’s biggest star and the face of that youth movement. One of the catalysts for the Wild’s recent success is striking that balance every NHL team seeks to strike: Talented kids meshing with productive veterans such as Mats Zuccarello, Ryan Hartman and the majority of their defense corps.

“We’ve got a good balance. I think part of the beauty of it is that the older guys embrace the youth,” general manager Bill Guerin said. “They’re excited to have Boldy on the team. They’re excited about Marco. They’re excited to see Greenway and Ek take steps in their careers. They’re not threatened by them at all. They want them to be good and they help them. They just want to win. And they realize we all need each other to do that.”

Now it’s up to Boldy and Rossi to reward that excitement.

“One hundred percent,” the Wild GM said with a laugh.

Boldy was drafted 12th overall in 2019 as a highly skilled winger from the U.S. National Team Development Program. It was a banner year for that program, which produced Boldy, first overall pick Jack Hughes, Trevor Zegras and Cole Caufield, among others in that draft class.

He spent two seasons at Boston College, earning a spot in the final 10 for the Hobey Baker Award as a sophomore. He joined the Wild organization in March 2021 and was hyped as being part of that young wave of talented forwards set to power the roster.

“It’s so cool, honestly, just to be considered in that category with Kirill, watching him every day,” Boldy said. “You look up to those guys. You want to be as good as Kirill. You soak up everything they have to say. But you gotta go out there and earn that. It’s about going up there and earning your way into that spot.”

Last season, Boldy earned a valuable spot in the Wild lineup: playing the vast majority of his minutes with Kevin Fiala, the forward who posted 33 goals and 85 points. He won’t have the same luxury this season. Fiala was traded to the Los Angeles Kings; his next contract was going to be too rich for the Wild’s salary-cap situation.

“Kev’s awesome. I mean, I’d be lying to you if I said I wasn’t a little bit disappointed seeing him go,” Boldy said. “I get it. There’s a lot of business to hockey too. But he’s an awesome player. He’s an awesome teammate. So it’s tough to see him go, but that’s kind of the nature of the game. You gotta find different ways to score and build chemistry with different players. And we got plenty of players on our team that are really good and that can hopefully make me a better player.”

Guerin scoffed at the idea that Boldy might be negatively impacted by Fiala’s departure.

“I’m not worried at all. Kevin’s a good player,” Guerin said. “Look, I’m sure that Colorado would love to have [Nazem] Kadri back. I’m sure Calgary wanted [Johnny] Gaudreau and [Matthew] Tkachuk back. You lose good players. That’s what happens.

“Matt Boldy’s going to be fine. As much as Kevin helped him, he helped Kevin.”

What Guerin is more concerned about is how Boldy adjusts to his opponents’ adjustments.

“The thing about these second-year players is that you’re not a secret anymore. Everyone knows how good you are,” Guerin said. “A veteran defenseman knows that if he doesn’t play Matt Boldy hard, he’s going to get burned. Sometimes that takes a second for a second-year forward to learn. It’s like, ‘Hey, these guys are playing me differently.’ And it’s like, yeah, because you’re good.”

MARCO ROSSI DOESN’T want to be defined by COVID-19. That much is clear.

“We don’t try to think too much about what happened like last year,” he said. “I focus and think more in the future than the past right now.”

Rossi left Wild training camp in February 2021 because of complications from COVID-19, for which he had tested positive the previous November. Rossi was diagnosed with myocarditis, an inflammation of the heart muscle. He returned to Austria to recover with family and resumed training in June 2021. He played 63 games in the AHL along with his brief stint with the Wild in January.

“The hardest part was to stay patient. It’s not gonna be done in two weeks or something like that,” he said. “After the recovery time, you gotta come back to training and try to get better and that’s not easy.”

Rossi said that in the beginning of his comeback, he worried too much about his heart. Was it really healthy? He’d feel something in his chest during training and worry. It took a while for him to fully believe that he was 100 percent as the doctors were telling him.

“Health-wise, it was a scare. But he’s come back from it. He’s healthy,” Guerin said.

Rossi was drafted No. 9 overall in 2020 by the Wild as a dynamic offensive center for the OHL Ottawa 67’s. Born in Austria, Rossi remembers navigating through some cultural differences in North America. Like, for example, the affinity for one of his favorite sports.

“Three years ago, I was talking in Ottawa that I like to watch Formula One,” he recalled. “Not many guys knew what that really was or how it worked.”

“They promote it so good right now,” Rossi said. “I mean, with the Netflix show, it’s now something that so many people watch.”

Rossi has his engine primed for the NHL but doesn’t know if he’s in the race yet. The expectation is that he’ll make the leap to the main roster, but both Guerin and Rossi said that’s contingent on a strong training camp.

“I think he’ll do very well. He’s a smart kid. He analyzes where he’s at. There’s no secret to his work ethic and his competitiveness,” Guerin said. “I think his game will transition well, but he has to do it right off the hop. He has gotta come in and prove himself.”

Boldy, his friend and potential linemate, thinks he will.

“He can play,” Boldy said, laughing. “I think he’s just a really, really good skater. Really good on his edges. He’s got a lot of speed. He’s smart and scores goals. He can pass. He’s kind of got it all. He’s definitely got every tool that you need to be successful.”

The Wild have the tools now, too, thanks to this balance between established talents and emerging ones such as Boldy and Rossi.