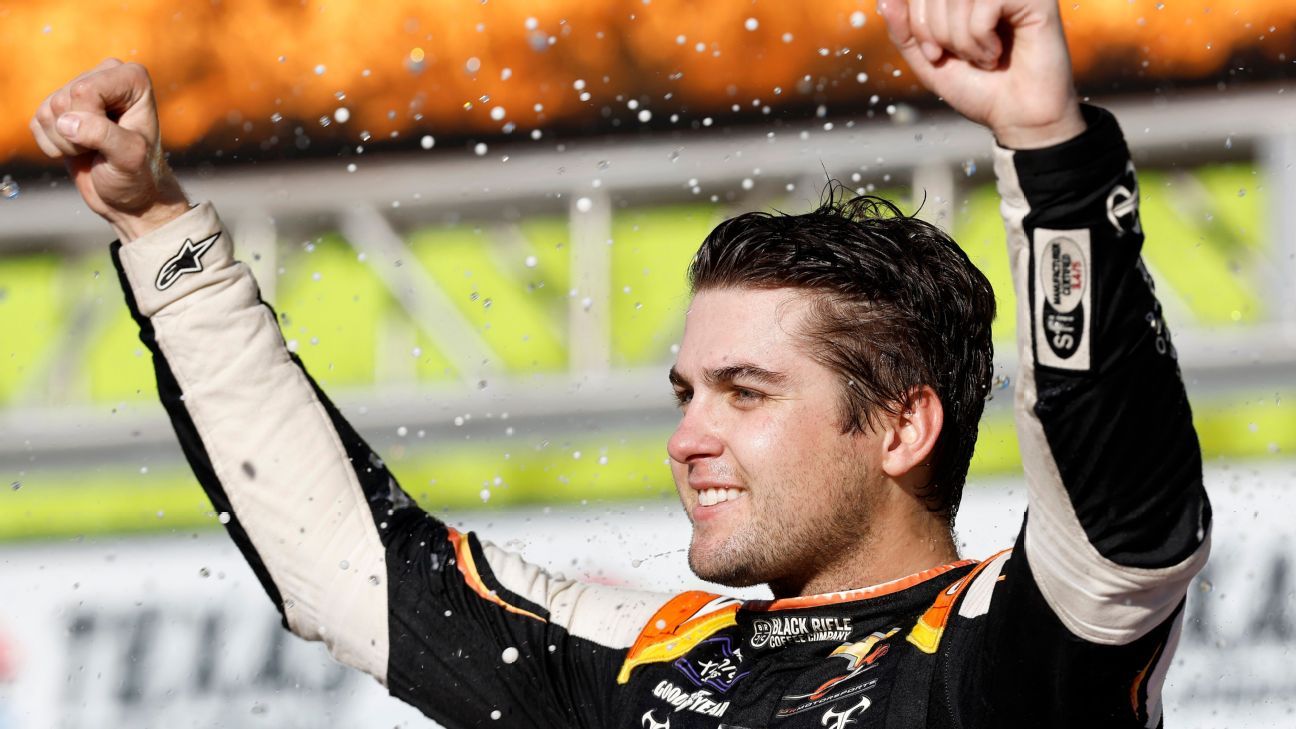 FORT WORTH, Texas — Noah Gragson opened the NASCAR Xfinity playoffs by becoming the first driver in 39 years to win four races in a row, going to Victory Lane at Texas Motor Speedway on Saturday after being just in front of a massive wreck that took out three playoff contenders.

“What a way to start off the playoffs on a high note,” Gragson said. “Just very excited, and very confident right now.”

The victory for Gragson in the No. 9 Chevrolet for JR Motorsports locked up the first spot in the round of eight, with two more races to determine the other seven drivers that will advance with him. The Xfinity playoffs begin with 12 drivers, instead of 16 like the Cup Series, so its postseason is one round shorter.

The top six finishers were all playoff contenders with Austin Hill the runner-up in his Chevy and a spot ahead of Ty Gibbs, who came back from the back of the field after after having to start there because of unapproved adjustments on the No. 54 Joe Gibbs Racing Toyota. Stage two winner AJ Allmendinger, Riley Herbst and JR Motorsports driver Josh Berry rounded out the top six.

Sam Ard is the only other series driver to win four consecutive races. He did it in 1983, the second year of the NASCAR’s second-level circuit, while winning five of the last six races in the season that he had 10 wins overall.

It was the seventh win for Gragson, who had already had the single-season record for most wins by a JR Motorsports driver. He has 12 career victories, and next year is moving into the No. 42 for Petty GMS in the Cup Series.

“The wins are cool, but really for me it’s the memories we’re making with the people,” Gragson said. “It’s kind of sad it’s coming to an end. I love everybody over there. … Good time to be making memories.”

Gragson was out in front on a restart with 84 laps left, and it was virtually four-wide coming out of Turn 1 into the corner, with Sheldon Creed low on the inside of the leader, and his JR Motorsports teammate Justin Allgaier and John Hunter Nemechek on the outside.

Nemechek, the winner at Texas last fall but not in playoff contention, got loose and collected Allgaier to start a chain-reaction wreck. Defending Xfinity champion Daniel Hemric, the stage one winner, and polesitter Brandon Jones were the other playoff drivers that got caught up in the fracas.

“I was three-wide at the top being able to be in the race and I think we ended up four-wide at one point which doesn’t really work aero-wide in the pack,” Nemechek said. “I thought we were going to have a shot to win the race and repeat from last year. It didn’t work out.”

Jones felt Nemechek, his teammate at Joe Gibbs Racing, may have pushed too hard there.

“Nothing to fault him there for, but probably a little early to be going that far,” Jones said. “It is what it is.”

Allmendinger is second in the playoff standings, 47 points behind Gragson. Gibbs, Hill, Berry, Allgaier, Sam Mayer and Ryan Sieg round out the top eight. Herbst, Hemric, Jones and Jeremy Clements are outside the top eight.