Vladimir Putin is expected to deliver a national address later – his first since he ordered his troops into Ukraine in February.

There had been speculation in Russian news media that he would speak to Russians on Tuesday evening but this did not happen, and no reason was given.

It comes after separatist leaders in four Russian-occupied regions in eastern Ukraine announced plans to hold referendums on joining Russia later this week.

Mr Putin is expected to defend the move, which would pave the way for the formal annexation of swathes of territory after nearly seven months of war.

The self-styled Donetsk (DPR) and the Luhansk People’s Republics (LPR), which Mr Putin recognised as independent states just before the invasion on 24 February, have both said they will hold referendums beginning this Friday and until Tuesday.

The Kherson and Zaporizhzhia regions, which have yet to be recognised as independent states by Russia, have also said they will hold votes of their own.

Ukrainian President Volodymyr Zelenskyy said the situation clearly showed his country had the initiative in the conflict, adding that “noisy news from Russia” would not change Ukraine’s position. 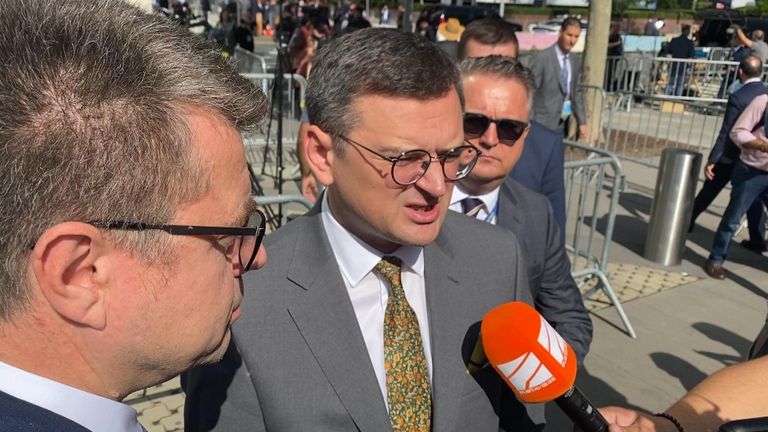 ‘Referendums are an act of desperation from Russians’

The White House said the US will reject the plans to hold referendums, while Ukraine dismissed the move as a stunt by Moscow to try to reclaim the initiative after crushing losses on the battlefield.

And French President Emmanuel Macron said the referendums will not be recognised by the international community.

NATO chief Jens Stoltenberg tweeted: “Sham referendums have no legitimacy and do not change the nature of Russia’s war of aggression against Ukraine. This is a further escalation in Putin’s war. The international community must condemn this blatant violation of international law and step up support for Ukraine.”

Moscow does not fully control any of the four regions, with only around 60% of Donetsk region in Russian hands, but if it goes ahead with the referendums and joins all four to Russia then Ukraine – and potentially its Western backers too – would, from a Russian perspective, be fighting against Russia itself.

That would raise the risk of a direct military confrontation between Russia and the NATO military alliance, a scenario US President Joe Biden has said could lead to World War Three, because NATO-members are supplying arms and giving intelligence to Ukraine.

Commentators have agreed the move could escalate Moscow’s stand-off with the West as it comes after recent territorial gains made by Ukrainian forces, pushed Russian troops very much onto the back foot.

The world has been waiting as Mr Putin has pondered his next steps following the bruising pushbacks.

Analysis: Russia makes new stand after being thrown back by rapid Ukrainian offensive 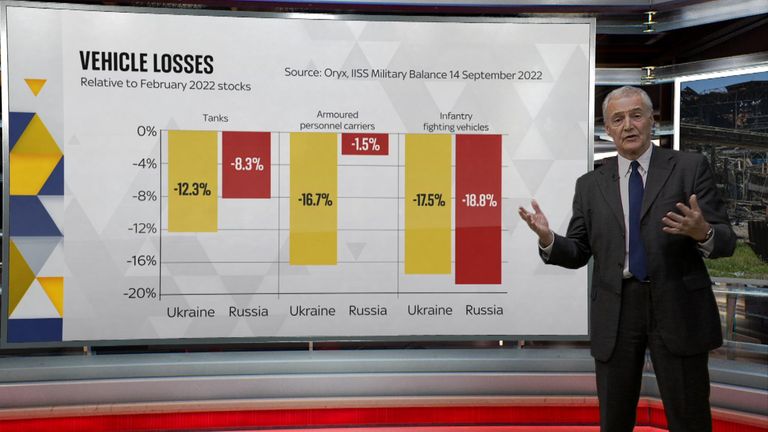 What is Russia’s next military step

Ukraine said the threat of referendums was “naive blackmail” and a sign Russia was running scared.

“This is what the fear of defeat looks like. The enemy is afraid, and obfuscates primitively,” said Mr Zelenskyy’s chief of staff Andriy Yermak.

Dmitry Medvedev, a former Russian president who is currently deputy chairman of its Security Council, suggested the outcome of any referendums would be irreversible.

The territory Russia currently controls in Ukraine amounts to more than 90,000 square km, or about 15% of the country’s total area – equal to the size of Hungary or Portugal.

Russia annexed Crimea in 2014. With Crimea and the territory in the four other regions, Russia would gain an area of around 120,000 square km, about the same size as the US state of Pennsylvania. England is around 130,000 sq km.

Putin calls up 300,000 reserve troops to Ukraine – as he warns West over Russia’s nuclear weapons
Ukrainian collaborators tortured me for Russia, father says

Hurricane Ian: An entire seafront levelled – no one expected this storm to be so vicious and so damaging