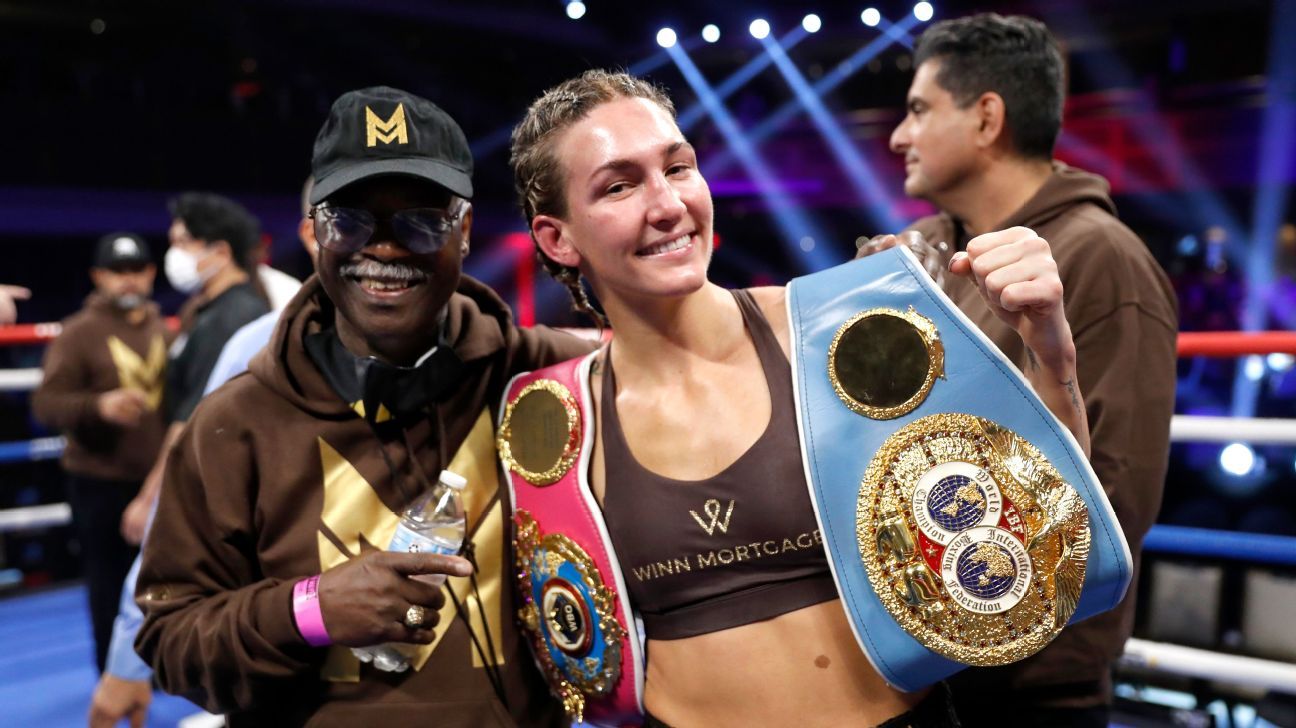 In conversations with Mikaela Mayer over the years, one of the constant themes that has come up has been an element of starting something.

Beginning something for herself and setting things up for those who follow her once she’s done boxing. It’s part of the deal when you’re in a burgeoning sport, when you’ve seen how difficult things can be and what the possibility of a future is.

Which is why what Mayer, Alycia Baumgardner, Claressa Shields and Savannah Marshall decided to do Sept. 10 at London’s O2 Arena could end up being incredibly important. Mayer and Baumgardner’s agreement to be the co-main event under Shields-Marshall turned what would have been two intriguing separate fight nights into a showcase event.

When Katie Taylor and Amanda Serrano fought in a sold-out Madison Square Garden on April 30 in a landmark night for women in boxing, there were questions of whether it would be a one-off. Of whether there could be tangible momentum based off Taylor-Serrano, or if it would be one big moment for women’s boxing followed once again by an unfortunate retreat into the background.

Mayer-Baumgardner and Shields-Marshall should eliminate those questions in their entirety.

Putting Shields-Marshall and Mayer-Baumgardner on the same card in London is not only intelligent from a marketing, television and ticket sales perspective, but it’s also good for the sport in general. It creates buzz. Creates attention.

Throughout 2022, women in boxing have delivered fights that can garner the most attention, and three of the best fights the sport can make are happening within six months of one another.

That’s a big deal for a sport trying to grow. Trying to take a toehold on the public consciousness and turn it into a foothold so next year it can be even more of a secure grasp.

There’s little question the Taylor-Serrano fight, at minimum, lived up to expectations in April if not exceeded them, from the quality of the fight to the intensity of the crowd. If Shields-Marshall and Mayer-Baumgardner can build on that, it could create yet another step forward for a side of the sport that’s seen significant growth in public recognition over the past 36 months.

There’s a difference between Taylor-Serrano and the two Sept. 10 fights. In Taylor-Serrano, there was a clear level of mutual respect and little-to-no trash talk between the two. It was simply two fighters considered the best in the world finally getting together after years of stops-and-starts.

With Shields-Marshall and Mayer-Baumgardner, there is legitimate dislike — not just the create-a-narrative-for-a-fight dislike but the active mutual loathing that sometimes can create spectacular moments in the sport.

Shields and Marshall go back to when Marshall became the only fighter to defeat Shields in boxing as an amateur or a professional back at the preliminaries of the AIBA World Championships in 2012. Once Marshall and Shields both turned pro and both showed promise as professional fighters, this became an inevitable fight to make.

That both of them have been open about their animosity on social media has only made it more enticing.

For Mayer-Baumgardner, the start of the feud is not quite as obvious since the two have never fought before. But for months, really ever since Baumgardner knocked out Terri Harper to win the WBC belt in 2021, they’ve had a very real social media feud. Mayer and Baumgardner let the world know through Twitter and Instagram they did not like each other.

But instead of the two fighters letting this drag on for years and years until an unsatisfying resolution far too late in their careers, they decided the time was right and will meet in the ring in September to unify Mayer’s WBO and IBF and Baumgardner’s WBC junior lightweight titles.

It’s just another example of female fighters realizing what a big-time fight is, realizing they can sell said fight and that there is money to be made off it, and then executing it without the long delay we’ve often seen on the men’s side of things, with Floyd Mayweather-Manny Pacquiao and the third Canelo Alvarez-Gennadiy Golovkin fight as examples.

With Mayer-Baumgardner and Shields-Marshall, women’s boxing has a real chance to take what April brought and what September has the potential to bring and use it to create a lasting change for the future of women in the sport.