Drugs giants Pfizer and AstraZeneca have rejected an NHS claim that the UK is facing a COVID-19 vaccine shortage, insisting there is no threat to supplies.

The two leading vaccine manufacturers both said they remain on course to meet their delivery commitments and denied they were facing disruption in supplies.

Their defiant statements appeared to contradict a letter to vaccination centres from NHS England warning there will be a “significant reduction” in supplies next month.

The jabs crisis coincided with a threat by the European Commission president Ursula von der Leyen to block vaccine exports to the UK, where 25 million adults have now had their first jab.

Sources have told Sky News that one reason for the number of doses delivered varying over time is batches requiring further testing to ensure the highest safety standards are met in every case.

Jab sites in England have now been ordered to stop vaccinating people under 50 during April, a move that has prompted Tory MPs to fear it could cause a delay in easing lockdown measures.

The vaccine manufacturers hit out after Health Secretary Matt Hancock said at a Downing Street news conference that supply was “always lumpy” and the NHS England warning was “par for the course”. 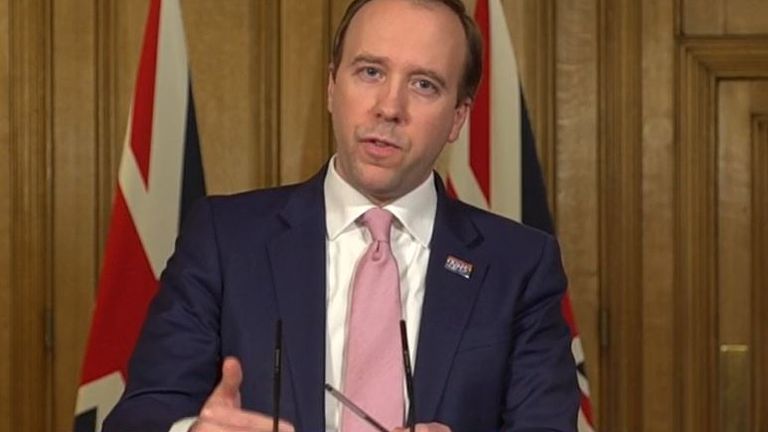 In a terse statement, Pfizer said: “We have an agreement with the government to supply 40 million doses of the Pfizer/BioNTech vaccine to the UK by the end of the year.

“While the details of this agreement are confidential, we can confirm that Q1 deliveries remain on track and continue to progress in line with the monthly schedule, agreed in advance with the Vaccines Taskforce.”

And AstraZeneca said in a statement: “Our UK domestic supply chain is not experiencing any disruption and there is no impact on our delivery schedule.”

Responding to the drug companies’ statements, the Department of Health told Sky News: “As has been the case since the programme began, the number of vaccinations carried out over time will vary due to supply – but we remain on track to offer a first vaccine to over 50s by 15 April and all adults by 31 July.”

Although Mr Hancock has given no reason for NHS England’s supply warning, Whitehall sources deny the slump means there will be no first doses in April or that under 50s will have to wait until May to be vaccinated.

Sources also deny the supply issue is due to the European Union’s threat, which Foreign Secretary Dominic Raab has condemned as brinkmanship of the kind operated by undemocratic regimes. 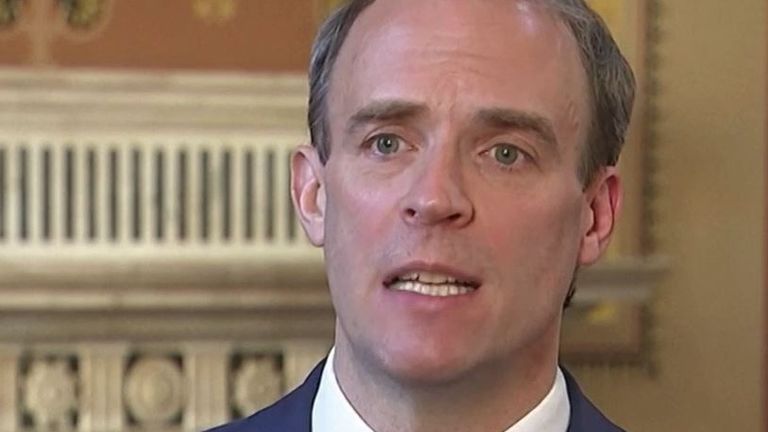 The hard-hitting NHS England letter which triggered the row states: “There will be a significant reduction in weekly supply available from manufacturers beginning in the week commencing 29 March, meaning volumes for first doses will be significantly constrained.

“Inviting patients outside of cohorts 1- 9 is only permissible in exceptional circumstances. Those aged 49 years or younger should not be offered vaccination unless they are eligible via a higher cohort.”

Reacting to the threat of vaccine shortages, Tory MPs claimed it may mean Boris Johnson is forced to postpone some of the four steps in his roadmap towards ending lockdown restrictions in England.

“I imagine it may slow down the easing of some of the restrictions,” GP and former junior health minister Dr Dan Poulter told Sky News.

“They will be data driven and evidence led anyway. But it may mean some of the re-opening of the economy may be slowed down a little bit further.

“As things stand at the moment we seem to be getting on top of virus due to lockdown and vaccines and that’s good news. But we are not though this yet.”

Labour’s Shadow Health Secretary Jonathan Ashworth said: “People across the country will be anxious and worried that the booking of new first dose vaccination appointments will be paused form the end of March.

“Matt Hancock needed to explain exactly what these supply issues are and what he is doing to resolve them. Trying to dismiss or downplay the legitimate concerns of anxious people waiting for a vaccine is simply not good enough.”

Pubs fear they may have to close for good without more energy bill support, industry bosses warn

Pubs fear they may have to close for good without more energy bill support, industry bosses warn